This is the research done for Las Malvinas botica popular fiber-crete 2013.

The Dominican Republic has an average annual temperature of about 25 °C (77 °F) which is defined as a warm tropical climate. The higher temperature, about 34 °C (93 °F), recorded in the months from June to August, and the lowest, 19 °C (66 °F), recorded between December and February.[3]

At the block-making site where we have been allowed to press our blocks, they use a mixture of sand, gravel, cement and water to make their blocks. For our blocks, we are replacing sand and gravel with other materials and in using rice hull ash and lime we hope to utilize less cement, making a cheaper and lighter block. The mixture used on-site that we are comparing to is 3 wheelbarrows of sand, 1 wheelbarrow of gravel, 1 bag of cement and 2 buckets of water, which makes around 33 blocks.[5]

Cement is not enough to make a block by itself. Sand and gravel give blocks their structure, held together by cement "glue". In these experiments we are mostly replacing sand and gravel with our alternate materials.

The raw materials used in the creation of concrete blocks typically include sand, gravel, and cement, but can vary depending on purpose and available materials. These materials are kept separate and dry until ready for pressing. They are then consolidated by using large mixing blades and adding water until the desired texture is reached. The mixture is then placed into a mold in a large machine that applies high levels of pressure to the mixture. Four blocks are produced at a time by the machine used in Las Malvinas. The curing process requires that the drying process is controlled so that the blocks do not dry too quickly, which would result in cracking. This is controlled through watering down the blocks several times depending on local climate.[10]

A fellow student and past Practivista at UNIBE shared some of his current research from making blocks with sawdust and other materials. In his experimentation he is using sawdust as a replacement for river sand. This is a potential area for experimentation in this project. His blocks were very durable and able to withstand approximately 2,900 Newtons of force.[11] 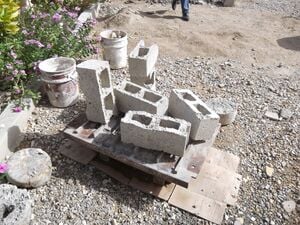 The papercrete blocks from 2012

Sawdust is considered a waste that is created during the manufacturing of coffins and many other products. It is a waste product that, if not added to the general waste stream is often burned. It often is not removed from the creation site, which allows it to become a hazard for fires and air quality.[18]

In the community presentation with Las Malvinas rice hulls were mentioned as a potential resource for the community. A study done in India analyzed the possibility of using rice hulls in concrete blocks. In the study rice hulls were added at 0.5, 1.0 and 1.5 percent as compared to the amount of concrete added to the mixture. Although workability of the concrete decreased, other factors such as tensile strength, impact strength, displacement and energy absorption were improved significantly. Also, the blocks with rice hulls added were found to tend to crack before failure as opposed to the plain concrete blocks, which would tend to fail without much warning.[25]

Rice hulls are the protective layer surrounding the rice grain that is composed of silica and lignin.[26] Composting, open burning and livestock feed are some of the common ways to reduce waste of materials from the food industry.[27] Rice hulls have been used in construction because of its potential low water absorption, thermal resistance and insulative properties. These properties resist expansion and absorption, which has allowed rice hulls to be used successfully as infill for houses..[28] Rice hulls have a water absorption of 123.7%.[29]

One recipe for rice hull blocks from the book "Rice"

A study published in India's NBM Media site suggested the use of 10% by mass rice hull ash (RHA) to enhance various properties of cement. Resistance to acidic environments, compressive strength and surface moisture of cement blocks were all found to have increased with the addition of approximately 10% RHA. This also counts for use in mortar. Concrete blocks fared best with 12.5% RHA.[31] A Brazilian study concurred, finding that 10% RHA decreased total water absorption by up to 38%. Compressive strength increased, with mixtures both of 5% and 10% RHA (5% having a greater compressive strength). These blocks were aged up to 28 days.[32] The Center for Vocational Building Technology suggests using 30% rice hull ash in a cement mixture, and that the quality of performance is on par with 100% cement.[33]

RHA is produced by the burning of rice husks and is a common by-product of rice production.[34] In Las Malvinas, there is a nearby producer of rice husk and also rice husk ash as a by-product of their activities. Rice husk ash is composed of 90-95% silicon dioxide and can improve the workability, stability, reduce cracking and reduce plastic shrinkage of cement.[35] It is also of interest for this project particularly for its ability to decrease the amount of cement needed.

Mortar can be made with cement, sand, and sawdust, although these mixes are known to be weaker than "traditional" mortars.[37] In a test of cement/sawdust mixtures, over 10% sawdust in a mortar decreased the compressive strength by more than half. Mixtures of 10% and less still had a significant effect upon the compressive strength of the mortar.[38] It is possible to utilize a lime-cement mortar, which consists of 1 part lime to 3 parts sand. Another option is to utilize compo-mortar which consists of 1 part cement, 1 part lime and 6 parts sand.[39]

The finish used in the 2012 schoolroom project was composed of:

The roof of the Botica Popular will likely be of zinc sheets, similar to the 2012 schoolhouse project. 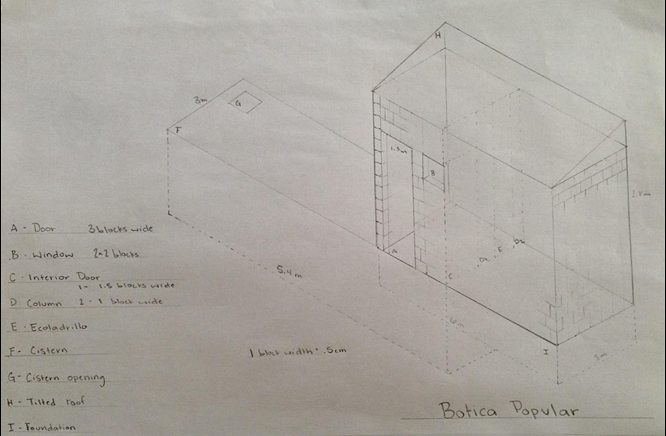 Page data
Retrieved from "https://www.appropedia.org/w/index.php?title=Las_Malvinas_botica_popular_fiber-crete_2013/Literature_Review&oldid=622187"
Cookies help us deliver our services. By using our services, you agree to our use of cookies.
Categories:
Maintenance categories:
Comments
Privacy policy · About Appropedia · Disclaimers · Mobile view · Content is available under CC-BY-SA-4.0 unless otherwise noted.
</html