From Appropedia
Redirected from Lancashire 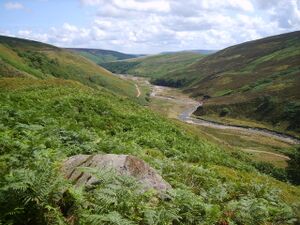 Lancashire ( LAN-kə-shər, -⁠sheer; abbreviated Lancs.) is the name of a historic county, ceremonial county, and non-metropolitan county in North West England. The boundaries of these three areas differ significantly.

The non-metropolitan county of Lancashire was created by the Local Government Act 1972. It is administered by Lancashire County Council, based in Preston, and twelve district councils. The ceremonial county has the same boundaries except that it also includes Blackpool and Blackburn with Darwen, which are unitary authorities. The historic county of Lancashire is larger and includes the cities of Manchester and Liverpool as well as the Furness and Cartmel peninsulas, but excludes the Bowland area of the West Riding of Yorkshire transferred to the non-metropolitan county in 1974.

The ceremonial county borders Cumbria to the north, Greater Manchester and Merseyside to the south, North and West Yorkshire to the east, and the Irish Sea to the west. Although Lancaster is still considered the county town, Preston is the administrative centre of the non-metropolitan county.

Community-powered support for Fylde on getsatisfaction.com

In 2005, Lancaster was one of six English towns chosen to be cycling demonstration towns to promote the use of cycling as a means of transport.[1]

May 6 - 7 National Festival of Making

Don't frack with us: meet the victorious activist 'Nanas' of Lancashire, Oct 13[2]

In an era of brutal cuts, one ordinary place has the imagination to fight back, Aditya Chakrabortty, Mar 6[3]

Page data
Retrieved from "https://www.appropedia.org/w/index.php?title=Lancashire_community_action&oldid=656180"
Cookies help us deliver our services. By using our services, you agree to our use of cookies.
Categories:
About Appropedia · Policies · Contact · Content is available under CC-BY-SA-4.0 unless otherwise noted.