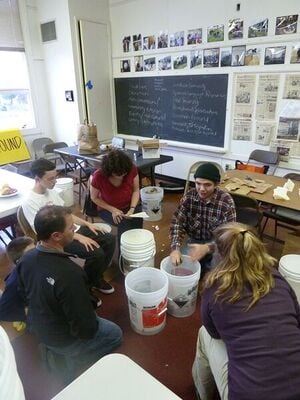 The Westside Community Improvement Association is a grass-roots organization in Eureka, California working to revitalize the local urban neighborhood by restoring the Jefferson School site. Last April, they won the bid to purchase the site which they are working towards turning into a community center and charter school. One of their first tasks was to reopen the playground for local children who had nowhere else to play. For this project, community members will collaborate to facilitate a sustainability teach-in where low-to-no cost technologies can be shared and implemented within a diverse community.

The objective of this project is to integrate what the community wants to learn about appropriate technology into a cohesive workshop, and then to advertise and facilitate said workshop.

Not only are we teaching about appropriate technology, we are part of an organization that is working toward community building on the Westside, so our project must reflect that. As Brazilian educator Paulo Freire insists, "It is not our role to speak to the people about our own view of the world, nor to attempt to impose that view on them, but rather to dialogue with the people about their veiw and ours" (96).[2] Community involvement and cultural sensitivity are two topics that must be considered throughout our project. We are interested in building a relationship with the community members, and viewing the teach-in as something done with the community, not for the community.

Community Building: What Makes It Work attempts to synthesize the research literature on community building to examine what makes a community successful. How do initiatives and organizations capitalize on the community's strengths? How does the community itself increase social capacity? What does it take to unify a community? The authors describe community not just as a "geographically defined area" but also people who have "social and psychological ties with each other and the place where they live" (Mattessich 6). The various characteristics of the community, the process, and the community organizers are outlined. Chapter Three describes the "Factors Related to Success," including community awareness of an issue and motivation within the community. It is clear that a clear system of communication is necessary for any community building to be successful.[3]

The Westside in Eureka is a ethnically diverse area. This is an element that we will treat with respect and forethought in planning our teach-in. The chapter in Building Community- Social Science in Action addressed community building in a diverse setting. Being culturally sensitive is very important. People of different backgrounds and languages may present a challenge but the case study presented showed that success is possible.[4]

The most useful tools in Building Communities from the Inside Out are the various "webs" that outline how to strengthen partnerships in the community. The book focuses on the power that the relationships between people, organizational groups (including churches, colleges, schools, and neighborhood groups like Westside Community Improvement Organization), the private sector and city governments. The graphics show these webs as a means to link the community together at every level.[5]

In the book The Revolution Will Not Be Microwaved, topics of cultural survival and food security are hand-in-hand. Seed saving is marketed as a political act as the current food model in the United States is put under the microscope. The book even includes a recipe for soaking and sprouting seeds on page 71. Author Sandor Ellix Katz highlights the importance of the community level as the first step in restoring their relationship with food. He mentions people organizing around themes of food justice and food security.[6]

Following are five initial criteria which we have chosen to judge the success of our project.

Because much of our project depended upon responding to the needs of the community, we spent time canvassing the neighborhood around the Jefferson School. To determine which workshop we would teach, we narrowed the choices down to small-scale composting, vermicomposting, seed starting, and window boxes. We surveyed the neighborhood, walking door to door and conducting an informal survey to gauge the neighborhood's interest. We had been introduced to a bilingual HSU graduate, Alexandra McGee, who joined us canvassing as a collaborating volunteer. Her linguistic skills and cheery attitude were invaluable in communicating with Spanish speakers in the neighborhood and jump-starting the project's momentum.

The design of our project is two-fold: First, it includes the curriculum that will be presented at the teach-in. Second, the design includes how we will advertise the event and what means we will take to include as many neighborhood members as possible.

Information to neighborhood: We will canvas the neighborhood, knock on doors, and talk to citizens face-to-face about the Jefferson Community Center and the teach-in. We will hand out fliers and post them around the neighborhood. We intend to start early with the canvassing so that word of the event has time to spread on its own. We will work with Humboldt County to ensure that translating services are present during the teach-in. We distributed both English and Spanish flyers. Curriculum: The curriculum for the teach-in will revolve around indoor gardening, from seeds to soils. We will have containers on hand for the participants to use and bring home with them. Additionally, the teach-in will address maintenance concerns, and prepare participants for harvesting their food when the time is right. Local history may also be shared to foster an appreciation for the neighborhood. Here is a basic outline of the curriculum.

Composting: The curriculum for the teach-in will revolve around composting with worms (Vermiculture). We will have containers on hand for the participants to use and bring home with them. Additionally, the teach-in will address maintenance concerns and what to do with the soil that is produced. New Design:

After surveying the neighborhood and assessing community interest, we planned to teach a three-bin vermicompost system. We have created a page to teach users how to Build your own 5-gallon vermicomposting system.

Our prototype designs, a two-bucket and a three-bucket system, are still thriving after a month-and-a-half. They are fed three times a week and consume most of the scraps placed in the bins. As of yet, they have shown no signs of reproduction. We chose the three-bin system per request of our client, and were enabled to provide it by the generosity of our donors. One thing we realized is that landscape fabric is difficult to affix to the top of the system in the absence of a lid. We initially used a rubber band, but this made accessing the system on a regular basis difficult. Luckily, we had enough actual lids to fit on every system provided at the workshop.

The above budget provided materials for 12 families (potentially) to take home a three-tier vermicompost system.

The workshop was held on April 19th, 2012 as planned. The attendance was approximately 20 people and we distributed 8 systems.

The flow of the workshop was as follows:

We encouraged the participants to ask questions at every step of the workshop. This was an effective method because of the size of the workshop- if there had been substantially more participants, this question method would not have been so smooth. We were trying to create an open, comfortable learning space where asking questions was easy.

Page data
Retrieved from "https://www.appropedia.org/w/index.php?title=Jefferson_Community_Center_vermiculture_teach-in&oldid=644420"
Cookies help us deliver our services. By using our services, you agree to our use of cookies.
Categories:
Maintenance categories:
About Appropedia · Policies · Contact · Content is available under CC-BY-SA-4.0 unless otherwise noted.