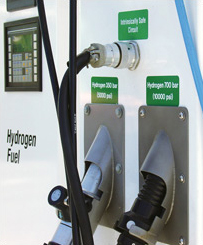 A hydrogen station is a storage or filling station for hydrogen, usually located along a road or hydrogen highway, or at home as part of the distributed generation resources concept.[1] The stations are usually intended to power vehicles, but can also be used to power small devices.[2] Vehicles use hydrogen as fuel in one of several ways, including fuel cells and mixed fuels like HCNG. The hydrogen fuel dispensers dispense the fuel by the kilogram.[3]

In 2000, Ford and Air Products opened the first hydrogen station in North America in Dearborn, MI.[4]

Since the turn of the millennium, filling stations offering hydrogen have been opening worldwide. However, this does not begin to replace the existing extensive gasoline fuel station infrastructure, which would cost a half trillion U.S. dollars in the United States alone.[5]

The hydrogen fueling stations include the following: