Hexayurt
Welcome to the home of the Hexayurt project
Project data

This page describes an adaptation of the Semi-Folding Hexayurt design to the Pentayurt aka H10. If you have not done so, read Camp Danger Hexayurt Hinge Technique first.

There are two differences between a Hexayurt and a Pentayurt that impact the semi-folding design.

A Pentayurt has an odd number of sides. This means splitting the yurt in half will not result in identical parts as it does with a Hexayurt.
The angles between panels are different. A normal loose hinge will not bend far enough for a Pentayurt.

The Camp Danger Design calls for two half-roofs made from three kites each. A Pentayurt has one less side and therefore one less kite. If you build a three-kite side and a two-kite side it will assemble, but it will not pack flat. To pack flat each side must have the same number of small-triangles. Each side will use a two-and-a-half-kite design. Also note there will be a left-side and a right-side half, and the halves are not identical!

Laying Out the Triangles[edit | edit source]

Each half-roof is made of five small-triangles. Unlike the Hexayurt design, you will need to form one tight-hinge and one loose-hinge on playa. When laying out the triangles be sure the leg of one half meets the leg of the other to form a tight-hinge, and the same for the hypotenuse to form the loose-hinge. If you build identical halves a leg will meet a hypotenuse and you will be unable to assemble the roof. 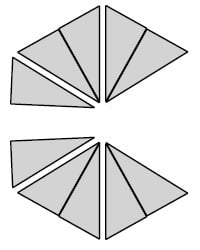 This is not a major concern for the semi-folding design, but may be useful to know if you care about pointing all the logos inwards. If you cut your triangles from the minimum of five panels you will be unable to hide all the logos. If you cut three panels logo down and two logo up you will be left with nine triangles with logo in and one with logo out. I know of two solutions to this. You can cover the offending logo with aluminum tape. You can cut a sixth panel and discard the extra two triangles. (Or gift them to another Pentayurt builder)

The sharper angles of the Pentayurt require changes to the loose-hinges. The numbers do not come out as clean as they do in the Hexayurt. The required gaps for loose-hinges are as follows:

If you are interested in the math read on.

The important angle when finding the required tape gap is the angle formed between the panel edges. Imagine two wall panels without tape but otherwise placed correctly. There is a small V shaped gap when viewed from the outside. The angle at the base of this gap is the important one. I will refer to this angle as θ. 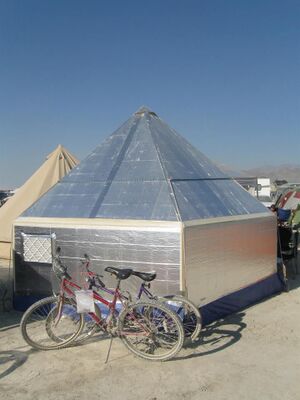