Text liberally taken from https://groups.google.com/forum/?fromgroups#!topic/hexayurt/jEMKE11jw5M This page needs polish, use at your own risk, look at other hexayurt pages, etc! LucasG 08:57, 23 August 2012 (PDT)

Gavin Harkness developed a design for a shelter made out of four polyiso panels that is simple to build. It's intended as a 2 people hexayurt, made from 4 sheets of 8x4, and can be built with as little as 4 cuts.

It was shared just a couple of weeks before Burning Man 2012, so not much real testing done yet! Just so you know!

The original design goals were:

There are 8 pieces: 2 roof pieces and 6 wall pieces:

There are several ways to build a 4-panel hexayurt (H4). is really a family/group/set of designs.

Below are three ways that use only 4 cuts. Simple: "procrastiyurt".

If you make the "tall" panels using the offcuts from the roof, you can divide the wall panels into neat thirds (2 boards gives six identical wall pieces) and have a slightly higher unit, and zero waste.

It meets your goals of zero waste and increases living space. From what I remember, some of the reasoning why I decided against it was:

It's one of the beautiful things about the hexayurt, you can adapt the design to meet your needs.

Not sure what the best taping order would be for the playa. I guess it partly depends on how many people are available. Effect of wind on flaps remains to be seen, and how do you fix it to the ground? 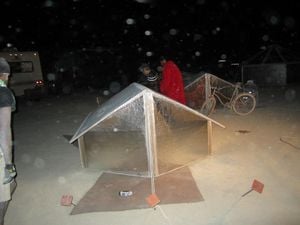 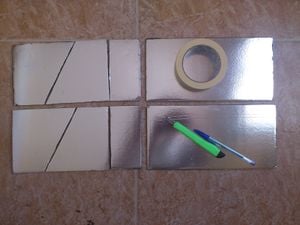 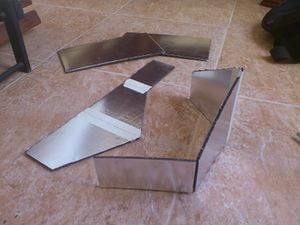 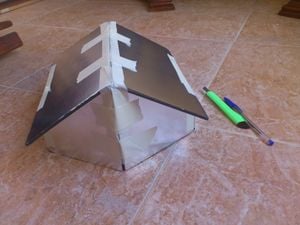 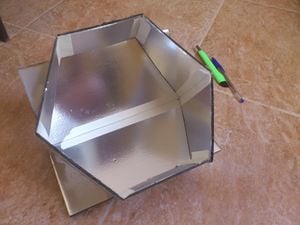 There was only one real issue, due to the 1" thickness of the panels there is a cumulative size issue which means you have to shorten the two side panels by about 2". You can see the gap before I did that in one of the pics attached.

Size is perfect for 1-2 people and it seems to be very strong, will know how strong when taped on the playa.

How much tape would it take to build an H4 if you are trying to economize on tape? I have 1 roll, seemingly plenty for an H2. Would that be enough for an H4?

Look at the other hexayurt construction details, and base the door off their recommendations.

For plywood, halving the number of cuts (and keeping half the panels whole) is important. Plus you get more places (outside, below the roof) to put blocks and then run screws through.

This may well be my first real size yurt ever: plywood, 4 cuts plus a door, will look at how to waterproof the very top. Basically, a third of the cost of an H12, which I wouldn't use anyway. More portable, too! And, not sure, buildable by a single person?

It maybe possible to build it using slotted plywood, similar to the way these guys build furniture:

So that it could assemble without screws and use either a tube of silicone or duct tape to seal the joints.

It maybe possible to create a kit where the panels have perforated cuts, predrilled holes, ready for someone to"break" the kit open and quickly assemble the shelter. The perforated side/end panels would be sandwiched between the two roof panels for transportation. These could be assembled, with 2" timbers precut at the required angle, with some wood glue, a handful of screws and a screwdriver (or for us lazy people, a electric drill).