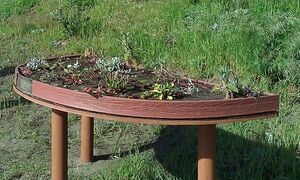 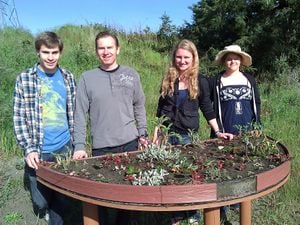 The model green roof, located along the Living Green Interpretive Trail at Friends of the Dunes.

Friends of the Dunes is a non-profit organization, and works to protect and preserve the natural habitats of the dunes. Their Coastal Nature Center is a place where they promote green solutions by educating visitors. Construction started on the nature center in 2007, and there are still a few outstanding projects that need to be completed. One of the projects is a green roof on the west awning. As part of the Engr215 Introduction to Design course, we were given the opportunity to design the green roof, and build an educational model of it.

The objective of the project is to design a green roof for the western awning at the Humboldt Coastal Nature Center, and to build a model of the green roof that educates visitors and enhances the aesthetics of the Center.

There were two parts to our project: the design of the green roof for the western awning and the model of a green roof.

Using the criteria and their respective weights we picked a design that looks professional and allows plants to survive in the summer. Once built, it will have a low weight, and can be built without threatening the structural integrity of the building. Plastic Bend-A-Board is used for the retaining wall, with the components of the green roof layered behind. Hydrostop waterproofing paint is applied once more to roof to ensure the roof will not leak. The base layer of the roof is a protection fabric to stop roots from growing into the roof, and is followed by a synthetic drainage layer. The synthetic layer is a light material, and with its many pockets to hold water, will assist in keeping the roof green during the dry months, while removing excess water during the rainy months. On top of the drainage layer will be a separation filter fabric. Four inches of native soil will be placed on top of the filter sheet to be used as the growing medium. An erosion control blanket placed on top of the planting medium will stop the soil from getting blown off or washed away during winter storms. It is made of a biodegradable material, and is only expected to last until the plants are big enough to hold onto the soil themselves. A micro sprinkler system will be installed on top, to provide water during the summer. These layers of the roof will create a habitat on top in which native plants can thrive, and an effective drainage system on the bottom.

The scale model of the green roof consists of a half-circle table that is six feet in diameter, four feet in radius, and supported by three wooden posts that are secured to concrete blocks buried in the ground. It is installed on the Living Green Interpretive Trail in front of the nature center. Beside the model is an informational sign that explains what green roofs are and the benefits they have.

Here are the estimated costs for the Western Awning green roof design implemented:

The costs of the materials used for building the model green roof:

Labor Hours include the total amount of hours spent by the team in the design, research, and construction steps. 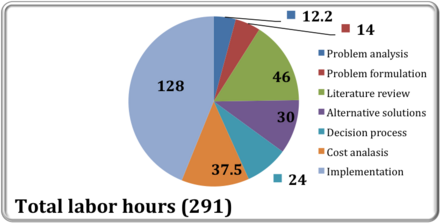 The model of the green roof is installed on the side of the Living Green Interpretive Trail, and the following steps were done to construct the model: 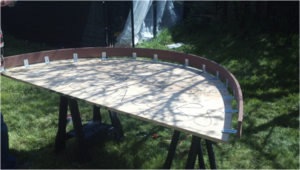 Step 1
Construct the representation of the roof using plywood and attach L brackets to Bend-A-Board.
2 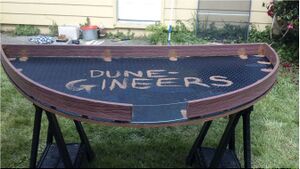 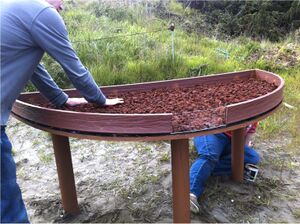 Step 5
Apply soil medium, pack it down, and plant.

The living roof display is no longer standing. It dried out very quickly and was a maintenance issue to keep watered. Since the model was so small it did not retain much water and dried out quickly. The maintenance of the model required frequent watering. During the increasingly hot summer months, the heat could dry it out in a day and the plants suffered.[1]

The living roof on the FOD however, remains as a great example of Leadership in Energy and Environmental Design Certification. The roof was fixed and includes layers of waterproofing material, insulation, and drain mat and roof barrier. The sand was formed over the roof to match the contours of the dunes to provide a more natural medium for native dune plant species. It is filled with native plants excluding a few invasive grasses however, it is weeded and maintains moisture due to its contoured design. Roof planting began January 2011 and a biodegradable erosion control fabric kept the sand in place to help native plants establish.[2]

Living green roof Green roofs or living roof is a roof designed to be partially covered or fully covered by vegetation and a growing membrane. This is all built over a drainage layer to prevent water build up. Under the drainage layer there is a waterproof layer that allows the water to run off. Under that there is an isolation layer to keep the inhabitants comfortable. And lastly, there is the concrete that holds up the entire living structure. Currently the living roof is still in use and has a bit of a rattlesnake grass problem. Furthermore, they have an intern who comes in once a week to water the small trees surrounding the structure. The trees were planted around two years ago, and have only grown a couple of feet in the two years.

Page data
Retrieved from "https://www.appropedia.org/w/index.php?title=FOTD_living_green_roof&oldid=640139"
Cookies help us deliver our services. By using our services, you agree to our use of cookies.
Categories:
Maintenance categories:
Comments
Privacy policy · About Appropedia · Disclaimers · Mobile view · Content is available under CC-BY-SA-4.0 unless otherwise noted.
</html