Cider Cool Off the Press

Story and photographs by Rick Bishop

Of the many people who have tasted apple cider, I doubt if many of them have had the privilege of tasting cider right out of the cider press. The apple cider available at grocery stores does not compare with the sweet taste of cider straight from the press. Though there is quite a bit of work involved in making just a gallon or two of sweet cider in the small press, when the cider meets the taste buds you can be sure that it was well worth it.

Esther Griffin owns a cider press like the ones the old timers used and she invited the staff of BITTERSWEET to her farm to show us how to use it.

A cider press is simply a hand operated machine that grinds up whole apples and then squeezes juice from the pulp, thus making cider.

To describe it briefly, it stands on four legs, is about three feet long, one and a half feet wide and about four feet high. On one end is a chute, or "hopper," into which the apples are poured. Under the hopper are gears which are turned by a crank operated by hand. These turning gears quickly transform the apple into pomace or ground up fruit which is caught in a slat located directly below the hopper.

This cider press, probably an antique, still makes cider just as sweet as ever.

At the other end is a metal plate lowered by a threaded shaft when it is turned clockwise which presses the juice from the pomace out of the slat.

The most commonly used apples for cider are jonathan or winesap, but for a sweeter cider Esther suggests red and yellow delicious apples. The quality of the apples need not be that of table fruit as long as they contain no insects, and have not been sprayed or are rotten, so most of the apples you have on hand that are not good enough for other purposes may be used for cider. Notice should also be taken that the apples are not in brown decay for the cider will ferment too rapidly.

Once you have located a cider press, and when you have gathered your apples, you are ready to begin. It usually takes a bushel of apples to yield two-or three gallons of cider.

It takes two people to operate the cider press effectively. While one person pours the apples which are whole, unpeeled, and washed into the hopper a few at a time, the other turns the crank, thereby turning the gears inside the hopper which grinds the apples into pomace. This pomace is thrown downward, out of the hopper into the slat located directly below the hopper. A slat somewhat resembles a bottomless bucket; the sides of the slat are made of vertical strips of wood which do not quite touch, thereby letting juice seep out when the pomace is pressed.

When the slat is full you are ready to press the juice out of it, although some cider lovers prefer to let the pomace be exposed to air for about a day and then ground again.

The squeezing of the pulp is done by a metal, threaded shaft with a metal disc attached to the bottom of it so that when the wheel on top of the shaft is turned clockwise, it lowers the disc. The slat, which is filled with pomace, is moved down the trough so that it is now under the metal disc. A wooden disc the same circumference as the slat is placed on top of the pomace in the slat. This wooden disc is pushed through the slat by the metal disc as the wheel on top of the shaft is turned clockwise, thereby forcing almost all of the juice contained in the pomace to seep out and run down to the floor or trough of the press. this trough is slanted in such a way that all of the juice will run off into a container on the ground beneath the press. This container cannot be aluminum or any other unglazed metal container or the taste of the cider will be bitter. This entire process takes about fifteen to twenty minutes.

Most cider presses have two slats so it is possible to squeeze and grind at the same time.

When you have squeezed all the juice that you want, you are ready to strain it. This is done by fitting a clean cloth like a dish towel or cheese cloth over another container and pouring the cider into it, then removing the cloth.

After straining the cider you are ready to store it for aging. Cider does not have to be aged; it can be served right away, but as you will probably want to store part of it, you must know the process.

Cider can be stored in jugs, bottles or jars, but be sure you use sound glass or the container will burst with increasing fermentation. Cover these containers with cotton-wool plugs and store the cider at room temperature. Do not put the plug in too tightly or it will not ferment properly.

In about four days you will begin to see sediment settling on the bottom and you should notice fermentation bubbles forming on the top. For a mild sweet cider, ciphon the liquid away from the sediment and store in a cold place for immediate use. Do not disturb the sediment on the bottom of the container.

Now that you know basically how to make apple cider you may want to keep your eye out for a cider press. It would be a profitable investment in addition to providing some good drinking.

1. Esther Griffin places the slat under the hopper.

2. Apple pulp falls from the hopper into the slot below. 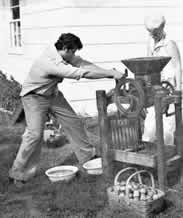 3. Steve Hough strains to squeeze the last few drops of juice from the pulp.

4. This is what the apple pulp looks like after being pressed.