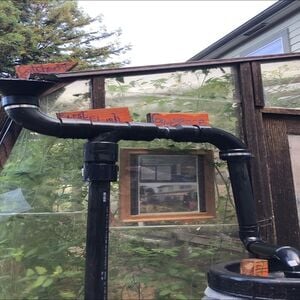 The Greenhouse Rainwater Catchment System is introduced to CCAT through ENGR 305: Appropriate Technology. The purpose of the system is to supply water over the summer to the Greenhouse plants through the Storage Tanks and the Hugelkulture bed through the Overflow. The building and materials of the system are simple consisting of only 8 parts! The parts being: Catchment Surface, Gutter, Filtration, First Flush, Conveyance, Storage, End Use, and Overflow. This system is designed to ensure Appropriate Technology standards that are locally sourced, communally accessible, and environmentally less harmful than conventional, industrial water systems in the United States.

Outside CCAT sits a sloping glass greenhouse. Many changes have occurred in and around the structure during its time at the Campus Center for Appropriate Technology including separation from the main building, construction of a new wall using beach grass as insulation, and a floor reconstruction that's occurring concurrently with our project to build a rainwater catchment system for the greenhouse. CCAT wanted a rainwater catchment system to be built off the greenhouse to catch the rain that would just run down the building and into the ground below. The water captured from the rain will ensure that the plant life at CCAT will be adequately watered when necessary.

The CCAT Greenhouse as of February 21st 2019

Below is the criteria for the greenhouse rainwater catchment system. The criteria are scaled from 0 - 10, 10 being the most important.

Rainwater design has been worked with for millennia. Ancient civilizations in modern day India and Israel are recorded using catchment methods as early as 3000 BC. Later on, the Romans developed vast systems of aqueducts, gardens, and pools all fed by rainwater. Since then rainwater catchment has gone into and out of style many times as other technologies developed, but it remains a reliable and sustainable way of accessing and storing water. There is no one way to catch rainwater and design varies depending on many different variables including location, weather patterns, end usage, community utilization, etc.

The parameters for these systems are rainfall, catchment area, collection efficiency, tank volume, and water demand. Systems should be tailored specifically to the community they're serving, so a good place to start your design process is on the ground with the people who will be using it.

Catchment design can be broadly categorized into active and passive systems. Active is a system that is built and maintained through human activity. Passive is a system mostly in place in the environment that is initially worked on and then maintained by humans. We'll focus on active systems as the project we are working on will fall into that category.

For active systems, there are some fundamental components.

For each of these components there are different materials and technologies you can use.

This project takes place at CCAT located on the campus of Cal Poly Humboldt in Arcata, Californa. Arcata receives about 46 inches of annual average rainfall with an annual average temperature of about 53 degrees Fahrenheit. The city receives its most rain during the months of November, December, January, and February. An average year in Arcata receives 175 days of sun and on average, 77 days of precipitation.

The CCAT greenhouse is located outside of the CCAT building. The greenhouse is constructed of a Beach Grass Clay Slip Wall and a Sturdi-Built prefabricated greenhouse structure. The frame is made of redwood, which is resistant to decay. Preventing decay in a greenhouse structure should be cheap, effective, and non-toxic to plants and animals. The highest recommended solution against wood rot is a redwood stain. With the high amount of rainfall that is present in Humboldt County, it is important to ensure the structure is secure. During the Summer the greenhouse requires additional water. In addition to the greenhouse, water is needed to care for surrounding plants and crops. Agriculture is the largest consumer of freshwater. By cutting down the overall water needs for CCAT's agriculture and greenhouse, it can become a high opportunity for a positive environmental impact.

Filtration for our system involves a series of mesh filters that catch debris. The first of these is found at the end of the gutter system. It's an angled black funnel with mesh silicone to the rim; as rainwater falls from the gutter, it passes through the mesh while larger debris is reflected and bounce off. The second filtration system is the mesh lid leading to the first storage tank. This final filtration guarantees that no larger debris end up in the storage system.

Costs for materials bought throughout the project that were required to complete the project to best of our ability.

System should be inspected every few months to make sure that there are no leaks. If the system has any holes the water will find them and make them apparent.

Make sure that the screen over the funnel is cleaned off whenever there is a large amount of debris of leaves covering the screen. If the screen gets covered, it makes it harder for the water to make its way to the first flush, through convenience and ultimately to the storage units.

Check gutters for any plant matter, such as twigs, sticks, and leaves, to make certain that all the water you are catching can make it's way uninterrupted through the system.

The process of conceptualizing, designing, and implementing this rainwater catchment system has been… a time. Looking back, there are many things we would have done differently. That being said, we are proud of the work that was done and approve of the system in place today. If we were to reconstruct this system, we would ensure our gutter system is correctly assembled (or better yet have the gutter be one continuous piece) and angled before officially attaching it to the Greenhouse. We also would have liked to use more solidified and standard rainwater catchment tanks. Our tanks were based out of up-cycled pickle barrels that took more effort in transforming than we had anticipated. This brings us to what the next steps are for this system. Make sure the system is inspected regularly for leaks and clogging. The funnel at the top of the conveyance system will need to be periodically cleaned and the first flush is detachable in order to allow future moderators to inspect it. Furthermore, there is a small leak where the first flush connects to the larger conveyance system that moderators should be aware of. Our main focus for this project was education, and we feel that we have provided a clear and practical understanding of rainwater catchment systems.

The purpose of the greenhouse rainwater catchment system was to catch the rainwater along the catchment surface of the greenhouse. The water that falls onto the catchment system is then transferred along the gutter, into the initial filter, eventually being stored in the storage tank for future usage.The water that is collected is not solely used for watering the plants inside the greenhouse. The stored water is used in the summer months for watering plants when the rain is low. Ideally, maintenance is performed once a month and does not take long, however, at this point in time it has not been top-priority for the CCAT staff.

Overall, the greenhouse rainwater catchment system has held up and is doing its job. The system is still relatively new, however, there are some components of the system that could be improved.

First, some parts of the system were not secure. The support system for the first flush is being held by two 2x4" wooden planks which are not secure. Additionally, the initial filter is not fastened by anything to the first flush, which meant it could fly off in adverse weather conditions. Overall, the rest of the support system was still intact and doing its job. The bricks and river imported rocks under the storage tanks were still upholding.

Third, the end usage was not user accessible. It was difficult to place a bucket underneath the water spouts to collect the rainwater. A potential solution that was discussed would be to either raise the end usage or to install a water hose onto the storage tanks. Installing a water hose onto the storage tanks was more likely to happen. Building an irrigation system that automatically waters the plants inside the greenhouse would be another potential solution.

We want to thank Lonny Grafman for providing us with the in-person and knowledge to complete this Rainwater Catchment System. Through his support and skills, we were able to easily and successfully catch the rain. Through their "To Catch The Rain" book, our project was defined through a step by step process as to how to construct, use, and maintain the system. We are proud to call ourselves Appropriate Technology students at Cal Poly Humboldt.