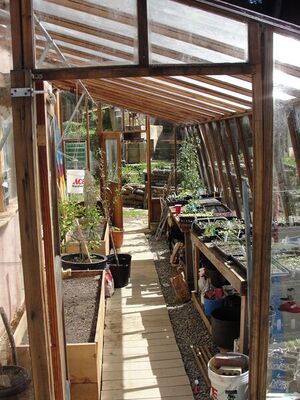 The CCAT greenhouse is a prefabricated model from Sturdi-Built which is a greenhouse manufacturer based in Portland, Oregon. The CCAT greenhouse is a lean-to Garden Sun Room model frame and glazing. It is supported by a freestanding beach grass and clay slip wall. The frame of the greenhouse is made from Clear All Heart grade redwood that is resistant to decay. The glazing in the greenhouse is of various types. The glass in the roof and door is tempered safety glass and the wall glass is standard lapped glass. The redwood beams of the roof are also designed to channel condensation down to the side of the wall and to drain spouts to keep water off of gardeners. Ventilation of the greenhouse structure comes from three sources. Cooler air is allowed to circulate in through the ground level, low wall, screened vent panels. In addition there are the mid wall slat vents called Jalousie Windows. Hot, moist air is allowed to escape through the roof vents to control temperature and humidity. These are the key factors in greenhouse success. These vents are the most crucial and are operated by solar powered Bayliss MK7 vent openers. These openers contain a wax that expands as temperature rises inside the greenhouse, causing them to extend and open the roof vents and allowing warm air to escape due to convection. Typically, greenhouses are heated with a small heater during the cold months of the year. However, given Arcata's mild weather and the thermal mass of the beach grass clay slip wall, no additional heating source is used in the CCAT greenhouse.

Maintain the greenhouse structure and wall. 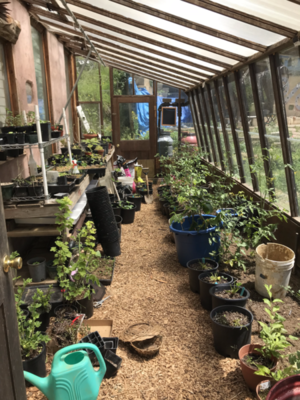 Inside the new and improved CCAT greenhouse.

In 2016 the floor of the greenhouse in the picture at the top of this page was replaced with a completely wooden platform that covered the entire greenhouse floor, as opposed to the walkway through the middle. This created several problems. First, floor was built on top of a frame which was elevated above the ground. This created a draft coming under a large gap in the door of the greenhouse that resulted from the elevated platform installation and cancelled out the greenhouse temperature control mechanisms. The wooden floor also started to rot out. This was likely caused by the fact that the floor had not been refinished on time. To avoid having to continually refinishing it and avoid any potential safety hazards from the rotting floor, it was decided to simply remove it.

Two different plans were created to replace the floor. The original plan was to dig out 1 foot of the existing gravel and clay and replace it with soil on either side of the house and a gravel pathway in the middle. This plan had the advantage of being fast and easy to implement. The second plan was to construct a elevated walkway which would rest on perpendicular beams that would stretch from the north wall to the south wall. The benefits of this plan are that the walkway allows people to move through the greenhouse without compacting soil and was designed in such a way that the draft from the previous wooden walkway would not exist. However, this plan would have been very tight on time in order to get the greenhouse up and running to grow starts for Spring. There were also many questions raised by the second plan, such as whether chemicals from pressure treated wood might seep into the soil. This plan also requires more maintenance than the other plan. Thus it was decided to go with the second plan. However, it was pointed out that gravel is not ADA accessible so that part was replaced with wood chips. The wood chips have the added benefit of being more wheelchair friendly, although not ideal, as well as adding heat to the greenhouse and nutrients to the soil from decomposition. The plan was also changed to add in some layers of wood chips in between soil layers and to place gypsum to allow water to penetrate the clay that lies under the top soil.

The first step in construction was to tear out the old floor. Then the gravel layer that made up the ground was removed and dumped near the compost bin for later use. Several inches of clay were dug up and deposited near the compost bin as well for use in the green building class layer that semester. Once the site was ready for infilling, soil was acquired from Wes Green Landscaping and the wood chips were acquired from Professional Tree Services. The gypsum was already available at CCAT. The first layer to go on top of the clay was comprised of wood chips and gypsum. For the next approximately 4 inches there were alternating layers of mulch and soil that covered the whole floor area. Then, the center that would become the pathway was filled only with wood chips and the sides for planting were filled only with soil for the remainder of the volume that needed filling.

After the new floor was completed, the area was quickly filled with plants. The entire Southern wall was planted with various crops such as kale, tomatoes, lettuce, and more. Two of the tables which were in the greenhouse before were put back in along the North wall in order to have a space to grow seed starts and to propagate plants. To maximize our ability to do these activities, 3 shelves where installed on some the window panes along the North wall. The tables also provide a good place for storage and there's still room on either side to plant something in the ground.

The operations and maintenance page may be found at CCAT greenhouse/OM.