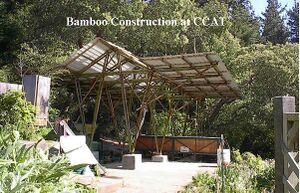 The Campus Center for Appropriate Technology, needed a way to shelter its vermiculture bins and Biodiesel refinery--but not just any building would do; the co-directors were looking for construction materials that would be in line with their mission to value a healthy planet and to demonstrate living lightly. Alec Cooley, waste reduction manager for Humbolt State University, originally planned to build the shed from Douglas fir, but Derek Toups (a previous CCAT co-director) introduced him to bamboo as a more appropriate building material

Bamboo is more sustainable than conventional timber. The supply can be maintained without any residual damage; in fact, harvesting at the right time actually helps the plant to grow more quickly in the future.For every crop of timber, a plot of bamboo can be harvested 17 times. The small (15 by 90ft) grove behind the structure, once it has established itself, will produce enough bamboo to replace the entire structure once every year. Since bamboo lasts about 30 to 40 yrs, CCAT will be able to provide bamboo for other alternative construction projects. Some structures in Japan have lasted much longer--almost four hundred years! Finally, bamboo grows well in many temperate climates; this makes it appropriate for cultivation in much of the U.S.

Design of the Structure[edit | edit source]

Construction with bamboo is different than building with conventional timber. Its long fibers give it twice the compressive strength of concrete, and the same tension strength as steel. It has greater shear strength than many structural woods, but it is too flexible to take up bending forces. For this reason, each truss is built to put only tension or compression forces in the bamboo. The secret to Bamboo's strength is its internal shape. It is made of internodes, which are hollow cylinders, and nodes, which interupt the internodes about every foot or so with a wooden "plug". 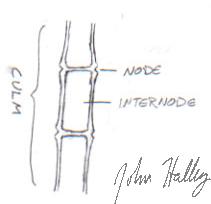 CCAT's bamboo structure is large, with 600 square feet of roof area, and fairly lightweight. This caused some of the builders to think that the structure might act as a giant kite; in order to keep it secure, they anchored the building in place with six 3000-pound concrete blocks. 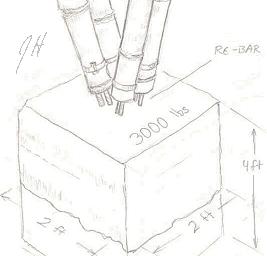 Little equipment is needed to build with bamboo, only simple tools. The manner of joining stalks is simple and secure. Wherever two pieces of bamboo connect, holes are drilled in the internode portion of the stalks. A bolt is pushed through both pieces, and the internodes are filled with mortar. The mortar distributes the load of the bolt through the whole piece of bamboo and prevents it from splitting.

Steel bolts through mortar in internodes

The round forms of bamboo are visually appealing; it has a different and more calming effect than the rectanglular shapes we are used to seeing. Each stalk changes diameter from one end to the other, and the shape of the nodes and internodes lend interest. The whole structure has a pleasant, organic appearance; indeed, the only conventional timber in the structure, 2x4 beams which anchor the roof panels in place, seems jarring and out of place.

The thickest stalks are used as pillars, anchoring the structure in place; medium-thickness culms are used for cross-bracing and strengthening. The thinnest stalks branch outward to support the roof. All poles taper toward the ends; the overall effect is one of grace and of appropriate sizes used in the right places. 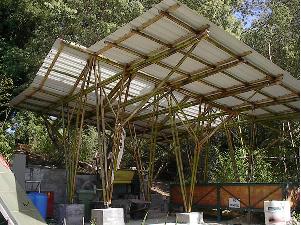 Photos and all drawings created by John Halley
Email comments to jjh31@humboldt.edu