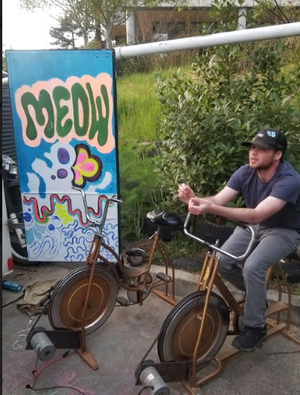 The MEOW, the powerhouse of CCAT is in disrepair. Years of not being used properly have caused the batteries to die without a chance of revival. Follow the Seismic Strategies teams journey on bringing back the MEOW into the community.

The history of the MEOW in CCAT is extensive and somewhat a mystery. The story of the MEOW begins in 2003. The most quintessential part of CCAT from its history is pedal power bikes. You can look at pictures of CCAT decades ago and find hundreds of students pedaling bikes for power. In 2003, Ben Scurfield and others banded together to create the communal power idea of putting wheels making it the MEOW. The MEOW has used to power the concerts, Maydays, speeches, and other events. Until 2010, the MEOW was being used at a Danco construction site and was stolen. All that was left was just the trailer frame itself. In 2012 thanks to students David Katz and Solar Roger, the MEOW was brought back to life with an entirely new system. Although, once again, now 2019 the MEOW has fallen into disrepair and is no longer used to power the heartbeat of CCAT. Karina Coronado, Bryce Baker, Colton Evans, and Cassidy Fosdick took on this project in fixing the MEOW.

Upon receiving the MEOW as a project we found out from Anh Bui that the MEOW has not reliably worked in months. The following are the issues that Anh presented: does not work after the morning or at night, the MEOW is not holding a charge, they think that possibly the inverter is not working, and only 2 out of the 4 bikes are in working order. Our objective and priority for this project are to get the MEOW working and functioning. Also, bringing the MEOW back into the community will be important and a goal for our group to accomplish.

The following criteria will be used by our team to follow in order to ensure that we meet our goals for our client and remind us what is most important to them to ensure that we achieve a successful project. The criteria below are based upon the client's stern direction and requests for their idea of what they want for the MEOW. The scale (1-10) represents the importance level of meeting the constraint of each listed criteria, 1 being the least important and 10 being the most important.

The Basics of a PV System[edit | edit source]

A photovoltaic system is relatively simple. All it requires is a little know-how and ability to build the system. The necessities of PV systems are the following: solar panels, a battery(or batteries), solar energy. Although, to make the system more efficient additional technology should be added such as a charge controller an inverter, and a surge protector. The MEOW has 4 solar panels aligned in series to increase voltage. The solar panels energy that gets produced is then connected to batteries in series where the energy can either be stored or connected to the inverter. The inverters purpose is to alter the current from DC to AC which is used in most households. A charge controller is used for the MEOW's system to prevent overloading the batteries with a charge or allowing the batteries to be drained too quickly.[1]

The Benefits of Solar[edit | edit source]

One of the solutions to the energy issue is solar energy. Solar energy provides many benefits not only for the environment but also medically. For example, in Ohio, a 1-kW panel provides 105$ in health benefits just because it displaces enough greenhouse gas emissions it saves people money from having to go to the doctor. In states where coal is the main energy source which causes a large assortment of illnesses; this technology could potentially be life-saving. The Air Pollution Emission Experiments and Policy (APEEP) values that GHG's cause about 6 million dollars worth of mortality.[2]

Not only does solar power make sense for a person medically but also is great for the wallet. The sun's energy luckily for everyone is free. However, the equipment needed to harvest and use that its energy is not. Usually, when thinking about buying a solar system some terms that come to mind are- expensive and unaffordable. There are some calculations you should consider before purchasing the system such as the life cycle costs, life cycle savings, payback time, and return on investing. In order to decide if a PV system is right for your household, you should perform these calculations and make the decision best for you.[3]

One of the most difficult parts of the MEOW is the understanding what it is and how it works. It took our group about a month of intense research and networking with community members to figure out how the MEOW works and what could be the source of the issues. The current system's batteries are 12 Volts (V) each and after testing them with a multimeter we discovered that two of the 4 batteries were at 8V. We spoke to Scott Toyama of Schatz Energy Resource Center and he confirmed that these two batteries are dead and need to be replaced. Two other components our group thought might be causing the MEOW to not work are the charge controller and the inverter. Our group had solar Roger come to the MEOW and assess these two components. After some testing, by looking at the controls of charge controller there were no issues found with it. Furthermore, Roger stated that the inverter was not putting out an AC current because there was not enough DC charge to pull from the batteries. The inverter does work when there is enough charge, but stops pulling out charge to avoid damaging the batteries.

What Caused the issue[edit | edit source]

As I wrote earlier some of the history of the MEOW is a mystery. There's a loss between the MEOW V2 to the version of the MEOW we have now. In MEOW V2 there were Trojan batteries instead of Interstate batteries that we have presently and there is no documentation of the switch and this has led us to believe that someone had done work on the MEOW without letting many people know. Whoever had done the work is likely the source for why the batteries are damaged. There is an AC bypass switch and the inverter switch and both of these cannot be on at the same time because it would create an endless loop cycle that would constantly pull charge out of the batteries. This occurs because even after the inverter stopped working the AC bypass switch would be pulling out the DC current causing the system to over discharge. There typically is a cover over these switches but was lost at some point once again most likely when the unknown update occurred. Although, this can be mitigated with proper signage and an easily accessible O&M.

In this section, we will be visually going over the construction of the project. This will include some of the design stage, the prototypes that were created and thought of, and assembling/ constructing the components for the MEOW.

One important criteria for the MEOW is to bring it back into the community. Although, the MEOW is dark and after speaking to students we found that people are scared to even go inside the MEOW.To change this we decided to paint the inside. Our group worked with some HSU art students and developed a painting event in the MEOW on May day to get it done.

To improve the functionality of the MEOW our group decided to add on a third bike to the system to add more power. First, our group acquired a washing machine generator. To attach this to the bike we had to weld on a rectangular metal tube onto the bike and then weld on a large rectangular metal bracket with a bolt for the generator to be placed on.

This is a proposed budget for our group. The items listed, excluding the painting materials, were recommended as necessary in order to make the MEOW functioning by professionals in the community such as solar Roger, Lonny Grafman, and Scott Toyama.

To supplement the budget we had available to us. One of the teammates, Cassidy, applied for a grant through IRA in order to purchase the needed supplies for the MEOW.

Due to timing issues and lack of sunshine we were unable to test the new components we added to the MEOW. One of the batteries we ordered was broken when we opened the box. Additionally, after we installed 3 out of the 4 batteries in series they were drained and could not be charged due to no sun.

There is a racking system we purchased was smaller than the size of the panels. However, it is definitely more than possible to make the racking system work for the MEOW. Our group did not have the time it would take to build the racking system. Our group was cut short on time because it took a while to receive funding and also by the time the racks got shipped to us there were only a couple weeks left in the semester. Our basic design to attach the racks is to attach them to the brackets on top of the MEOW and set up a car jack to lift or lower the racks by hand.

Additionally, there are three currently working bicycles that are wired together. The bike that has a frame similar to the fourth bike has a diode installed that has not been tested to ensure its viability. The fourth bike which we worked on all semester has a generator attached to a belt and also has an untested diode. This fourth bike is in need of a rail system on the larger wheel that is attached to the belt/ generator. Thus, the bike with a rubber wheel is still in need of a guide to ensure the belt does not slide off the large wheel.

Due to the MEOW's high learning curve, our group recommends for the next students that take on the MEOW to immediately reach out to community members and to do research in order to fully understand the MEOW and make the rest of the project easier. Additionally, it's important that everything gets properly sized when purchasing items. For both the racking system and batteries were not the right size and made the project more difficult. For example, we had to build an entirely new battery enclosure to put the batteries we ordered in.

As of today MEOW was last known to be used for CCAT's Mayday in 2019 and it was a success. Some of its most recent updates include new batteries, a new battery enclosure, an extra bike for producing more energy, and a fresh new coat of paint. Although MEOW sits in the driveway there is still some components that work. The rig itself stopped properly functioning some time in June, but it's thought to just be a problem with one of the batteries. It's currently undergoing aesthetic modifications, with a mural on the inside of the trailer, and one planned for the outside.

Page data
Retrieved from "https://www.appropedia.org/w/index.php?title=CCAT_MEOW_2019&oldid=650182"
Cookies help us deliver our services. By using our services, you agree to our use of cookies.
Categories:
About Appropedia · Policies · Contact · Content is available under CC-BY-SA-4.0 unless otherwise noted.