From Appropedia
BUTCHERING A BEEF

WITH FARRELL BURNS AND ALLEN SHARP

With the coming of fall, Ozarkians prepared for the colder months ahead. When the weather was cold enough to keep the meat from spoiling quickly, farmers butchered for their yearly supply of meat.

Before refrigeration was used, farmers usually butchered pork because it could be cured. Beef was a welcome change from the diet of cured pork, but it had to be used quickly. Many families shared the beef so that it could all be used before it spoiled. When pressure cookers came into use, some women canned the beef, but this was very time consuming and most families liked the fresh beef and cured pork better than the canned beef, anyway. Today, thanks to refrigeration, meat can be frozen and stored for use anytime.

Farrell Burns first learned how to butcher as a young boy, working for his father who was a butcher. When he first butchered, he had only hand tools to use. Today for his home butchering, he uses trucks and power machines to make the lifting easier but the actual dressing the animal is the same.

The actual butchering is relatively simple. It takes a short amount of time to butcher beef. Though it took Farrell about an hour and a half, because he went slowly so we could get photographs of the different steps, he usually does it quicker than this.

Butchering also takes very few utensils which most farmers have. First you must have a few well-sharpened knives. You should have a large knife for slitting the throat and cutting the beef open. Next, you need one smaller knife for each person helping to skin the beef. You also need a device to hang the beef up--a rope and pulley around a tree limb, or anything on which to suspend the beef and hold it during the butchering process. It is also helpful to have a single tree, a wooden bar with hooks on each end, to fasten the beef to when hanging it up, for the calf must have both legs secured to do the skinning and cutting effectively.

Other items needed for butchering are a beef saw to saw through the bones, an ax to split the head open, and several buckets of water to clean the organs that you wish to keep, such as the liver and heart. You may also need a tub or other large container to catch the entrails in.

After shooting the animal through the head, quickly bleed it. It is important to bleed the beef as soon as possible, since quick and thorough bleeding results in better tasting meat. To bleed the calf, with a butcher knife, slit the throat horizontally (photo 1) until a constant blood flow begins. Allow the blood to drain thoroughly. 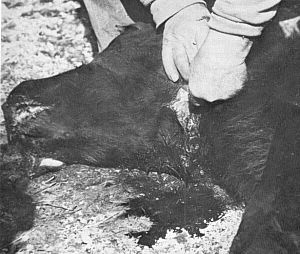 Photo 1--Cutting the throat to bleed the calf.

Next you should skin the back legs. Make a long cut just through the hide just past the knee. Then with the knife, peel the hide from the flesh by cutting the hide away. Now cut off the back legs in order to hang the beef up. To do this slice through the flesh to the bone just below the knee and then saw through the bone (photo 2). Expose the leaders so you can insert the hooks to hang the beef up. Fasten the hooks of the single tree through the leaders on each leg (photo 3). Then in some manner suspend the animal in the air. If you are using a rope to hang the beef, attach the rope to a pulley that is hanging on a tree limb high enough to completely suspend the animal, and pull the rope to raise and lower the beef by using a truck or tractor. Before cars and trucks were in use, farmers used a horse to raise and lower the beef. 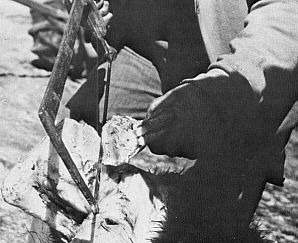 Photo 2--Sawing the back hooves off. 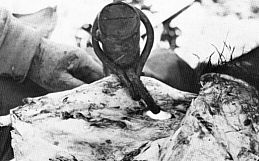 Photo 3--Attach the beef to the single tree through the leaders in the leg.

The next step in butchering is the skinning. To begin cut the hide away from the flesh starting at the back legs (photo 4). As you cut, fold down the skin and continue separating the hide from the flesh down the head (photos 5 and 6). Don't try to skin just one side at a time. Skinning around the animal evenly keeps the hide from tearing and prevents cutting into the flesh. When you get to the tail, cut it off at the base near the flesh with a knife. The tail should be separate from the hide and the flesh. When skinning where the legs join the body, be careful not to cut into the flesh, for that is easy to do when working on these parts because of the cavities in the body. To skin the front legs, slit the hide down the leg and then separate the skin from around the leg by cutting it away from the flesh with a knife (photos 7 and 8). Trim the hide from the legs and let it fall so that it will be out of the way. With the hide completely off the legs, saw them right below the knee, horizontally; completely through the bone and flesh as you did for the hind legs (photo 9). 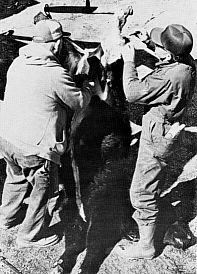 Photo 4--Farrell Burns and Allen Sharp begin to skin the beef starting with the legs. 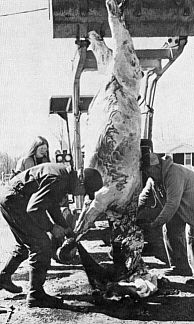 Photo 5--To skin the beef, cut away the hide from the flesh. 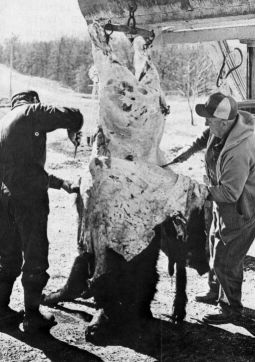 Photo 6--Allen and Farrell skin the back and underside. 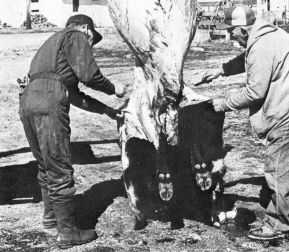 Photos 7 and 8--To skin the front legs, first slit the hide down the leg and peel the hide off the leg with a knife.

Photo 9--Farrell saws the front legs off at the knee. 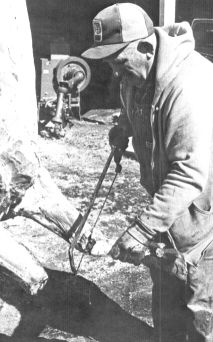 When the hide has been removed down to the neck you should cut off the head. First, fold down all the hide over the head so that it will be out of your way. Cut the head at the neck just above the ears. To do this, slice through the flesh to the bone all the way around with a large butcher knife. Using the beef saw, saw through the neck bone (photo 10). When you cut the head off, the hide will be completely off. 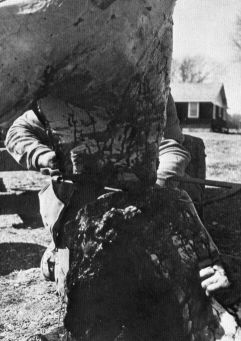 Photo 10--Sawing through the neck bone to get the head off.

To gut the beef, slice with a knife vertically the entire length of the underside all the way to the neck, cutting just through the skin and flesh (photo 11). Be careful not to cut open the intestines or any other organ while slicing the beef open. When you get down to the breast plate, you may have to use a saw to cut through it. 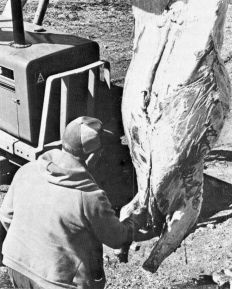 When the calf is cut completely open, the entrails can come out. Gently apply pressure to the entrails starting at the top and pull them from the inside cavity of the beef until they come out (photo 12) Then lightly push them down toward the wash tub or container to catch them. Be extremely careful not to break open any organ, because a puncture will make the gutting very messy. There are four chambers to the calf's stomach. Be extra careful not to break them, because partially digested food and stored matter are in the stomach chambers. As you pull out the intestines, separate the liver (photo 13). The lungs and heart (photo 14) will come out next. Put liver and heart in water to clean them. 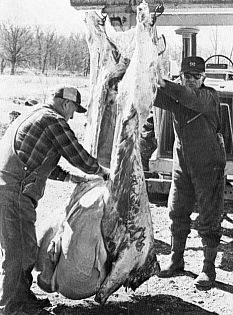 Photo 12-Pushing the entrails out. 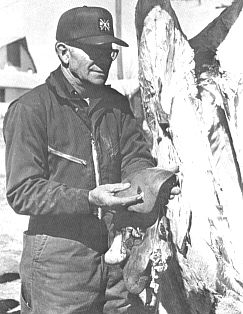 The kidneys remain in the cavity fastened to the flesh after the other entrails are removed. Cut them out close to the flesh. 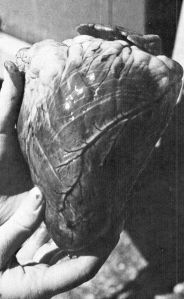 The beef is now completely gutted and ready to be cut. You must first cut it in half. To do this, begin at the top, between the back legs and saw straight down the middle through the pelvic bone (photo 15), and continue sawing down the back vertically the length of the beef (photos 16 and 17). 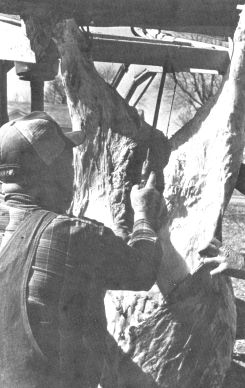 Photo 15--Sawing through the pelvic bone.

Photo 16--After sawing through the pelvic bone, continue to saw down the whole beef vertically. 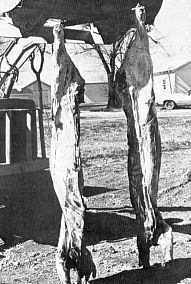 Photo 17--The two halves of beef ready to quarter and cut into separate parts.

The meat is usually quartered to make it easier to handle. To quarter it, saw between the ribs horizontally, completely through the side. The meat should be quartered between the second and third ribs, leaving two ribs on the top quarter and the rest of the ribs on the bottom quarter (photo 18). The two quarters left hanging on the single tree should be equally balanced. If they are, then the beef was butchered and quartered correctly. After aging three days it may be cut into separate cuts. 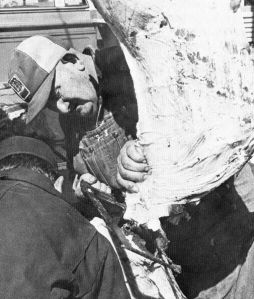 Photo 18--To quarter the beef, saw between the second and third ribs.

To remove the brains, split open the head from the eyes to the nose with an ax. Chop through the hide and all the way through the skull. Then reach in and pull out the brains.

The entrails and hide should be disposed of as soon as possible so they won't smell and attract flies.

Farrell said, "You lose about forty percent of the calf when you butcher it, not counting the internal parts like the brains, liver and heart. Some people also use the kidneys. When you butcher yourself, you get better tasting meat. I could have sold that calf at the market for a good sum of money or had someone butcher it for me, but it's better to have your own fresh beef." 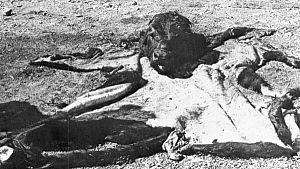 The hide should be removed all in one piece.