From Appropedia
Redirected from Cattle 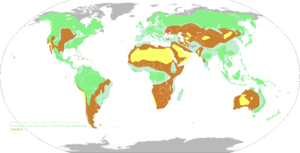 World map indicating the grasslands. These can be used as food to grow animals.

Animal husbandry is a form of agriculture in which livestock is bred and raised. The livestock is then eaten, or for example in cows and chickens, used for milk or eggs. Sometimes additional products can be attained such as leather, and the animal can also be used as a draft animal or used for transport. Although animal husbandry has several negative effects (see below), some areas naturally have (or had) open grasslands and are are not the native region of specific (plant-based) protein-foods (ie tofu, ...). Due to this, in these circumstances, growing animals may be appropriate. It however should be used only as a last resort.

In the map on the right, you can notice the appropriate locations were this can be done. The animals should be fed only with grass, the growing of other crops (ie maize, soy, grain, ...) would make the approach unappropriate and highly inefficient (these other -imported- crops would then be best eaten by the person itself). Note that one of the main reasons why the growing of animals can be appropriate in some situations at all is simply due to the presence of protein in the meat, calories can often be attained from other plants that can be grown in the region.

The other map on the right shows native animal species that (in some cases) can be used per region.

Note that cattle farms are always very labour intensive, as they generally feed with grain, ... (not grass). That is however if you include the work for the growing the feed.[verification needed]

Although due to the increased use of machinery (ie harvesters), a lot less people are required to grow grain, grain still requires a lot of processing (cutting, beating/dehusking, may require pesticide use, water, ... ) So it is nevertheless very energy intensive, labour intensive (though not human labour intensive) Regardless, what I mostly mean is that a additional crop is often grown to feed the animal at all, and this should be prevented. If the animal is only fed with grass (which is a crop humans can't digest), the issue is completely eliminated.

Note that besides allowing the animals to graze on the grasslands, it may also be appropriate to grow (and/or store) native grasses, herbaceous plants, legumes to feed the animal ie in certain periods of the year. See http://en.wikipedia.org/wiki/Hay

The animal needs to be slaughtered and processed in such a way that most of the animal can be used. There is always a degree of waste (unusable animal parts), and not all animal parts are as healthy/tasty. See Butchering a Beef (Bittersweet, Volume VII, No. 1, Fall 1979)

Page data
Retrieved from "https://www.appropedia.org/w/index.php?title=Animal_husbandry&oldid=599608"
Cookies help us deliver our services. By using our services, you agree to our use of cookies.
Categories:
Maintenance categories:
About Appropedia · Policies · Contact · Content is available under CC-BY-SA-4.0 unless otherwise noted.