From Appropedia
Redirected from Plant breeding

Selective breeding is the technique of changing the genetics of plants or animals in order to produce desired characteristics. [1] Organisms that are selectively bred are sometimes also called "domesticated species".

Selective breeding can be done by simply propogating a plant/animal using seed and selecting the organisms which have the most desirable charisteristics. This process is repeated over and over untill a organism (then called cultivar) is finally created which has all the charisteristics the breeder desires.

Crossbreeding can only be done with species that are similar enough to be able to reproduce with each other. An example could be breeding one tomato with another tomato, or a cow with another cow.

Seed is made after a pollination in which pollen from a male flower has fallen on the pistil of a female flower. As the characteristics of the two plants blend together, a large difference between the different descendants will occur. Through selection, the majority of the plants with differentiating characteristics can be removed so that seedlings are kept that are equal in all respects. Most vegetables, herbs and one and two year-flowers are made after years of selection, until a high degree of uniformity is reached. It is then said that the properties are "set", or "fixed". Non-selectively bred species will have a wide variety in charisteristics for their descendants after sowing.

With plants, these "perfected organisms" are then usually propogated using a asexual manner (ie using cuttings, ...). This, in order to maintain a completely identical organism.

Another method is using genetic modification. This method is speedier and the technique allows much more precise modification of the plants (resulting in stronger and more resistant plants).

Self-pollinating crops These are sometimes propogated by open pollination. The offspring differ very little. These crops are "fixed". Examples are the common bean and the tomato. These plants are homozygous.

Cross-pollinating crops These are not propagated by open pollination because the offspring then differ too much. The reason is that the plants are heterozygous.

F1-hybrids: Hybrids are bastards. They are made to get a batch of plants that are (almost) identical to each other. We start from 2 selectively-bred or fixed species or varieties. These are obtained by forced self-pollination and the descendants are also repeatedly propagated by a forced self-pollination. This process is called inbreeding. A number of homozygous plants made that are called inbred bloodlines. With these inbred bloodlines, the charisteristics are fixed. Many cross-pollinators do not tolerate self-pollination and show inbreeding depression. They will begin to exhibit defections and become less vigorous in growth. However, such inbred bloodlines are used to create F1 hybrids. Two inbred bloodlines are then crossed with each other. The descendants all exhibit the same characteristics and become strengthened by the heterosiseffect. They are usually stronger, bigger and nicer than the parents. Given that the characteristics of these hybrids are thus no longer fixed, the crossing of F1-hybrids will result in the reintroduction of the charisteristics of both parents and the descendants will no longer be as uniform. Certain desired characteristics will also be lost. The parent lines of self-pollinators are maintained by generative propagation, the parent lines of cross-pollinaters are maintained by vegetative propagation. 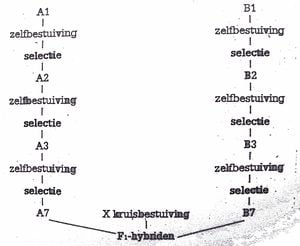 A7 X B7 is a cross pollination; which is also the final step

Selective breeding can have benefits but may also result in disadvantages if done incorrectly. For example, the Green Revolution has resulted in higher yielding crops which are however also less resistant to diseases/pests (due to the hastened and more intensive growth) and also require additional fertilisers (the latter isn't a huge problem and natural fertilisation can be used, yet needs to be timed better -earlier- than chemical fertilisation). Note that cultivars of crops often exist for both organic farming and "traditional" farming. The first type are often better (more disease-resistant), yet still feature intense fruiting.

Page data
Retrieved from "https://www.appropedia.org/w/index.php?title=Selective_breeding&oldid=625335"
Cookies help us deliver our services. By using our services, you agree to our use of cookies.
Category:
Maintenance categories:
About Appropedia · Policies · Contact · Content is available under CC-BY-SA-4.0 unless otherwise noted.