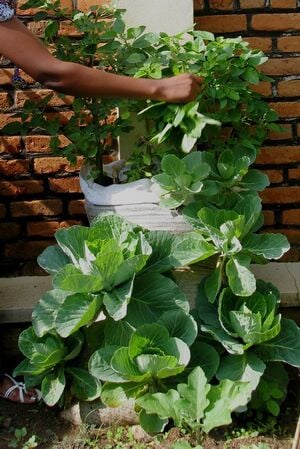 Figure 1: An example of a bag garden.
Location data

Bag/Sack gardens, also known as "vertical farms or gardens", are tall sacks filled with soil from which plant life grows. This concept for a small, portable garden is good for areas where the gardener may have to continually relocate, as well as for areas where there is little or no healthy soil (as the soil in the bag is contained). Due to their vertical nature, sack gardens are also fairly efficient in terms of using water.

Most of the initiatives and projects concerning sack gardens have been or are being conducted in the slums of Nairobi, Kenya, where the lack of appropriate farm land combined with the very low incomes and employment rates of families and individuals, as well as natural disasters such as landslides, result in very poor food security.

Several initiatives aimed at providing and training in the use of these sack gardens have reported high levels of success in terms of improving nutrition, food security, and income.

One has to note that sack gardens, although suitable for areas with traditional gardening challenges, can hardly compete with conventional kitchen gardens when they are feasible.

The term "sack garden" is sometimes also used to describe horizontal bag gardens, which are simply bags laid on one side with their other side cut open, so that the bag functions like a pot or trough.

The main advantages of sack gardens are their portability, low size, low cost, efficiency, productivity, and contributions to food security. These traits make them ideal in situations such as:

How to make a bag garden[edit | edit source] 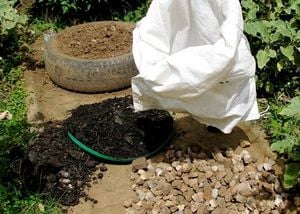 Although not necessary, a can or tin with no bottom and top is a helpful tool for assembling bag gardens. This guide will include the use of a hollow can to demonstrate its usefulness.

The total cost of the described bag garden, assuming the bag was discarded from a food aid sack, the fertilizer was collected from local wildlife or population refuse, is the initial price of the seeds or seedlings (from which further seeds and seedlings can then be grown) and the continual price of the necessary water.
2 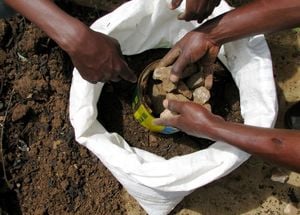 Fill the bottom of the bag or sack with soil. Place the hollow can in the middle of the soil and then fill it with rocks – this is used as the watering system for the bag garden. Water is poured over the rocks and it slowly filters through the stones, gradually watering the vegetables without flooding them.
3 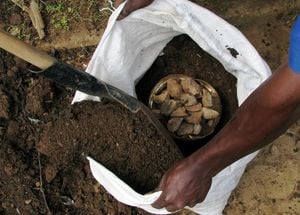 Fill the area around the can with soil up to about the top lip of the can. The can should now be pulled up, letting the stones fall out of the bottom so that the stones are in the middle of the dirt. Keep the can on top of the rock center and refill it again.
4 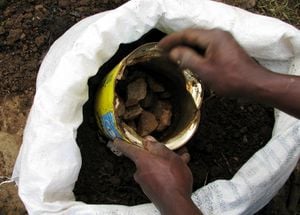 Repeat step 3 until the bag has been filled. The bag should now contain an uninterrupted core of rocks surrounded by earth all the way to the top.
5 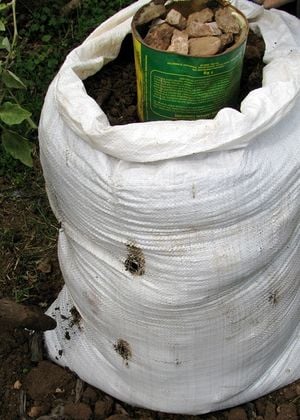 Make a number of holes in the side of the bag at an even distance apart. These holes are where most if not all of the seedlings are going to be transplanted to.
6 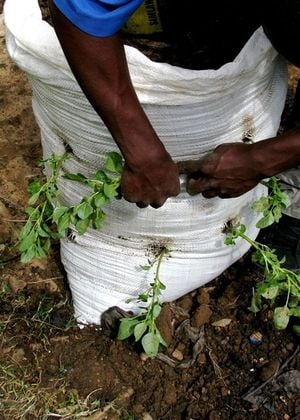 Transplant seedlings into the holes on the sides.
7 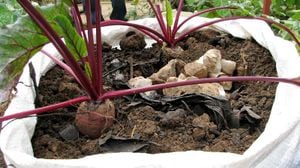 Plant on the Top.

Either plant seeds or transplant more seedlings into the open top of the bag. Since this is the only horizontal surface for growth on the bag, consider using the top for tubers.
8 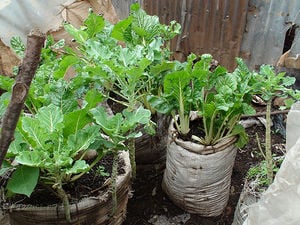 Maintain, water, care for, and harvest; as necessary. Always water from above to utilize the rock irrigation channel.
9

Video from Uganda about making a Bag garden (intended for UK school use.)

The French relief and reconstruction NGO Solidarites implemented a small scale agriculture pilot project in Kiambu and Kibera, two slums in Nairobi, Kenya. This project was funded by the French government involved planting vegetable seedlings in earth filled sacks placed on rooftops or doorsteps. Families were given one to three sacks filled with earth, and by the end of the pilot project 6000 families were producing tomatoes, onions, kales or spinach. A nursery was established in the slum to supply the initial necessary seedlings while a group was assembled to train the project's beneficiaries in the upkeep and assembly of sack gardens. Each supplied sack had a volume of 1 m3 and represented a farmable surface area of 5 m2. One of these sacks is able contain 50 seedlings of kales or spinach and 20 tomatoes plants. Vegetables are used directly and indirectly by the household to obtain food, access cash when needed, and educate children. On average, it was estimated that each household increased its weekly income by 5USD, a significant figure given the fact that in Kibera the rent of a house cost around 6USD a month.

In India, children attending government schools are provided with food as specified by Government regulations. That is, there is a provision of lunch free of cost to school-children on all working days with the key objectives of protecting children from classroom hunger, increasing school enrolment and attendance, improved socialisation among children belonging to all castes, addressing malnutrition, and social empowerment through provision of employment to women.[3] To meet this regulation, some schools have initiated vegetable production on their premises to add fresh vegetables to their mid day food. This helps add essential nutrients and vitamins to the food that is provided to the children. As there is little or no land available on many school premises, the sack garden technique is being investigated.

Under FNPP programme (FAO-Netherlands Partnership Programme), the sack garden initiative was tested in Gaza for almost six months with tomatoes, lettuce, green pepper, spinach, cabbage, beets, parsley, turnip, onion, etc. The experiment was conducted through the FNPP office, and the rate of adoption was remarkable, particularly in the Northern Districts where drought and chronic malnutrition are a fact. The main conclusions from the initiative were that:

1) High and good quality production extended beyond the normal production season. 2) The incidence of plagues and weeds are almost none. 3) Less time was spent on different agricultural tasks (less upkeep required when compared to traditional gardening). 4) The water efficiency is quite impressive. 5) The overall production is very good. A general opinion was formed that about 10 bags might be enough to feed a family.

CL4 has organized sack gardens for households with family members ill with HIV/AIDS.

The Multi-storey gardens initiative was implemented to address the challenges created by the encampment policy for refugees in Kenya, which did not allow agricultural activities outside the camp. With limited space inside the camp, a scarcity of water, security concerns for women moving outside the camp, and the limitation of the WFP food basket with regard to fresh and micronutrient-rich food, sack gardens appeared a possible step towards improving conditions. Several thousand refugees participated in this programme.

ACF-USA promoted micro gardening in small bed-, tyre-, and sack- form in the IDP camps in Northern Uganda due to problems with access to land caused by insecurity around the IDP camps. The production significantly contributes to the households' food supply and consumption, as well as to the households' income through sale in the IDP camps. The results of the programme show, that even in a small space there is a big potential for vegetable production, and therefore an enhancement of the dietary diversity and influence on the nutritional status of the population. These findings have helped promote micro gardening as a component of an integrated nutrition, water, and food security project in the North of Uganda.

Although sack gardens have enjoyed much success and have improved the situations of many individuals and families, there is little documentation on the actual consumption versus yields of the gardens, or on what the total socio-economic impacts of sack garden initiatives are. In order to better understand, argue in favour for, and improve the sack garden technique, further research is required.

Several initiatives to further develop the technique include: