Animals for transport are animals specifically used for the transportation of people and/or cargo. Although they have been in frequent use in the past, they have now been replaced by motorized vehicles or bicycles in most areas, but are still appropriate in some specific contexts, such as:

Species include wild horse, wild donkey[verification needed], camel, and reindeer, as well as draft horse breeds, small horse breeds and donkeys. Oxen and draft horses have traditionally been used for pulling loads. Note that dogs too were used to pull people on snow sleds, but can not be used appropriatelly as it's not a main species (ancestor:gray wolf), and also principally consume meat (hence making them unsuitable for use on grasslands).

The temperaments of the animals vary widely. Jared Diamond's 1997 book Guns, Germs and SteelW describes how the animals of some regions were never successfully domesticated - for example the zebra is fierce and cannot be tamed as can its relative the domestic horse.

Animal riding and transporting cargo on the back[edit | edit source]

Some of these animals can be ridden. By using a saddle, a person can sit directly on the animal. This has advantages for certain contexts, particularly for travelling on rough terrain. It however also has the disadvantage that the animal needs to carry the full weight of the person, and thus needs to perform considerably more effort to transport the person.

Note that the animals can often also be used as pack animals (carrying cargo rather than a person on the back), see the "Working_animal" wikipedia article. This again is more suitable on rough terrain. 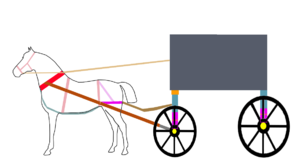 Coaches can be used to transport several passengers, and reduce the effort required by the animal

Carts (coaches, stagecoaches, ...) can be used to considerably reduce the effort needed to transport 1 (or several) persons by means of animal power. They have the disadvantage though that due to the use of wheels, the terrain needs to be flat (preferably paved). Another disadvantage is that the weight of the cart itself is of course also added, though the effort for the animal is still a lot lower since the weight actually rests on the ground, and the animal only has to pull it forward (rather than also supporting it). The cart used is best kept as lightweight as possible, while keeping them sturdy (ie by using metal, ...). Sulkies seem to be the lightest carts.

Several tacks exist to attach the animal to the cart. Ie the Dutch collar, bow yoke, and collar with hames and trace, see here The single yoke is used to only attach a single animal.

The range of a stagecoach (with presumably 4 horses) is about 110-190 km/day at a speed of 6,5 to 11 km/h. A lighter vehicle (with less people on board/cargo) would presumably be a lot faster.