What is the Printers for Peace Contest?[edit | edit source]

We are challenging the 3D printing community to design things that advance the cause of peace. This is an open-ended contest, but if you’d like some ideas, ask yourself what Mother Theresa, Martin Luther King, or Gandhi would make if they’d had access to 3D printing.

MOST RepRap 3D printer kit will go to the second prize winner who create designs that enable 3D printers to encourage peace. Michigan Tech’s MOST version of the RepRap Prusa Mendel open-source 3D printer kit can be built in a weekend. It has a 7.8–by-7.8-by-6.8-inch build volume on a heated bed, prints comfortably at 80 mm/sec ABS, 45 mm/sec PLA, HDPE and PVA with 0.1 mm resolution.

Michigan Tech has already saved tens of thousands of dollars using 3D printable scientific and engineering equipment. Our labs have developed 3D printable tools to test water quality, recycle waste plastic and found that 3D printing consumer goods is better for the environment than shipping them from China. The technological evolution of 3D printers, widespread Internet access, and inexpensive computing offer new opportunities for open design to enable peaceful and accelerate wealth creation for everyone.

Our goal is to facilitate an open exchange of 3-D designs of technologies that benefit humanity. 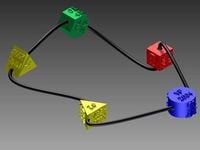 1st Prize went to John Van Tuyl from Hamilton, On who designed VaxBeads, which are 3-D printed immunization records. VaxBeads offer the potential to ease the determination of what vaccines a child needs in the developing world. Each bead represents a different vaccine. The shape and colour of each bead is unique to a specific vaccine.

This innovative idea showcased the ability of 3-D printing as each bead is customized on the spot with the child's initials, date of birth, and an identifying number. It is the designer's hopes that the beads would have more intrinsic value to the patients than standard vaccination cards. 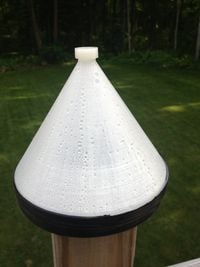 2nd prize (Michigan Tech’s MOST version of the RepRap Prusa Mendel open-source 3D printer kit) went to Michigan Tech student, Matt Courchaine, for his Solar Powered Water Purification Cone. In disaster areas or among the millions of people that do not have improved water supplies clean water is a precious commodity. This printable design allows users to make clean water from contaminated supplies. The white, semi-transparent plastic cover of the solar cone allows sunlight to pass through it and evaporate dirty water contained in the black base tray. Clean water then condenses on the cooler white plastic of the cone and drips into a holding reservoir, which is part of the cone for later drinking. 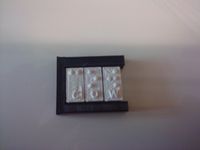 3rd prize was awarded to Aaron Meidinger for the design of a Braille Tablet, which is a tool for a sighted person to help a blind person to learn braille or just a quick way to leave a note for a friend. One print out a braille platform and a scrabble set of letters, along with some of the punctuation and a nice pile of blank tiles to use it to write any short message.

All the open-source entries to the contest demonstrated the technical ability and promise of low-cost 3-D printers to provide for humanities needs and advance the cause of peace.