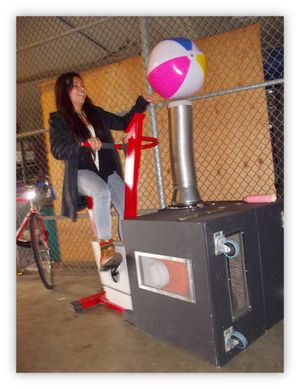 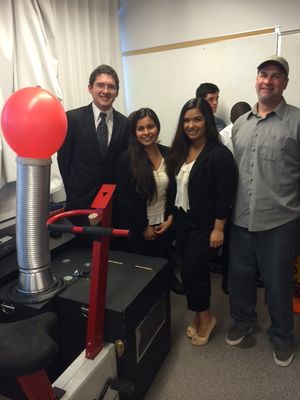 The purpose of this project is to create a bicycle powered fan where students in grades 6-8 at Zane Middle School can generate enough energy to levitate an object. The Fantastic Cycle team set out to make learning fun, and resulted with the device called Bernoulli's Bike Blower. Bernoulli's Bike Blower is an innovative way for the middle school students at Zane Middle School to learn a basic principle of physics. The Bike Blower is set up to generate enough energy to levitate objects in mid air demonstrating Bernoulli's principle. 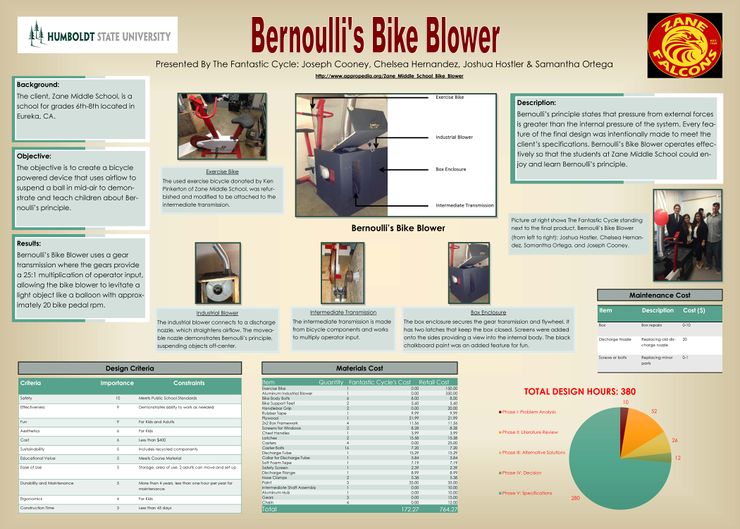 The objective is to create a bicycle powered device that uses airflow to suspend a ball mid-air in order to demonstrate and teach children about forces and energy. The following table shows the criteria and constraints:

Bernoulli's Bike Blower is an educational hands-on experience for kids to learn about Bernoulli's principle, which states that pressure from external forces is greater than the internal pressure of the system. By enhancing the pedaling of the bike, the device uses a six gear drive system that begins operation by generating power to the flywheel, which connects a chain to a two gear drive mounted on the platform where everything rests, which rotates an intermediate shaft assembly to another gear on the pulley attached to the fan blower. This system causes the fan to spin, thus creating airflow to the designated object.

The final design of Bernoulli's Bike Blower has a wooden box that encloses the fan blower for safety regulations, as well as a wooden box around the gear system. Both boxes include visuals of what's inside to give viewers an idea of how the internal system operates. Both boxes are also painted with black chalkboard paint for the students at Zane to enjoy. Once in use, the airflow generated by pedaling levitates objects provided by the user. The system works and meets the criteria depicted by our client, as well as the criteria laid out by the Fantastic Cycle.

The Materials and Cost needed to construct Bernoulli's Bike Blower:

Pie Chart of how many hours the Fantastic Cycle spent on Bernoulli's Bike Blower: 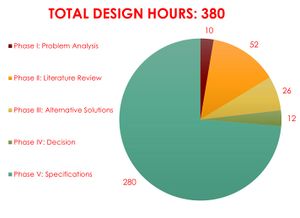 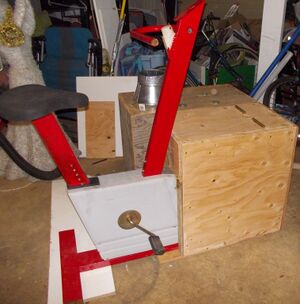 Caption
The two main components of recycled exercise bike and box-enclosed blower must be securely connected before use. The front feet on the metal frame of the bike fit into corresponding receptacles on the box to position the bike flywheel in line with the intermediate shaft gear. After the bike is in position, closing the gear drive cover door locks the bike into the blower box.
2 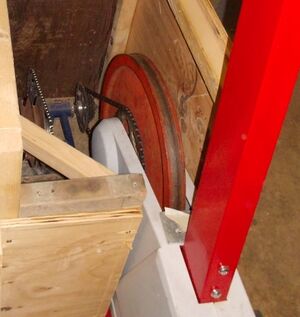 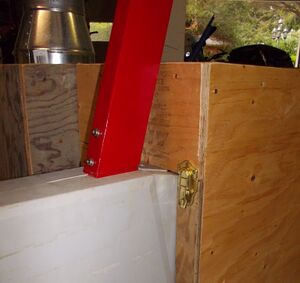 Caption
The drive components of Bernoulli's bicycle must be shielded for safety before operation. The blower box has an additional smaller box that covers the drive components and prevents accidental contact with the moving parts. This additional shielding is hinged for bike placement, after which the shield is closed and latched.
4 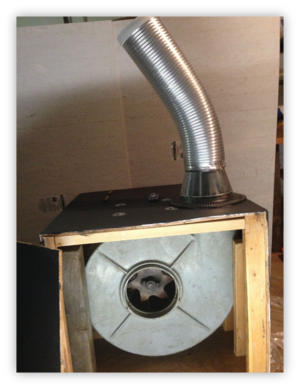 Caption
Powering Bernoulli's bicycle is similar to pedaling a bicycle, generation of airflow is accomplished by rotating the pedals of the exercise bike to power the blower. The bike and blower box must be on a firm, flat surface and securely attached to each other. When the bike frame feet are in position in the blower box receptacles, the bicycle will be stable and not require balance by the operator. The seat of Bernoulli's bicycle is adjustable for comfortable operation by riders of different heights and leg lengths. After adjusting seat height, the operator sits on the seat and pedals while holding securely to the handlebars. Greater airflow is achieved with faster pedal rotation. When a ball is placed above the discharge nozzle, it will be levitated relative to the amount of airflow. Articulating the discharge nozzle will cause the ball to float "off-center", seemingly defying gravity.

The original design employed a direct friction drive from the flywheel of the exercise bicycle to the pulley of the fan blower. At first there was not enough friction between the two wheels so a layer of rubber was added to the fan pulley to provide a better contact surface. This helped but the fan was still not providing enough airflow. It was also found to be difficult to maintain contact between the flywheel and the pulley. In an attempt to remove the pulley from the fan, so that it could be machined for better contact, part of the pulley broke, shown in the image below.

Plans for the future are to try discharge nozzles of different sizes to see how they affect airflow. Also for the future there are plans to experiment with objects other than spheres, such as a paper shapes, or a small kite. Last, equipping the bicycle with a speedometer will allow more identifiable input requirements for different objects.