A yurt is the traditional dwelling of Mongolia, and is known by the Mongolian people as a Ger (rhymes with "bear"). It resembles a round tent but is far hardier than your average REI model, designed to withstand the blustery winters of the Eurasian Steppes. Yet it is similar to a tent in that it accommodates the nomadic lifestyle of its progenitors by being easy to assemble and portable. The yurt is thought to have originated before the time of Ghengis Khan, and is still prefered today by indigenous Mongol populations, with entire yurt suburbs sprawling around large cities. The yurt is also gaining popularity in this country since it was imported as an alternative to "square" living in houses and apartments.

Traditionally, the Mongols are said to have built their yurts from willow saplings laced together by leather straps, with felt lined with pressed wool as the material for the walls and roof. Imported versions of yurts, such as the one on CCAT grounds, are constructed much differently than traditional yurts. Furthermore, the yurt on the grounds at CCAT was built as a permanent structure, and differs in design from both the traditional yurt, commercially-built yurts, and most other methods described by available sources. In this manual, we would like to discuss how to build a yurt in the manner suggested by most of our sources. This is because it can be built out of more appropriate materials such as hemp/organic cotton/used canvas and used wood products, if you choose. Also, it can be employed as a temporary shelter for camping or travelling, but could be maintained as a permanent dwelling if built to be durable and insulated.

The Components of a Yurt[edit | edit source]

A yurt is a freestanding structure, needing no outside support such as ropes or poles to keep it erect as long as its diameter is kept at a minimum. The design is simple, and the components include five structural elements, some of which are presented in figures below:

There are two additional pieces to the construction of the yurt, including canvas (and insulation) for the walls and rope to hold the walls up.

How to Build your Own Yurt[edit | edit source]

Instructions on building a yurt are rather lengthy and for the purposes of this handout, we are just going to briefly outline how it is done. We would like to suggest Blue Morning Star's book Tipis and Yurts as a definitive guide on how to build your own yurt, or you can check out the extensive web pages that members of the Society for Creative Anachronism have published regarding yurt construction for their historical role playing.

Yurt building is an appropriate technology because it can be accomplished from the ground up using all-natural, environmentally friendly, and possibly recycled or reused materials. The foundation can be made from brick or sandstone, the cracks filled in with adobe mud and sealed with linseed oil, and covered with throw rugs as carpeting. As previously mentioned, the walls of the yurt can be made from organic or hemp canvas, and insulated with any sort of natural insulating material. The wood for the structural elements of the yurt can be acquired from used lumber yards. Basically, it is a minimalistic structure that many people choose to build as a dwelling because they want to see if they can live without the "modern conveniences" that often have such a negative impact on the environment.

The yurt as a building design is not just appropriate due to its environmental friendliness. The place of its origins in Mongolia is one of extremes in climate, with strong winds, scortching summers, and freezing winters, yet Mongols have been living there happily in their yurts for centuries. Obviously, it is a very hardy structure. It is also inexpensive to build. Even an expensive commercially-built yurt will cost less than ten thousand dollars, and they can be built for even less by hand. 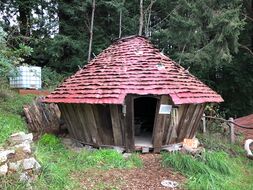 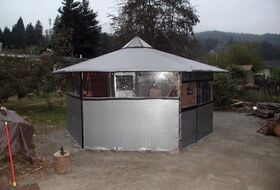 Sunny Brae Yurt
Page data
Retrieved from "https://www.appropedia.org/w/index.php?title=Yurts&oldid=655023"
Cookies help us deliver our services. By using our services, you agree to our use of cookies.
Categories:
About Appropedia · Policies · Contact · Content is available under CC-BY-SA-4.0 unless otherwise noted.