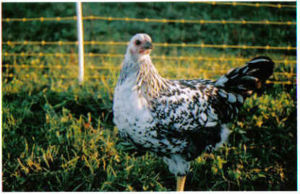 A chicken in a wild chick farm.

In the fall of 2005 Sarah Brunner and Shail Pec-Crouse, started a commercial pastured chicken operation in Arcata, California. The first four months see update of business were spent learning from other successful models, experimenting with different equipment, suffering through trials and tribulations, getting our hands bloody and planning improvements to our system. Throughout it all we have been guided by our core values of humane husbandry and sustainability.

We began with a very small flock of 175 birds and decided to try two different models of raising them on pasture to see which model worked the best for our situation. We compared the two models by looking at efficiency, loss to predators, land impact cost, fossil fuel use and mobility which strongly effects efficiency, land impact and fossil fuel use. After working with both models for a couple of months we came to the conclusion that the Chicken Tractor (CT) model is most appropriate for raising meat Chickens and the Hoop House (HH) model is more appropriate for raising laying hens. The CT is better for meat production because it is more cost effective and mobile and there is less predation. The CT is also important for pasturing laying hens for their first few months since there are less predator risks. The Hoop House is better for egg production because it accommodates nest boxes and roosts. 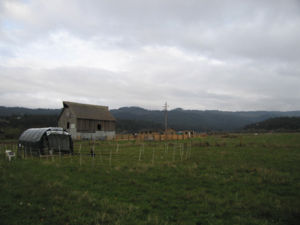 Joel Salatin developed a pastured chicken meat production using "chicken tractors" that are 10' x 12', fully enclosed on one end and covered with netting on the other end.

How our chicken tractor differed from the model:

The design after which we modeled our hoop house:

How our hoop house differed from the model: 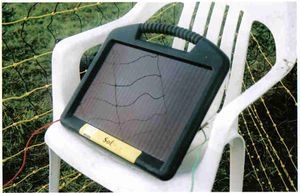 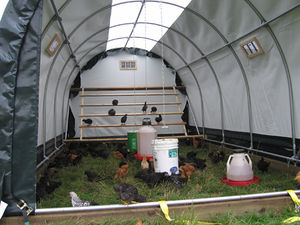 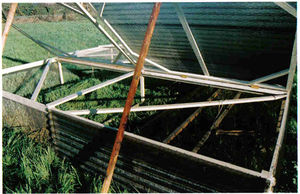 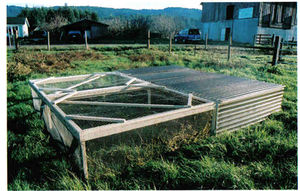 Comparison of Hoop House to the Chicken Tractor[edit | edit source]

Predators
We lost more birds in the Hoop House to predators than from the Chicken Tractor. We suspected that the culprit was a weasel finding its way through or beneath the electric fence, although one night of predation may have been due to not hooking up the electric fencing properly. During the day the lack of netting above the pastured chickens makes them vulnerable to hawks, especially when they are small.
Mobility
The HH is very difficult to move by hand. It is extremely heavy and takes two people pushing or a truck to move.
The CT was hard to move at first but has become much easier since using a custom dolly that helps it to pull along the ground. It is hard to move long distances though, which is problematic if it needs to be moved to a new pasture or close to an electric outlet for repairs.
Land impact
Our first HH model didn't have a floor and despite moving the HH every few days the ground inside got too high a concentration of feces. We installed a new wire floor and tarps beneath collect the feces so that the ground underneath the HH didn't get too much wear. However the land just outside the entrance still received excessive fecal deposits and grazing. The rest of the enclosure was grazed and defecated on fairly evenly and recovers (with new lush growth) within a week or two of the chickens being moved off.
The CT causes more intense grazing but the birds are moved each day, preventing overgrazing. After moving the CT the grass recovers within a week or two. Feces are spread out except for the corner where they sleep, but this accumulation is small enough that the pasture absorbs it within two to three weeks.
Efficiency
The HH set up takes more time to move. The fencing must be taken down, the HH moved and the fencing put back up, but it accommodates many more birds--at least four times the number of layers and two times the number of meat birds.
The CT is much quicker to move but can't accommodate laying hens easily because nest boxes add so much more weight to the CT.
Fossil fuel use
Currently the HH requires a truck to move with one person
The CT is moved only by hand
Cost
The total cost of the HH was $1600, or approximately $10 per layer in the first year.
The total cost of the CT was $400, also approximately $10 per layer or $5 per meat chicken in the first year.
Accommodations
The HH has a much larger area protected from rain in which nest boxes and roosts can be situated. Roosts are important for keeping the birds off the cold wet ground during the rainy season.
The CT can be fitted with nest boxes and roosts but these items make it much too heavy for daily moving. Meat chickens are only raised in the summer so ground roosting is not as much of a concern.

There is a wealth of information available in books, movies and websites about the unhealthy, unsustainable and inhumane practices of industrial chicken farming. Rather than reproducing that work, we have collected below a list of ways in which a chicken tractor and a moving hoop house are a better way of rearing chickens for meat and eggs.

Other sustainable aspects of our operation[edit | edit source]

Heritage breeds
Conserving diversity in plant varieties and animal breeds is important for protecting against disease and maintaining the ability to raise products that do well in a particular climate. We started with a variety of breeds to see what worked best for us under our pasture and climate conditions. Two of the breeds, Production Red and Black Star, are industrial breeds. The other seven breeds are all heritage breeds. They include Minorca and Brown Leghorn, both of which are strictly egg layers, Araucana, Barred Rock, Australop and New Hampshire Red, all of which are dual purpose varieties.

Since winning the business plan competition, Shail Pec-Crouse decided to leave Wild Chick Farm to pursue other endeavors. Sarah Brunner continues as the sole owner of the business. Sarah is now in the process of rebuilding the pastured poultry farm at a new location in the Arcata bottoms. The new farm will be utilizing 40 acres of lush perennial pasture grasses owned by a local grass-fed beef rancher. In collaboration with the rancher, Sarah will graze poultry in rotation with the beef cattle. This multi-species utilization of pasture land is a mutually beneficial relationship ecologically and economically. Following behind the cattle, the poultry enjoy the shorter grass left by the cattle and in return they help sanitize the fields of fly larvae that would otherwise infect the cows with parasites.

Stay posted for new updates on the progress of the new farm site or request to be added to the email list serve at wildchickfarm@gmail.com. Also, an official Wld Chick Farm website is in the works and is scheduled to be online this spring 2008. An announcement will go out to all emails on the list serve. 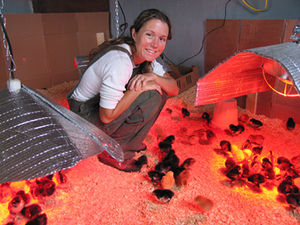 Sarah grew up in the suburbs of Marin County, north of San Francisco. She moved to Arcata, CA to attend Humboldt State Univerity and study sustaniable development. Sarah's interests eventually sharpened to include all things agricultural related and after graduating HSU, working on several local farms, and managing a local farmer's market, she and her husband adopted their first flock of laying hens. Up until that point, the majority of Sarah's farming experience was with row vegetable crops. But she quickly grew found of the new batch of chickens and developed a strong appreciation for livestock...and hasn't looked back since.

In the fall of 2005 she invited Shail to join her in developing a chicken farm business. 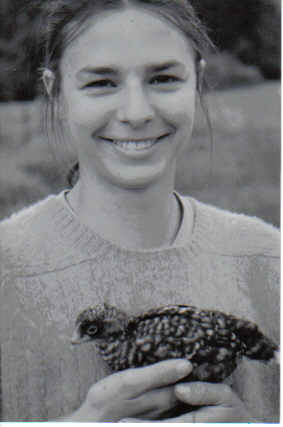 I became a vegetarian at the age of 13 and vegan at the age of 19. My reasons for having a more restricted diet were mainly because of the environmental impacts of animal farming and the atrocious conditions that most food animals are raised in today.

As my understanding of the environmental impacts of an American diet became more sophisticated, I took a closer look at my diet and my reasons for not eating various foods. I started to buy only organic, then as much local food as possible.

Last fall my friend Sarah was tossing around the idea of a chicken farm, and I told her I would be interested in joining her as I have a passion for raising animals and was excited about growing my own food.