This page describes VOC levels in plywood, which is a standard United States of America home construction material.

Plywood is the one of the main types of wood used in the construction of our homes. It has remained popular in United States construction, due to it's strong structure, durability, and ease of use. It is commonly used as flooring, siding and other frame work. The structure of plywood is interesting as it uses thin cuts of wood, veneers as they are called. These veneers are glued together with the grain at a right angle of the opposing sheet or veneer.This adds strength and flexibility as the wood has several different angles to keep the stability of the board.[1]Although plywood has remained popular it has become under more scrutiny due to the fact that the adhesives used contain formaldehyde. 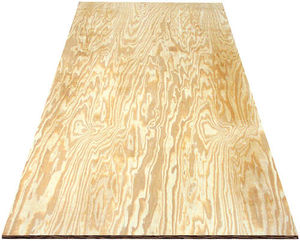 Plywood view from the side[2]

Adhesive resins have been used since the 1870's when they were accidentally discovered [1]. These resins have become increasingly cheaper and the use of both the resins and particle board have become more common with the consumer surplus of the 1950's. Particle board is similar to plywood; it is composed of small chips of wood that are pressed together by bonding it with formaldehyde resins. Particle board usually is found inside the house as it cannot handle moisture as well as plywood. Also, it does not have the strength that plywood has, in return particle board can be commonly found as the basis for cabinets and furniture.[1] Particle board also is cheaper than plywood. 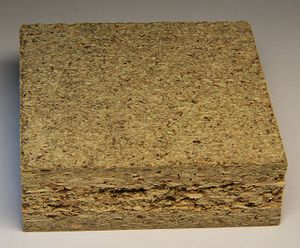 Particle Board, notice the chips of wood[3]

The major dilemma with the use of the formaldehyde resin is the slow release of formaldehyde as the bonds break apart due to heat and moisture. [4] According to the Environmental Protection Agency, Formaldehyde is "a colorless, pungent-smelling gas, can cause watery eyes, burning sensations in the eyes and throat, nausea, and difficulty in breathing in some humans exposed at elevated levels (above 0.1 parts per million)."[5] It has also been found to provoke asthma attacks and has caused cancer in lab animals.[6]

Use and Consumption[edit | edit source]

"U.S. demand for hardwood plywood is principally derived from demand for cabinets, furniture, store fixtures, recreational vehicles, and manufactured homes," according to the United States Intentional Trade Commission.[7] Plywood can be made either softwood or hard wood. Soft woods are from coniferous trees, while hard woods come from deciduous trees. A majority of plywood is made from domestic wood; the "U.S. firms purchased 72 percent of their wood from domestic sources and 19 percent from Canadian sources",[7] in 2006. As we can see, the demand for plywood has remained strong and is mostly produced domestically. See table below and keep in mind that we had a housing market crash and the production remained high. 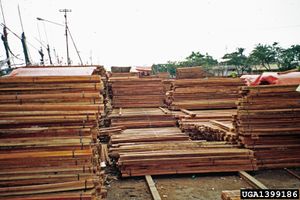 The main VOC that is tested in plywood is formaldehyde. It can either be measured by the amount of formaldehyde released from the product measured in parts per million or amount in the product usually measured in mg/g.[10] With increasing concern and consumer interest in eco-friendly products, the United States may begin stricter regulations. The table below shows the current regulations for plywood, although companies have to pass these regulations they are not required to label their products with the results.

The product choice is up to the consumer. Many companies do not show the amount of Formaldehyde levels in their plywood or particleboard. Some companies like Columbia Forest Products advertise their ability to create comparable products without the use of formaldehyde resins.[1] Their product is available for purchase at most home depots. The adhesive that is used is soy-based and the idea came from a professor at the University of Oregon. He tried to mimic the actions of mussels. Mussels can remain attached to rocks even through rough surf. The protein that mussels use is similar to soy protein. Professor KaiChang Li and his colleagues, "went ahead and found a good curing agent and basically cross linked the soy protein to make it stronger".[11] This has created a formaldehyde free product for a relatively comparable price. The table below is the cost of different sheets of plywood and their costs.[12] Note: PureBond® is made by Columbia Forest Products

Wood glues- Even for your household projects the wood glue you may use might also contain formaldehyde. There is a product by Eclectic products a company from Oregon that has a wood glue that is non-toxic and rivals in strength test with name brands. Check out there site or ask your local hardware store. [2]

Cabinets- Using stainless steel cabinets would be VOC free. Although if you still like the appearance of the traditional cabinets there are companies like SierraPine that produce Particle boards without any added formaldehyde resins and uses sources like bamboo and wheat instead of the traditional wood.[3]