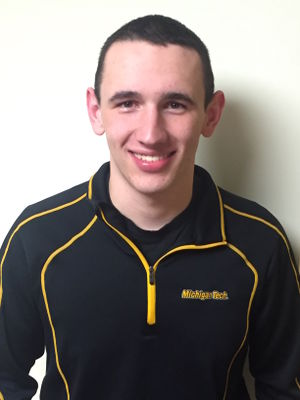 Hello, I am currently a Graduate Research Assistant in Material Science & Engineering. I am interested in Open Source Machines such as 3D printers and other CNC machines. I am also interested in the ways that 3D printing and other supporting technologies will help push the ways we go about our daily lives and how they can help make our day to day tasks easier and more efficient. I enjoy finding new uses for the technology and implementing different design methods, materials, or processes to push the boundaries of desktop additive manufacturing.

Jacob Franz received his Bachelor's degree in Mechanical Engineering from Michigan Technological University in the Spring of 2020. During his undergraduate degree, he was apart of the Open Source Hardware Enterprise. During his time in the enterprise, he worked on the Granulator MK II OSHE. His capstone project involved developing a Open Source Pellet Extruder Tool Head for a Desktop 3D Printer. This project inspired the development of the Open-Source Grinding Machine for Compression Screw Manufacturing. Currently working with J.M.Pearce on graduate research in Material Science and Engineering focusing on Open Source Hardware. Jacob is in the process of starting a company to help fund further development of compression screws for different plastic extrusion systems as well as supplying those who are unable to manufacture screws themselves.

This semester I have been working on my Capstone project Open Source Pellet Extruder Tool Head for a Desktop 3D Printer. I have designed and built 2 prototypes of the tool head this semester which has both been a learning experience in pellet extrusion. 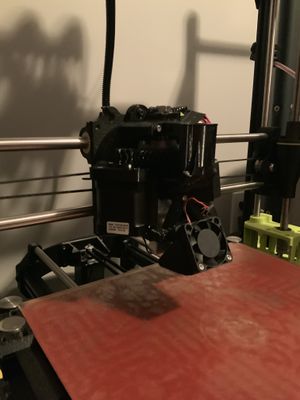 Version 1 of the Pellet extruder installed on a Taz 6

Most of the semester has been spent fabricating parts for the tool head such as a heater block for the extruder. I have also experimented with using Mold Max 60 high heat resistant silicone to make custom parts to interface with the heater block which exceeded 100°C which is above ABS glass transition temperature. In order to machine the heater block drill bushings were inserted into 3D Printed parts that also held the heater block in place and this allowed for holes to be precisely drilled ±0.05 mm as well helped keep the drill normal to the surface. While these worked well to make the block a drill press and or CNC machine would most like produce a more precise part. All other components on the current version of the tool head are 3D Printed out of ABS, PETG, and PLA.

Aside from the pellet extruder, I have also worked on the Granulator MK II OSHE. I had helped with revisions to the paper that was published. I performed maintenance on the machine after transporting it to a scale that exposed the machine to a lot of vibration. I started brainstorming ways to improve the machine for MK2.5 based on feedback received.

This semester I have finished the assembly of the Granulator MKll. Currently, the granulator is fully operational and has successfully granulated plastic. Future work to be done includes running more plastic through the machine, painting plywood panels for a more finished look, look into adding on a flywheel. 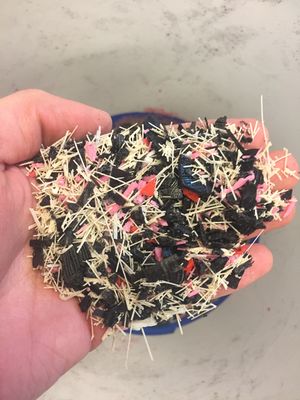 The enterprise had received a Prusa i3 MKll kit this semester which I had assembled the printer and did maintenance work when the printer had issues. Also, I helped with the production of the husky statue's this semester.

The Granulator MKll was a continuation from what Peter Gorecki and Walker Nelson had designed. This semester's task was to build the design model. We have not completed the granulator as of now due to unforeseen obstacles such as having to work around machine shop hours and having to wait for parts. Due to manufacturers not replying for a request for quotes for the granulation blades we had to make our own blades. All the parts besides the blades that required machining were done using a drill press, corded drill, and an angle grinder. So far one of the issues that we have found with the initial design is with the granulation screen. Because when we cut the pipe in half there was tension in the pipe which changed the dimensions. The granulator is close to being fully assembled. I am planning on completing the assembly over the summer as well as perform testing and make adjustments. I will update the Spring 2017 work section after completion of the machine.

This semester I have continued assembling the Granulator MKll and have also attended most of the recruiting events. Currently, the granulator is almost completely assembled. I have started working on the electrical components am currently waiting for the necessary parts to arrive to complete the wiring of the machine. I have designed the new granulation screen and vacuum adapter piece to work effectively with the new design. I worked with Daniel Seguin for heat-treating the granulation blades as well as stress relief heat treatment of the new pipe. Aubrey Woern and I have decided on fully enclosing the machine in plywood to protect users from the belt, and other moving parts, as well to give a barrier between the machine and the surrounding in case of a catastrophic failure. The panels will be cut out within the next month and installed soon after the start of the Spring 2018 semester. We will also be designing and 3D Printing extra covers to enclose parts of the machine that remain outside of the wooden panels.

If you do not have access to CNC mills that can drill holes precisely in each part I would highly recommend 3D Printing hole pattern jigs to help assist with getting holes drilled in the correct locations. We did not use this method at all while machining the parts however while building I noticed that there are inaccuracies when measuring by hand with calipers either due to the drill bit wandering when first making contact or the accuracy of our marking device. A stress relief heat treatment is necessary for cutting the granulation screen pipe in half in order to reduce the amount the pipe will deform. The heat treatment guidelines for the pipe that worked for the pipe used was 1 hour at 600 degrees Celsius. The temperature and duration can be found online for the particular steel you are working with. If you do not have access to a commercial furnace a DIY furnace that can melt aluminum, keep the temperature from mid 500 to 600 degrees Celsius for 1 hour, and the pipe can fit in it.

This semester I started working on the Ford C3 Grant Project. My main project was to design a belt cover for use on the plastic granulator. I also collaborated with Peter Gorecki and Walker Nelson in the early stages of designing the new plastic granulator. During this time we brainstormed ideas of cutting methods, potential design features, and what test, and calculations will need to be done. The main design goal for creating a belt cover was to have the cover be 3D printed using an Open Source 3D Printer, as well as not having to do any modifications to the current machine. My design uses the 4 preexisting holes on the legs. In order to attach the 3D printed parts to the machine, it will require new parts to fit through both the 3D printed part and the legs. Currently, The main components of the Belt cover are designed and on the waitlist to be printed at the start of next semester.