This semester I was assigned to do work on the OSHE team's Gigabot 3D printer. The Gigabot is a large scale 3D printer that can be used to make prints that are too big for smaller, conventional printers, and has a maximum build volume of eight cubic feet. The original printer was designed by the Gigabot team, here is a link to their website.Gigabot. The version of the Gigabot that our team got was a disassembled version that came it a kit. It was left to us in a semi-functioning state. At the beginning of the semester the only thing the printer could do was move one axis reliably. Both the Z and Y axes were having difficulties moving their full range, and the extruder assembly didn't have enough torque from the motor to push plastic through the print nozzle. The work done on the Gigabot this semester was done mainly to solve these three problems, as well as calibrate the printer so that it could print reliably.

The first thing done to solve the issues on the Gigabot was to modify the frame so that it was square in every direction and the axes would no longer catch. This was done by disassembling the top half of the frame and inserting spacers between the vertical Z axis rails and the horizontal crossbeam at the top of the frame. 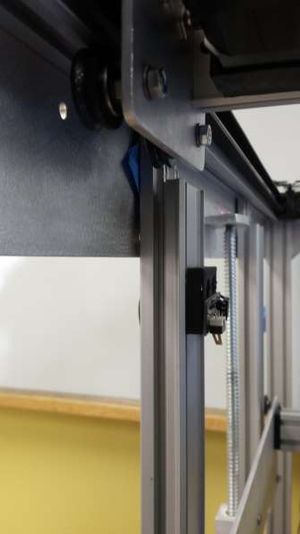 Once the spacers were inserted between the metal plate and the vertical beam, the Z axis was free to move over its entire range. The next fix was to file down the tops of the vertical beams so that the Y carriage, shown in the image above could pass over them without sticking. 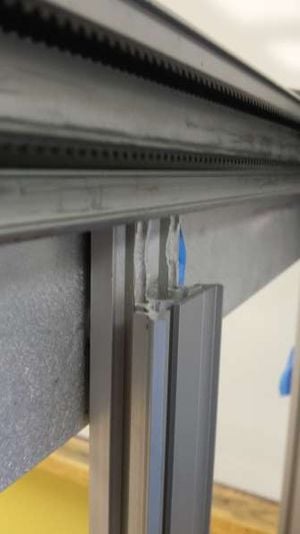 The third fix on the Gigabot was to redesign the extruder head so that the motor could supply adequate torque to the hobbed bolt in order to push the filament through the hot-end nozzle. The old extruder design used a hobbed gear directly on the motor shaft, while the new design, shown to the right, uses a gear series to up the torque the motor supplies. 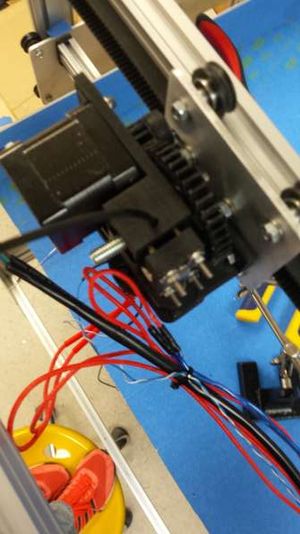 After installing this new extruder head, and spending a fair amount of time calibrating the printer and getting everything to be just right, we were able to get a print! The print can be seen here. 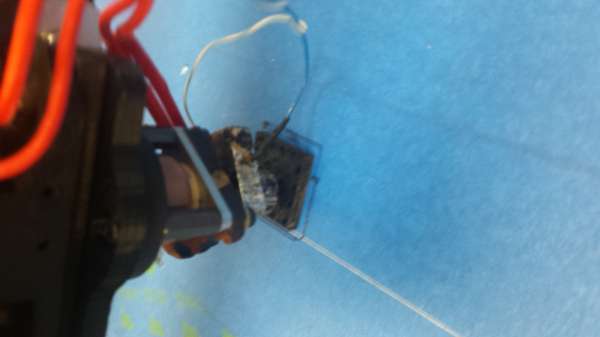 I was also on the team responsible for the completion of the induction furnace this semester. The main tasks I completed on this project included the design and solid modelling of most of the mounting components, water blocks, large electrical contacts, and tubing systems. So far the project has been successful, however, the parts we needed to have machined before the end of the semester were held back by some unforeseen delays in the shop. This being said, the induction furnace still needs some work, however, is near completion. Build days on the furnace are scheduled to take place around the end of the spring semester. As of right now the Induction furnace still needs to be assembled, but all design work is complete.

During the spring semester of 2015 I worked on a project to improve the computer accessibility of ALS patients. My partner Handy Chandra and I were contacted by a local man living in Hancock, MI through the Open Source Hardware Enterprise here at Tech. The man, Louis Braun, was looking for a way to deal with the decreased access he had to his computer due to ALS beginning to immobilize his arms. Here is a link to the page that will tell you all about what we did!

During the past Fall semester, and my last semester as an undergraduate at Michigan Technological University, my partner Peter Gorecki and I were tasked with redesigning the previous prototype for the plastic recycling/granulation machine. We came up with a completely new ground-up redesign of the machine that has a higher user friendliness, is easier to maintain, and reduces the cost of the machine by about 50%. You can see the results of the project here, as well as a complete bill of materials for all of the components and the plans required to build the machine. Here is a link to the google drive folder containing the files you will need for the project. It also includes a project report with lots of shiny pictures and a complete guide to how we designed the machine and how you can build it! If you prefer, here is a link to the Open Science Framework page we have created that also gives access to the report, 3D CAD files and the Matlab code we used during the design.