Is a functional out of the box keyboard control, mouse control, and speech software designed specifically for people with motor and speech limitations.

This software is open source and free. But it only supports windows. It will work using mouse, keyboard, or several eye tracker device such as Tobii EyeX, Eye Tribe and ITU Gaze Tracker

Is a software to help people with disabilities to communicate and interact with their environment and web. It has a lot of features, such as text to speech, preset sentence and word, read and write emails, web, videos, music, ebooks, etc.

This is a free, open source and easily customizable. It only supports windows and can be used with mouse, webcam, or several eye tracker device such as Tobii EyeX, Eye Tribe and ITU Gaze Tracker

This is a free and open source software that moves the cursor on computer screen as you move your head. It is easy to use and works with any webcam. It can run on windows and linux.

This also another program to control the movement of cursor using our head. It is a free program that run only on windows.

Another free, but not open source software for keyboard control, mouse control and text to speech. It features Swiftkey's prediction engine, movable and customizable on screen keyboard. It supports only windows 7 and 8. It supports any hardware that can control mouse cursor. It also supports eye tracking device such as Tobii EyeX, Tobii Rex, Tobii X2-30 (not the X2-60), Tobii PCEyeGo (with firmware 1.1.5 or later), and The Eye Tribe.

Tobii EyeX Controller is low cost eye tracker to track the location of eye gaze for interactive and entertainment purposes. Together with the suitable software on computer, this device can accurately track the movement of eye.

It can only operate on microsoft windows 7, 8 or 10 with USB 3.0. Unfortunately, it needs at least core i5 and 8GB RAM for optimal performance. This hardware could be used with open source software such as OptiKey, Click2speak, Gazespeaker, and BKB

This is also low cost commercial eye tracker that used infrared illumination to detect the movement of eye. It also require at least core i5, 1GB RAM, USB 3.0. Also it will only run on Windows 7, Windows 8, Windows 10, or MAC mountain lion 10.8.4. This hardware could be used with open source software such as OptiKey, Click2speak, Gazespeaker, and BKB.

This is an open source hardware project designed to help artists and graffiti writers suffering from ALS to draw using only their eyes. There are clear instructions how to build the head mounted head tracker on the website. On their website, they said the project has already been used by graffiti writers with suceess.

They claim the hardware would only costs $50 with PS3 Eye and a pair of sunglasses. But the software provided with this project only support drawing functionality, and it is unclear whether we could use established software such as OptiKey, Click2speak, Gazespeaker, or BKB with this hardware.

An improved version of the device, EyeWriter 2.0, adds accuracy and allows people to move their head while using the device. In comparison, the original EyeWriter is designed to be used in motionless head. The new version is not mounted on the head, rather near the computer screen. It costs about $200.

eyeCan is an open source hardware and software project for head mounted Eye Tracking. They used the same hardware as the EyeWriter version 1 project. The difference is that they developed their own software. It seems they only developed the software to control mouse cursor, but no keyboard. Video instruction and source code is provided on their project homepage.

At first try, we found Tobii Eyex with Optikey hard to use and inaccurate. But after experimenting with several options and configurations we found several way to make them easier to use. After using them after a while and become quite adept at it, we are sure this is an acceptable solution with just a few drawbacks as we will discuss below shortly.

How to use Tobii Eyex with OptiKey:

We have a video to demonstrate how to use Tobii EyeX with Optikey to write email in the following link. Youtube

Drawback of this solution:

This semester we worked on making our own open-source version of an eye tracking camera. The design concept was inspired by the EyeWriter project mentioned above, and we used the EyeWriter as the basic development platform for our system. The main improvement that has been made to the eye-tracking system takes the form of an off-screen keyboard. A traditional on-screen keyboard that would be used with an eye tracker is large and takes up a lot of space on the screen that could be used for other things. We decided a good solution to this problem would be a physical keyboard that could extend out of the back of the monitor or laptop screen. This will work nicely with an eye tracking camera and in the future we plan to combine the camera that we built and the off-screen keyboard into one design. If you are interested in this project check out the report we wrote about it. It has step-by step instructions on how to build our eye tracker and off-screen keyboard prototypes.

The build instructions in the report call for several CAD models to be 3D printed. Here are the links for the files you'll need!

Since we've only been working on this project for one semester there is still a lot of work that needs to be done to polish it up and finish it. Here are some of the things we have yet to do for the eye tracker:

And for the off-screen keyboard: 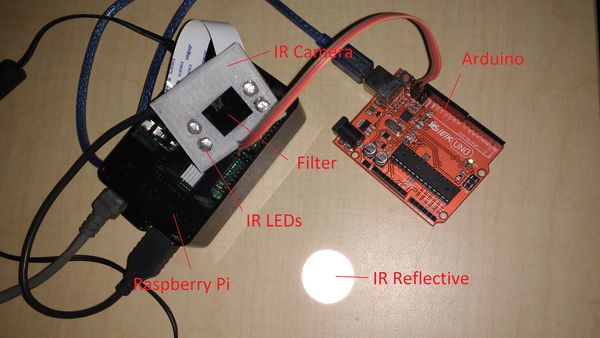 This is our completed head tracking system made out of Raspberry Pi, Arduino, and Pi Noir Camera.

We used a round IR reflective patch as the object to be tracked. Because the system has its own infrared lighting source, the camera will see the reflective patch as a round bright object while the other surrounding dark because no visible light is going through the filter. This will make tracking the object easier. This also ensure robust detection where no other object will be detected.

Please see project report in the "Eye Tracking Camera and Off-Screen Keyboard" section in this page for instruction how to build this system. Full step by step instructions is described there to allow complete recreation of the system

Page data
Retrieved from "https://www.appropedia.org/w/index.php?title=Open_Source_User_Interface&oldid=667859"
Cookies help us deliver our services. By using our services, you agree to our use of cookies.
Categories:
About Appropedia · Policies · Contact · Content is available under CC-BY-SA-4.0 unless otherwise noted.