Urban agriculture is the practice of of cultivating, processing, and distributing food in or around a village, town, or city. It has been a practice in ancient Egypt, as well as being used in the United States of America during World War I, World War II, and the Great Depression to supplement food supplies. With urban agriculture’s success, it is now being used in many developed nations and undeveloped nations.[1] A country where it has had success in recent years is Japan. 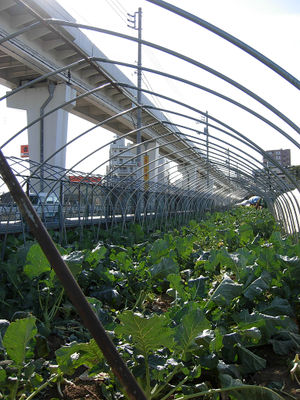 Why It Is Good[edit | edit source]

According to the Ministry of Agriculture, Forestry and Fisheries, there are five main reasons why urban agriculture is a good practice and why gardens in the city are beneficial. These are:

1. The are a source of fresh and safe products, including organic and low-chemical crops, that are increasingly demanded by urban consumers. These can be locally produced and consumed based on relationships of trust between farmers and city dwellers.

2. They provide opportunity for urban residents’ engagement in agricultural activities, both directly and through exchange between producers and consumers with the sales of agricultural products at local farm stands.

3. They provide open space for disaster management, including fire spread prevention, evacuation space for earthquakes and open space in case of other disasters.

4. They are a resource for recreation and well-being, including green space for personal leisure and spiritual comfort.

5. They provide education and awareness-raising for improving urban residents’ understanding of agriculture and food issues.[4]

There are challenges towards urban agriculture in Japan. The first is the average age of the farming population getting higher, making it unsure how well the practice will stay in the future after the older farmers stop. The next is taxes on the land used and the price of urban housing, which drives potential farmers away. The final main problem is one of production. Currently, locally grown vegetables are a small market, but it is unsure if the practice could keep up with demand if it became mainstream. Due to the size of the average garden, heavy production is not an option for many urban farmers. One of the few methods that would fix this would be to use chemicals, which goes against what most farmers do. Urban agriculture is a practice that potentially will be in trouble in the future if it continues as it is. However, if the practice is given thought, it has the potential of creating a more “green” and sustainable Japan.[5]

ACROS Fukuoka building: An office building in Fukuoka, Japan that features 35,000 plants representing 76 species along with sustainable features such as using rainwater to maintain the plants. 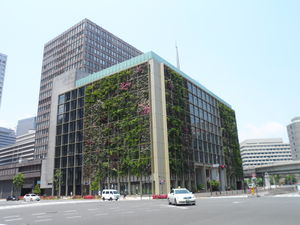 Pasona O2 building: A former bank building in Tokyo remodeled to provide training in agriculture to young people having trouble finding employment and middle-aged people in search of a second career. It features multiple gardens throughout and vegetables growing everywhere, such as tomatoes hanging from the ceiling in the meeting rooms.[7] [8]

https://www.appropedia.org/ACROS_Fukuoka_building A better look at the ACROS Fukuoka building