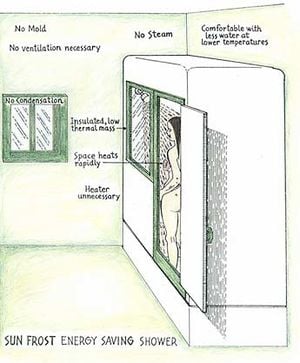 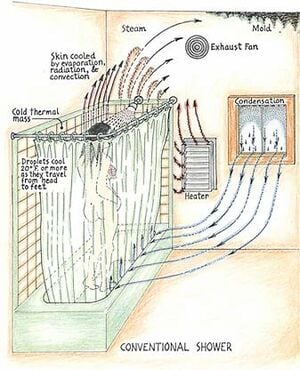 The design features of a conventional shower minimize thermal comfort, maximize energy use and water consumption while exacerbating moisture problems. Most of these negative effects are caused by evaporation. As small droplets of water fall from the showerhead, the high surface area and velocity of the particles of hot water experience conditions, which maximize evaporative cooling of the droplets. Water saving showerheads that produce exceptionally small water particles can actually further increase evaporation. Water Particles can be cooled by as much as 30ºF / 17ºC as they fall from the showerhead to the ground. Evaporation is also accelerated by convective air currents and low humidity. With the shower curtain in place, a shower area can act as a thermal chimney. Cold air enters from below the curtain; then rises as it is heated by the walls of the shower stall, falling particles of hot water, and the shower's occupant. The humidity of the moving air is kept low by condensing its moisture load on cold surfaces in the bathroom. This often results in mold growth, rotting walls or ceilings, and wet insulation; a problem that can be particularly acute in straw bale construction.

Bathroom moisture is often controlled by the use of an exhaust fan. The fan sucks out the moisture-laden air, which is then replaced by drier outside air. During the winter, the moisture level in outside air is particularly low, further accelerating the rate of evaporation. In addition, heat is required for the fan's make up air.

Evaporation is also the main source of heat loss from our skin. Lower humidity will result in increased heat loss from the shower's occupant and require turning up the hot water to maintain comfortable conditions. If a window is opened to control moisture, the temperature of the bathroom will be lowered; to stay comfortable the shower's occupant will have to turn up the hot water, which causes the bathroom to turn into a steam room as moisture in the humid air leaving the shower condenses in the cooler room air. The walls of a bathroom are often covered with high thermal mass materials, such as ceramic tiles. The tiles will typically be below skin temperature resulting in additional heat loss via radiation and convection. The shower's occupant will once again compensate for this heat loss by turning up the hot water even further.

There is a simple solution to this myriad of related problems; preventing airflow to and from the showering area is the key, in other words sealing the shower stall. Additional benefits can be obtained by the incorporation of insulated low thermal mass walls that heat up rapidly. The result is a shower stall where air currents are minimized, humidity is increased and the air is warmer. All these effects will increase thermal comfort and reduce energy and water consumption. Another benefit is that with the air in the shower warmed, the water vapor present will not be condensing in the air, eliminating steamy conditions.

If the walls of the shower have a fairly low thermal mass, the shower stall will heat up rapidly so a comfortable shower can be taken even in an unheated bathroom. We constructed a shower stall for Home Power magazine. The stall has very low thermal mass; the walls are covered with "Reflectics" (aluminized bubble wrap). The top of the shower is covered with a clear plastic bubble, see photo. The shower is located in an unheated greenhouse. During the winter, when greenhouse temperatures dip to 38ºF/3,33ºC, you can still take a comfortable shower.

A fiberglass tub/shower combination in my home was sealed with plywood and Plexiglas. This configuration allows for a comfortable shower when the air in my bathroom dips to 50ºF/10ºC. After showering, I can dry off in the warmed up shower. A vent is opened in the ceiling to dry off the interior. This arrangement allows me to take a comfortable shower in a cold bathroom while using only 1/2 gallon /1,89 liters of water per minute. Many showers use a much as 3 gallons /11,36 liters of water per minute. 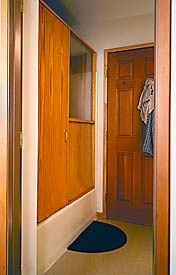 This energy efficient shower combines effectively with solar heating, since it allows for a fairly comfortable shower when water temperatures dip to 90ºF /32,2ºC (Typical water temperature for a shower is 105ºF / 40,5ºC). In tropical countries showers are often unheated. The water is generally not quite warm enough for a comfortable shower. To boost the temperature of the water, an electrical heater located at the showerhead is often used. The sealed shower described here could move the water into the comfort zone without using inefficient and costly electrical heating.