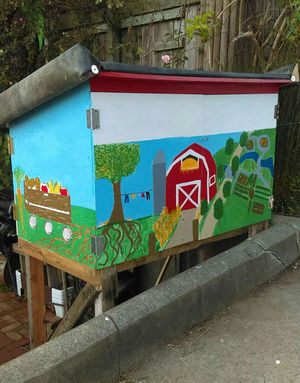 The purpose of this project is to create a new way for The Sanctuary to distribute donated food to the public in a free, convenient way. The project successfully met all of the weighted criterion set for the abundant free kiosk. The A-Team designed a permanent, weather-proof structure from which The Sanctuary can now easily distribute free food to the community of Arcata. The A-Team was brought together through the Cal Poly Humboldt class, Engineering 215 - Introduction to Design, taught by Lonny Grafman.

The Fall 2016 ENGR 215 class, taught by Lonny Grafman, made six different design projects for The Sanctuary, a local, nonprofit organization promoting sustainability and creativity. The A-Team chose the Abundant Free Food Kiosk as their project. Before implementation of the food kiosk, The Sanctuary was having difficulty giving out donated food. They were distributing their food out of cardboard boxes from their pantry in the basement level of the building. This became a problem as the public was unaware of the free food available. Throughout the semester, The A-Team researched, designed, prototyped, and built a ventilated, insulated, permanent kiosk at the sidewalk level to give The Sanctuary am easier, more accessible way to distribute the free food to the public.

The Sanctuary in Arcata is often given large amounts of food to distribute to the public. They previously did not have any efficient ways to distribute this food, making it difficult to give to the people. The objective of The Abundant Free Food Kiosk is to design and implement a method that provides free food to the community using The Sanctuary`s resources at a low cost.

Below is a table of criteria for The Abundant Free Food Kiosk. Each criterion is weighted on a scale of one to ten to determine its degree of importance.

The Abundant Free Food Kiosk is a large box made of plywood that sits on its stand, allowing it to be raised to the sidewalk. It has two doors on each side, allowing easy accessibility for the public walking by on the sidewalk as well as people from The Sanctuary who will load food from the back two doors. The entire box contains insulation on the inside and vents on the side of the box to allow the food inside to stay as fresh as possible as it sits outside. The Abundant Free Food Kiosk now serves as an efficient way to make sure The Sanctuary can easily give out the food it is given. 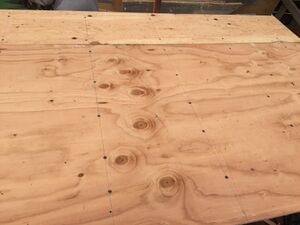 Caption
Assemble necessary tools and materials for construction. Sizes may vary according to desired kiosk size.
2 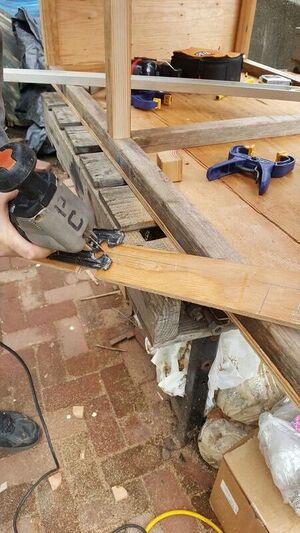 Caption
Make box frame screwing 18 2"x2" pieces of wood together at the desired length. There will be 4 horizontal pieces longer than the rest, used for the front and back faces of the frame. Two of these pieces should be enclosing the bottom left and right pieces, giving a sturdier frame. The vertical corner pieces will be of different heights to allow the front of the kiosk to have a larger opening than the back. Allow left and right top pieces of the frame to sit diagonally on the vertical frame pieces. There will be an additional 4 roof pieces spaced evenly inside the frame to provide additional support. Two vertical pieces placed in the middle of the front and back sides of the frame will also be of different heights.
3 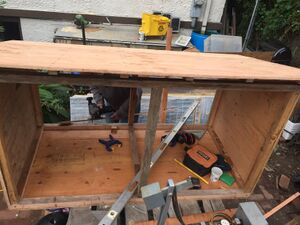 Caption
screw on 4 pieces of plywood to the left, right, and bottom sides of the frame creating the two outer walls of the kiosk and the bottom piece. The roof will be a larger piece in order to protect the kiosk from weathering.
4 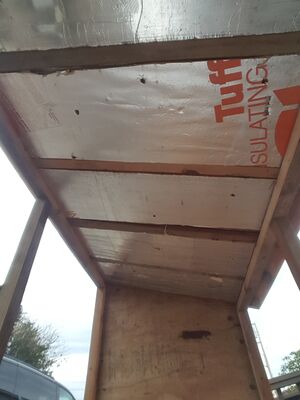 Caption
Before the inner walls of the kiosk are screwed in, place a dividing 2"x2" in the center of the floor, aligned with the center vertical 2"x2"'s of the frame. This 2"x2" should be of the same length as the left and right pieces of the frame. After the final 2"x2" is placed on the floor piece of plywood, add an insulating layer in between where the outer plywood and the inner plywood layers would be.
5 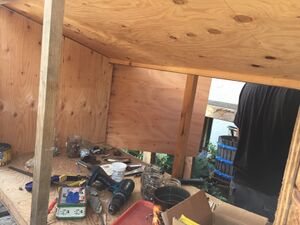 Caption
After the insulation is placed on all four built walls of the kiosk, place the inner layer of plywood, or material of choice, to enclose the insulation and 2"x2" framing. The only framing visible should be from side views. To enclose the roof, cut slots in a piece of plywood to the correct length of the roof to seal the top insulation inside.
6 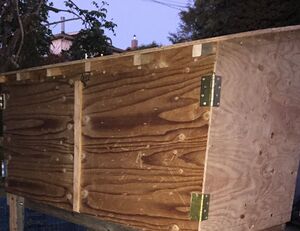 Caption
Cut out the door the proper dimensions of the front and back empty faces of the kiosk for doors. Choose hinges compatible with the box to screw on the left and right walls of the kiosk. After placing all 4 doors on the front and back faces of the kiosk, attach a thin piece of plywood, half on, to the end of on door from each side (right or left door) for better sealing. This makes sure that one door is closed before the other. Then attach locks on the doors to keep them closed.
7 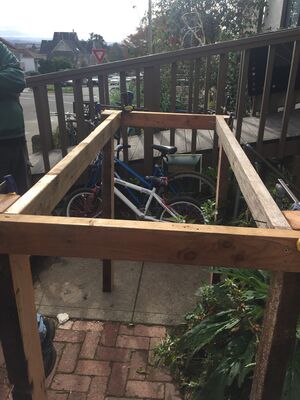 Caption
After construction of the top box of the kiosk is complete, make the stand. The legs will be made of four 4"x4" pieces of wood at the desired height. Inside the 4"x4" legs, will be four 2"x4" pieces of wood to provide a small frame, two long ones being the length of the kiosk and two shorter being the width of the kiosk. This frame will be all held together by eight bolts placed in length and width directions on each leg into the 2"x4" frame.
8 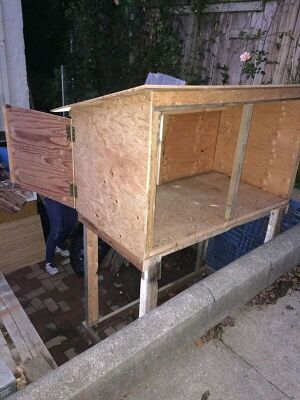 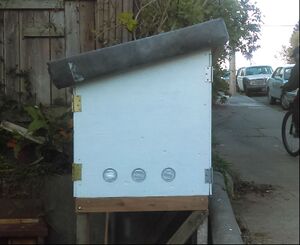 Caption
Drill holes for vents in the top of the right wall, and in the bottom of the left wall (or vice versa).

The Kiosk is easy to maintain as it doesn't involve any heavy annual cleaning or maintenance. Maintenance includes wiping down the insides of the box from possible food smudges and replacements of parts if damaged.

The Sanctuary can now place three 18" by 20" cardboard boxes full of food in the kiosk. This food is now available for the community to take.

The finished Abundant Free Food Kiosk is a sturdy, well-insulated cabinet that will serve its purpose and provide The Sanctuary with a more efficient method of distributing free food. The A-Team was very pleased with the overall product of the kiosk and was glad to be able to participate in giving back to the community of Arcata. We hope the kiosk influences others to build the same or similar design to share resources amongst their communities the way The Sanctuary is now able to. The next steps of this project are to coat the kiosk with a waterproof layer in order for the paint to not wash off with the rain. This specific project was continued by The Sanctuary; The Sanctuary constructed a living roof on top of the kiosk by covering the roof with pond liner and adding a gutter system. 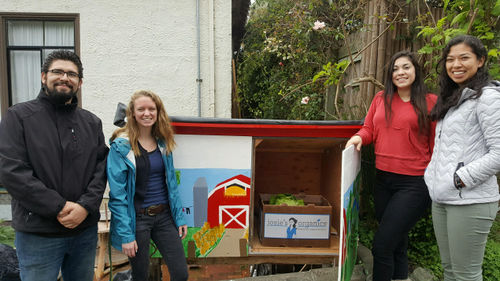 Still highly used by the public. Does the job well, to hold food. A new problem occurred when people started dumping stuff other than food in it. Not really avoidable, depends on the community. The supply of food comes from generous donations from local farmers & farms, leftovers from organizations, excess from catering events, etc. The food depends on the donors. The project is very a good bridge to the public, low maintenance, and working nicely to feed the community. 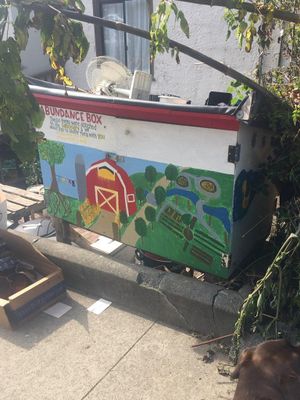 Katie was interviewed about the abundant free food box, here are some updates:

Talked to Katie about the Free Food Kiosk. She says it is still actively being used by community members. Back doors haven't been used as much, when food is loaded in by Sanctuary team they are loading everything in from the front doors. Kiosk is left on locked during the day, folks are free to open kiosk and take food or leave food when kiosk is unlocked. Mostly canned foods being donated, would like more fresh foods. People have been dropping off clothes, old art supplies and their garbage rather than food. Katie mentioned adding sign that says "No clothes donations. only food" sign for folks to be more careful with their deposits, she also mentioned it would be nice to repaint some parts of the box but other than those 2 minor things it is working great.