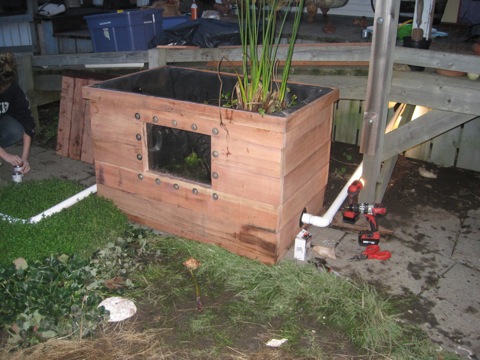 The Truth Tank Greywater System was designed to provide a greywater treatment system for a satellite solar shower located on the grounds of the Somoa Hostel. The system was designed to follow California greywater standards while also meeting the criteria of the Humboldt Bay Center for Sustainable Living. After careful consideration of alternative solutions, a final design was chosen and constructed at a private home for testing before its eventual implementation at the Samoa Hostel in the spring of 2011.

The Humboldt Bay Center for Sustainable Living is constructing a hostel at the Samoa Cookhouse to serve as inexpensive lodging for travelers as well as an experiential education opportunity in sustainable living and historical restoration. The hostel will include campsites, which have their own solar powered shower facility. The greywater produced by the shower will be treated and disposed of by the Truth Tank Greywater System.The system will be tested by using it with a claw foot bath tub before moving it to the Samoa Hostel for use with the solar shower.

The Truth Tank Greywater System was designed to provide a greywater treatment system for a satellite solar shower located on the grounds of the Somoa Hostel.

The costs involved in creating the Truth Tank Greywater System come in two forms: hours of labor and monetary costs. 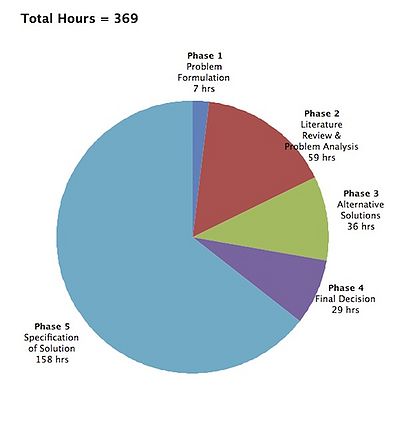 Below are the costs of materials to construct the Truth Tank. Costs were decreased slightly by donations, student discounts, and using recycled materials. However, due to the quality of materials needed to create the Truth Tank Greywater System our team went over budget to ensure the structural soundness and longevity of the system.

The system was designed to require as little maintenance as possible there is still some upkeep that will be required to keep the system operational. Any solids that have settled in the surge tank will need to be removed. The piping as well as the pea gravel can be rinsed by pouring water directly into the constructed wetland tank and letting it run out of the open flush caps. If any plants should die they will need to be replaced. The window may need to be wiped down periodically to maintain its transparency. Finally and metal parts that rust will need to be replaced. A chart describing the projected time required for these maintenance activities can be found below.

Fig. 1: A drawing of the entire system. ED: This should be redrawn to have the inlet from the shower at the top of the tank and the exit from the tank at the bottom. This way greywater is not stored from long (it turns into blackwater in about 24 hours). Also what are the height differences?

Engineered Wetlands<ref> The output location also creates head, or initial height of the water, to aid the movement of the water through the system using gravity. The surge tank also has a metal grate on the top to prevent contact with the greywater as legally required by California Law.<ref>California Greywater Law Chapter 16a: California Plumbing Code<ref> The water leaves the surge tank and enters the constructed wetland tank through a one and a half inch diameter PVC pipe.

The pipe enters the tank at the bottom of the side through a water tight bulkhead and is surrounded by large, coarse gravel for at least three inches on every direction to prevent the gravel from becoming clogged. The rest of the tank is filled with pea gravel that acts as a substrate on which a biofilm of microorganisms, which will treat the greywater, can form. In the tank there are two baffles. The first baffle is anchored to the floor and the second baffle is suspended from the top of the tank. The first baffle is two inches shorter than the gravel line, so the greywater will always be subsurface, which is legally required by California Law. There are two inches of space for the water to move below the suspended baffle. After the greywater flows below the second baffle the water then rises to the outlet hole, which is made water-tight using a bulkhead. The outlet hole is surrounded by coarse gravel for at least three inches on every direction to prevent blockage from solids. The box and baffles are made of redwood. The interior is lined with pond liner and the front side contains a Plexiglas window that can be viewed by moving a curtain, which shades the window. The constructed wetland tank contains bulrushes that uptake nutrients and accommodate microorganisms in their root systems that break down contaminants in the water.

In the plumbing just after the constructed wetland tank is another flush cap followed by a valve. The value can turn off the leach field, forcing any water used for rinsing out of the flush cap. The greywater then enters a three inch diameter PVC pipe, which is drilled with holes of descending size and elevation. This pipe that resides in a trench, filled with mulch. The water is gradually released from the pipe two inches below the surface, as required by California greywater law. The leachfield allows for further biological treatment by microorganisms on the mulch before its final percolation into the ground. 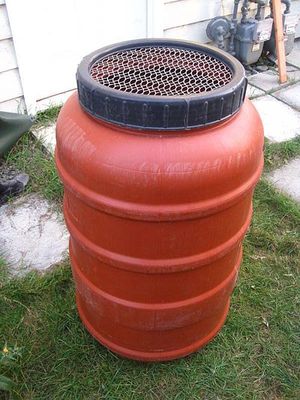 Fig. 2: The pickled pepper barrel that was made into a surge tank with protective mesh installed on top.

The greywater system is connected to the shower by a one and a half inch PVC pipe that goes to a surge tank constructed from a pepper barrel. The pipe enters the surge tank through a hole, one inch from the bottom, which is made water-tight by bulkheads. The tank contains water hyacinth. The pipe outlet is constructed in the same way as the inlet, with bulkheads and is located higher than the inlet level so the water must rise to the outlet. This forces the water to remain in the surge tank for a period of time, allowing some solids to settle. The surge tank has a metal grate attached to the top to prevent people from touching the greywater. This barrier is installed by cutting a circular piece from the grate and putting it in the top of the cap ring of the pepper barrel so that the sharp edges of the grate stick into the plastic. 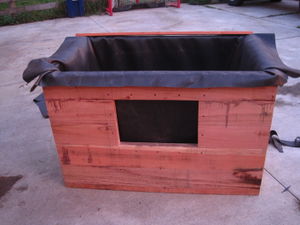 Fig. 3: The constructed wetland tank while it was being assembled.

The one and a half inch PVC pipe that comes from the surge tank has flush valve close to the tank so that the inlet side of the tank may be easily cleaned and the section of gravel in front of the first baffle can be rinsed out. All sides of the redwood box are constructed from pieces of two inch by six inch redwood boards. The pieces of redwood are cut to the appropriate size for each side and the bottom of the tank, evenly spaced holes are drilled along the two inch sides of the boards and dowel are inserted into the holes. Once the dowels are in place, the appropriate number of boards are glued together and clamped tightly for twenty-four hours to allow for a tight seal and proper drying time. Once all sides are constructed, they are sanded for a good fit and smooth finish. An inch and a half hole is then cut into the center of the small sides, near the bottom, so that a bulkhead can be installed and a one and a half inch PVC pipe may be passed through. A rectangular hole is cut into the front face that is one inch smaller than the Plexiglas window pane on all sides. An appropriate number of holes are then drilled into the Plexiglas window pane and front redwood side, inside the one inch margin, where the bolts will be screwed through.

The box is held together by screws through the bottom that go into each side as well as three galvanized L-shaped brackets in each corner of the box. The baffles are constructed out of half inch thick by six inch redwood fence boards. The first baffle stands from the bottom of the tank should be two inches shorter than the surface of the pea gravel, setting the waterline below the surface,as required by California greywater law. The second baffle should leave a margin of at least two inches from the bottom of the tank and be suspended from the top of the tank. The baffles are constructed by holding together the sized fence board pieces and attaching them together with small wooden braces that are screwed in with stainless steel screws.

After the pond liner is set into the box, two, one and a half inch holes, matching up with the inlet and outlet pipe holes, are then cut into the pond liner and the bulkheads are installed, creating a water-tight seal for the inlet and outlet pipes. A rectangular hole is then cut out of the pond liner that is the size of the rectangular hole in the wood face. The Plexiglas is attached to the wood face, pinching against the pond liner to create a water-tight seal. The baffles are water proofed using pine tar and installed in the box using the pea gravel for support. The box is then filled with pea-gravel and coarse-gravel so that there is roughly a three inch margin of coarse gravel about each inlet/outlet pipe so that solids do not accumulate at the mouth of the pipe. The remainder of the tank volume is filled with pea-gravel as appropriate wetland plants are being planted.

Some components of the system are installed at a private home for testing, while others are being stored until they are installed at the Samoa Hostel. Upon initial testing at the current location water was able to flow through the plumbing from the source through the tank and into the leach field. This testing was able to be done rapidly, as pea gravel is one of the components of the system that will not be installed until it systems is moved to its final location.

One of the main concerns our team has had throughout the design and construction process is how to correctly size the system. The system is sized so the tank holds 16 gallons of water, enough for a 10 minute shower from the solar shower. The capacity of the system as a whole can be altered by moving the outlet hole on the surge tank up or down, requiring more or less water to accumulate before the water continues on its path. There is a concern that if the system suddenly recieved a large amount of water that the water could move through the system without recieve much treatment at all. The solution to this problem is the leachfield. In the state of California the recommened method for disposing of greywater is to release it into the ground through a leachfield.Since the last component of our system is a leachfield, no matter how fast the water goes through the system it will always be meeting the California greywater standards and any treatment it receives in the earlier parts of our system would make it surpass California greywater standards.

The constructed wetland tank and the leach field of the Truth Tank Greywater system is currently installed at a private resident to be tested before being installed on location at the Samoa Hostel. As construction of the Hostel moves forward the solar shower will be constructed and the Truth Tank system can be moved. The move will be an opportunity to disassemble the plumbing of the system and make any changed that are found to be needed during testing.