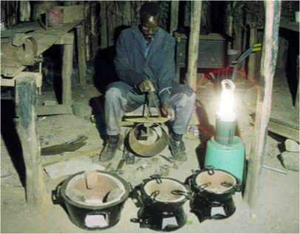 Since electric light is normally needed on demand, the only way of ensuring this is to provide electrical storage in the form of a battery. It is possible to use primary batteries (ie dry cells) which are charged when bought and thrown away when exhausted. These are convenient but extremely expensive in terms of electrical energy costs and are particularly expensive in the tropics since transport and distribution costs are incurred in moving them to the rural areas.

Secondary batteries, which are rechargeable, are more cost-effective than primary batteries, but an investment in equipment to recharge them becomes necessary. The two main secondary battery options available are lead-acid and nickel-cadmium batteries; the former being similar to the batteries used in cars. Nickel-cadmium batteries are generally less available (except as dry-cell substitutes) and cost more, but they can be more robust and tolerant of abuse than lead-acid batteries. However they self-discharge quite quickly if not used. Electrical energy from a lead-acid battery can cost as little as one twentieth to one fifth as much for the same amount of energy delivered from primary (dry) batteries.

For most lighting purposes lead-acid batteries are probably the easiest and cheapest secondary cell option. They are available as deep-discharge batteries which have a longer life than car batteries, and if looked after tend to be better for general electrical storage. Most lead-acid and nickel-cadmium batteries require regular checking of their electrolyte level and topping up with distilled or deionised water, (not with acid). Rain water can be used for this purpose, providing it has not been contaminated in any way. Low maintenance and maintenance-free lead-acid batteries are also available, at slightly increased cost.

Typical present deep-discharge load-acid battery costs are in the region of £60/kWh of total rated capacity or £120/kWh of usable storage, while nickel-cadmium will be about three times this level. The cost increases with some specialist types and very small batteries.

Batteries are generally provided with nominal voltages in multiples of 2V; common larger capacity lead-acid batteries will be 12V or 24V nominal voltage. Filament bulbs can be obtained which operate at almost any battery voltage, but fluorescent and vapour discharge lamps need 'mains voltage' (typically 240V) ac (alternating current). This can be readily provided by interfacing an appropriate inverter between the battery and the lamp; the high efficiency of such lamps make it well worth investing in an inverter if long hours of light are needed. Some small fluorescent lights in fact include a built-in inverter, and these often run at higher frequency than mains frequency which improves the light's efficiency still further. In most cases it will be best to obtain a fluorescent light with a built-in inverter so it can be directly connected to a 12V or 24V dc (battery) source.

Finally, it is important to note that cable runs should be kept as short as possible with low voltage supplies, (or very heavy cable must be used) otherwise significant losses will occur in the cables. A 1.2V voltage drop in a 12V system represents a loss of 10% of the power transmitted down the cable. The voltage drop is numerically equal to the current in amps times the resistance of the cable in ohms; 1mm² copper cable will have a voltage drop of 0.025A, so 10m of 1mm² cable carrying 1.25A will have a voltage drop of 1.25 x 0.042 x 10 = 0.525V. This represents about 96% cable efficiency, which is acceptable. However, 100m of the same cable will cause a voltage drop of 5.25V which will cause the light not to work and in any case represents a quite unacceptable loss of nearly 50% of the energy supplied.

A 30W fluorescent light (for example) running off a battery with an inverter for six hours per night will consume 180Wh each 24 hours. Losses in the inverter, cables and the battery will increase this requirement to about 300Wh/24h. To avoid more than 50% discharge and provide a nominal 24 hours storage capacity would require, with the above example, a battery with a usable capacity of 600Wh (1200Wh to total discharge), costing in the region of £80. 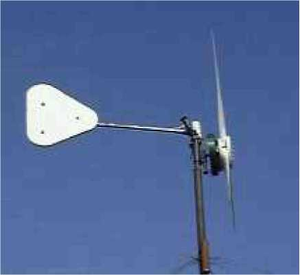 There are four main methods by which the electricity for charging may be provided:

Using a generating set imposes considerable problems as, unless power is being generated for other purposes too, the charging current, which is acceptable for small battery storage for just one or two lights is rather low for even the smallest generating sets; hence the engine needs to be run at part load which results in inefficient fuel use and is bad for the engine.

A photovoltaic system is by far the most universally applicable, as adequate sun for charging can be found in most parts of the world, and such a system, apart from occasional cleaning of the array, requires almost zero attention. The snag is that photovoltaic arrays currently cost (delivered and installed) in the region of £3-5/Wp (peak Watt). The supplier should be able to advise on the size needed (and can generally supply a battery and lighting system too). To run a 30W light for six hours would typically require, in a sunny tropical location, two nominal 40W solar modules, and would therefore cost in the region of £400. Areas with extended cloudy periods may need up to twice this capacity.

The last option is to use a small wind generator; this will generally be a cheaper option than solar power in locations having mean windspeeds greater than 4.0m/s in the least windy months. A separate technical brief gives further information on wind generators and gives a rule of thumb that the required rotor area of the wind generator for small-scale applications like lighting will be:

where v is the mean windspeed in the least windy month of the year. For the 30W lamp for six hours example, it follows that a 0.5m2 rotor wind generator will suffice at 5m/s, a 1m2 rotor is needed at 4m/s and a 2.3m2 rotor at 3m/s. The typical cost of wind generators is around £400-600/m2 for small machines (installed).

In our example of a 30W fluorescent light, which is comparable in illuminating power to a 100W tungsten filament lamp and brighter than a pressure kerosene lantern with a mantle, we can conclude that to operate it in a rural 'off-grid' location using wind or solar power, we will need the following items:

This may sound a lot to pay for a single light, but the running costs will be negligible and good quality light will be reliably available. A pressure lantern, which is much less satisfactory, would cost only about £15-30, but it would consume in the region of 5 litres of kerosene per week on the same duty cycle which would cost typically £75-150 per year. The price of solar panels and small wind generators is declining in real terms as production increases, while the price of kerosene will continue to rise. There are tens of thousands of small photovoltaic lighting systems in use in developing countries (eg 4000 in use in Mongolia in 1990) and tens of thousands of wind-powered lighting systems particularly in China.