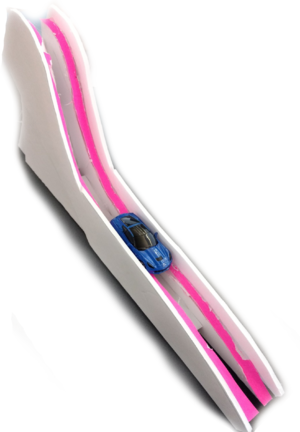 The Redwood Discovery Museum in Eureka requested a Brachistochrone exhibit from our team of engineering students at Cal Poly Humboldt. Our team successful designed, tested, and built an exhibit that demonstrate the Brachistochrone question in a fun and educating way.

The Redwood Discovery Museum, located in Eureka CA, is geared towards presenting scientific knowledge in a fun and engaging way to children of all age groups. The client required a functional demonstration of the Brachistochrone question and has contracted Team Schmotron of Cal Poly Humboldt's Engineering: Introduction to Design Fall 2017 class to design the exhibit.

The objective of this project is to design and build a functional Brachistochrone exhibit and present the concept in a fun and educational method; while maintaining a sturdy, child-safe structure that is both aesthetically pleasing and engaging.

Photos and Descriptions of the Brachistochrone Exhibit. 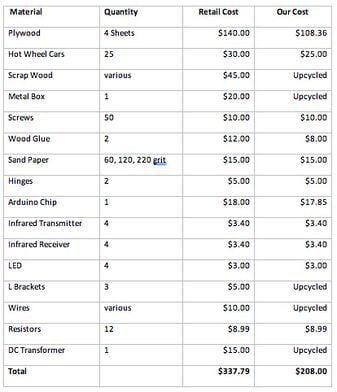 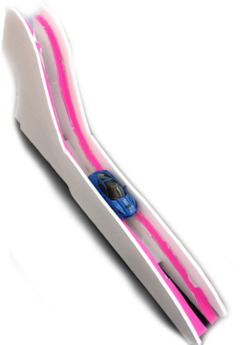 A Prototype of the Dual-Track Design

The initial track prototype, shown to the right, proved to be successful for use with balls and cars and was incorporated into the final design. The heights of the walls were slightly too tall in the prototype and were scaled down in the final design to allow balls to roll down the center gap without touching the walls.

The end gate prototype proved to be successful in accurately detecting the winning vehicle. A foamboard prototype was created to test the circuitry for the end gate. Components were then placed into the foamboard prototype, two tracks worth of circuitry was installed for testing. On the final design the circuitry is scaled up to four tracks and is able to reliably detect the winning vehicle, whether it be a car or a ball. 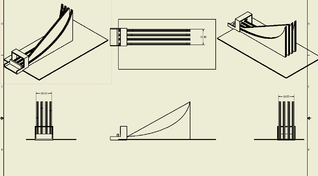 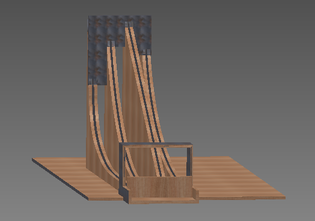 For the construction of the tracks one will need to cut all three sheets of plywood into 6 half inch 4'x4' sheets of plywood by cutting each of the 4'x8' sheets of plywood in half. One will then need to use a computer equipped with designing software such as AutoCAD or Autodesk inventor. On these programs one needs to replicate the dimensions of each 4'x4' sheet of plywood including the width. On these programs one will then sketch the desired pair of slopes similar to those of Figure 5-1 making sure that only one pair of slopes of a track is that of a cycloid. You should have a design similar to Figure 5-8. Once you have these drawn in a design program they will need to be exported as a DWG or a DXF file so that the shapes of the tracks can be cut out by a CNC machine. Once all these shapes are cut out and you have 4 pairs of identical quadrilaterals, you will want to join each of these pairs to another one with a half inch gap in-between them as shown in Figure 5-8. These four tracks will then be given walls that start after the 1.5 inch space center at the centerline. All four built tracks then will be constrained to a total width of 15". Within these bounds the tracks will be spaced evenly and then attached to the base which is another 4'x4' sheet of plywood. Wood glue and screws will need to be used as necessary. The end product of the tracks on the base will look like that of shown in Figure 5-8. 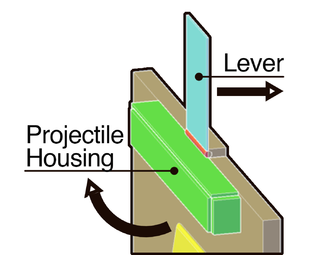 Starting mechanism can be constructed with a door hinge and some plywood. A hinge links the rotating door/projectile housing to the body of the Brachistochrone. The lever should be at least a foot in length in order to give an enough torque for an easy open. Since each path starts at a different angle the projectile housing must be measured for each individual track. If the measurements are calculated and pieces of wood cut to dimensions then they can be put together with a drill and screws easily. 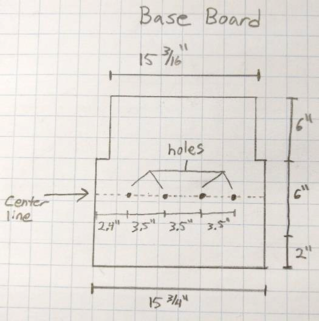 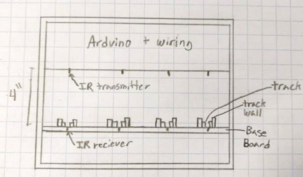 Wire up all the electrical components for the circuit based on the provided schematic seen in Figure 5-14. I highly recommend creating a test circuit first using a solderless bread board before creating the final circuit. Begin final circuit by soldering 330Ω resistors to the anode of each indicator LED, the anode is the short leg on the indicator LED, then solder ground wire to the other side of the resistor, and color-coded wire to each cathode. The ground wire will lead to the main ground on the Arduino and each cathode wire will lead to PIN10,11,12,13 on the Arduino. Next solder 220Ω resistors to the cathode of each IR LED, the cathode is the long leg on the IR LED, with ground wire soldered to the other side of the resistors. Solder color-coded wire to each cathode of the IR LED and run them to PIN6,7,8,9 on the Arduino. Solder four 330kΩ resistor to the positive lead wire from the 5v port on the Arduino unit, then solder the other side of each 330kΩ resistor to both the wire connected to the cathode of each IR Phototransistor and to each wire that connects to PIN2,3,4,5 on the Arduino. The cathode is the long leg on the IR Photo-transmitters. Make sure to implement a quick disconnect on the wires that travel between the lower base plate (for the IR Phototransistors) to the upper box that houses the Arduino in order to be able to separate the two halves for maintenance, also leave extra slack on these wires to make for easy connection/disconnection. Label each side of the quick disconnects in order to ensure proper reconnection. Power the Arduino with a AC to DC transformer rated between 7.5-12V 600mah-1000mah DC. 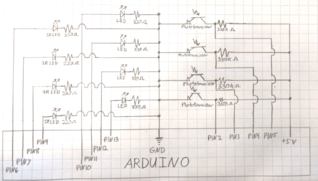 // Setup runs once, at start // Input and Output pins are set void setup(){

The Arduino chip components of the finish line are rated to last many years of constant use, if however they do require replacement the price will range depending on the component. The Arduino UNO Microcontroller can be found for $12, the LED and Photoresistors tend to be $0.25 each. Repainting the design will all depend on how much damage the exterior takes from the kids playing with the design. If the damage is minor then painting over will only take a few minutes, costing around $5. To repaint the whole design will take longer. The hinge that is attached to the starting mechanism may have to be replaced depending on the amount of use it gets. Kids could pull the handle to hard and over time may become loose and need replacing. This is a simple replacement, and will only take about 5 minutes with a drill and cost around $5.00. Cleaning may need to be done depending on how much debris gets on the tracks, making it difficult for the vehicles to go down the track. A quick sweep or dusting will suffice and only take about 5 minutes. Hot wheel cars will need to be replaced as they are lost, stolen, or broken. These can easily be ordered online for nearly a dollar per car. Golf balls depending on what kind you buy can vary in price, but the cheapest can be found online for about $0.50 each.

This is when to maintain what.

We hope that children will be fascinated by the Brachistochrone and encourage them to learn about physics and mathematics. Also we would hope that the educational properties can be used by educators in the surrounding area.

The Arduino controlled finish line placement mechanism can be upgraded to monitor and display the descent time of the vehicles. The indicator LED's need to be replaced with digital displays. A closed circuit needs to be added to the Arduino that is connected to the start mechanism. When the start mechanism is raised it will break the circuit. The Arduino is programed to begin a timer when it detects the broken circuit, the timer will stop when the Arduino senses a vehicle cross the infrared beam. The time is then displayed on the digital display. The Arduino code will need to be updated for this feature.