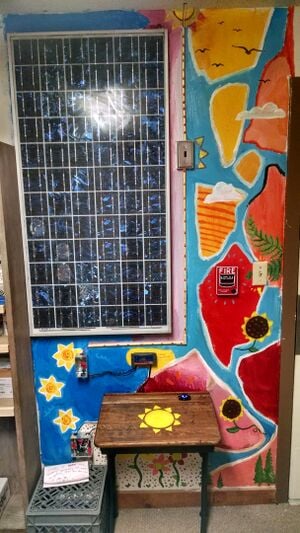 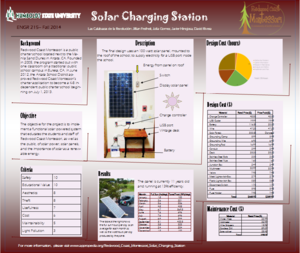 The Solar Charging Station is a solar powered system that charges cell phones and other small electronics via a USB port.The purpose for the charging station is to educate the students and staff of Redwood Coast Montessori of solar power. It was designed in the Cal Poly Humboldt Engineering 215 Fall 2014 by the team Las Calabasas De La Revolucion.The team is comprised of Jillian Freiheit, Julia Gomez, Javier Hinojosa, and David Rivera.

The client for our project is Redwood Coast Montessori (RCM). It is a public charter school located next to the Manilla Sand Dunes in Arcata, CA. Founded in 2005, the program started out with one classroom on a traditional public school campus in Eureka, CA. In June 2012, the Arcata School District approved Redwood Coast Montessori's charter application to become a K-8 independent public charter school beginning on July 1, 2013. The Montessori style of teaching acknowledges that children in early childhood need to develop their cognitive abilities through experiences with their senses and different materials. As they grow, Montessori students at an elementary age apply what they have learned to real world experiences.

Redwood Coast Montessori has two 100 watt solar panels but has no use for them.

The objective is to implement a functional solar powered system that educates the students and staff of Redwood Coast Montessori, as well as the public, of solar power, solar panels, and the importance of solar as a renewable energy.

The final project is a solar-powered charging system for powering small devices using a USB socket (2x 5V/2/1A Waytek A13-208[1]). Energy is collected by a 100 watt solar panel mounted to the roof of the school.
The energy collected by the panel is directed inside the copy room to a charge controller, which regulates the power flow, and then sent to a 12 volt, 40 amp hour battery to be stored for later use. The battery connects to a USB port mounted to a vintage school desk which was purchased from a local community member. This USB outlet is to be used by the students, staff, and community.
Alongside the outlet, there is a mural, an educational display, and a display solar panel. The mural is an artistic depiction of solar power painted onto the wall of the copy room. The educational display is a brief description of the design and a simple explanation of solar power systems. The display solar panel is identical to the panel on the roof, and functions as a back-up panel as well as an educating device. 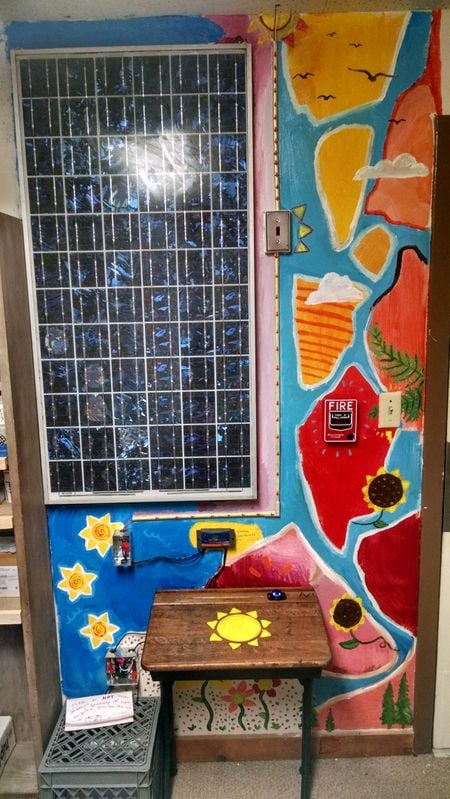 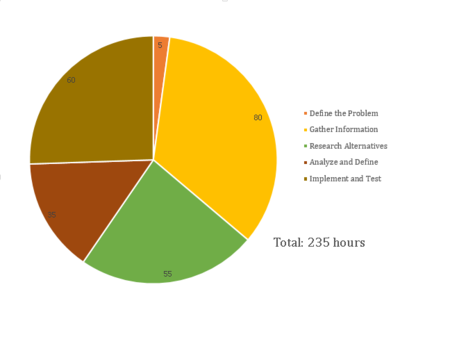 Once the installation of the solar PV system at Redwood Coast Montessori was complete, the team was successfully able to verify the working condition of the system. After turning on both the breakers, the final test was to turn on the loads, which successfully worked with both charging ports occupied.

How to use Solar Charging Station[edit | edit source]

How to maintain[edit | edit source]

In order to keep the system operating and running efficiently, periodically check the system. The periodic checks involve inspecting the wires for all aspects of the system, and monitoring the solar charge controller. The panels must also be cleaned once a month, or after a storm in order to maintain panel efficiency. The batteries must also be replaced after their lifespan has ended.

Below are details of some problems that may arise in the photovoltaic system and solutions for these problems:

The top two criteria for this project are safety and educational value. Being equipped with a grounding rod, multiple fuses, and a charge controller, this project is safe for users from children to adults. Located within the charge controller is a watt meter. From this meter, students will be taking daily measurements of the amount of energy being produced by the system. To bring even more educational value to the project, it is equipped with multiple educational plaques which: explain how solar works, briefly describe how each component contributes to the system and explain the advantages of solar as a renewable energy. Not only can this project be used by the students and staff of Redwood Coast Montessori as well as the community, it is an effective learning tool that makes all of our futures a brighter one.