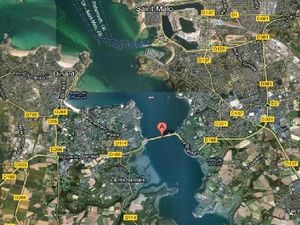 The Rance Tidal Power Station is the second largest tidal power station in the world; it is located in Brittany, France. It was constructed between 1961 and 1966. The facility is a bridge constructed across a bay. Like any large-scale hydrological alteration, tidal power stations have economic and social impacts. In the past, the La Rance plant provided some unique regional development benefits because it was wide enough to support a road that connected two previously isolated communities, and it allowed further development of the local distribution network for raw materials and finished goods. Beyond the power generation of the land in which the plant was built on, was used to join communities across a bay, that were otherwise isolated from each other. The facility has several components including a barrage and power plant portion, it utilizes tidal energy, by damming off the basin. It is part of France's highway network with between 30,000 and 60,000 vehicles per day crossing it. The site located near St. Malo, France was chosen for its shape and due to the fact that is has the highest tidal range in France. La Rance Tidal Power Station is a large scale power facility that may not fit the criteria for "appropriate technology" in comparison to present technology available. However, a facility like this one may one day provide inspiration in the future as a facility with less environmental impact. Taking into consideration that even though the project was extremely expensive at the time, it quickly paid for itself with an electricity cost of 1.8 cents per kWh, compared to a 2.5 cents per kWh for nuclear power generation.[1] 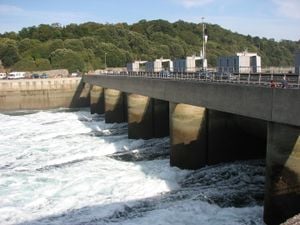 The challenge in the construction was designing turbines that would be able to generate power with tidal cycles, special turbines had to be designed to utilize a double cycle of ebbs and direct pumping(where water is allowed to flow from basin to the sea). Those 2 cycles alone account for 80% of total generation; with the high tides accounting for the rest. Turbines also had to be resistant to corrosion due to the sea environment. In order to combat corrosion both the gates and turbines had cathodic protection installed using Imposed Current Cathodic Protection. 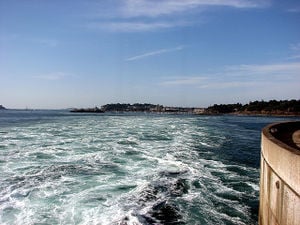 Fig 3: View of The Bridge and Generator

The most significant effects of the project occurred during construction where heavy sedimentation occurred. The marine fauna population was decimated and fish populations suffered with the salinity fluctuations. After the intial environmental shock and with the project transforming the estuary into "a sea" the marine environment rebounded. Experts disagree about sedimentation effects of the project, with areas of the estuary having higher than normal sediments and a decreased tidal range. The increased amounts of sediments have caused a significant decimation of benthic organism populations.