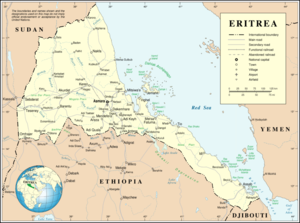 EritreaW has been, (and to a lesser extent, continues to be), home to both domestic and foreign conflict. These conflicts have been the primary focus of the government and citizens, until recently, as the government has begun to recognize the great importance of sustainable development for the country's success as an actor in the international community. [1]

In 1996, the Eritrean government joined the UN Convention of Biological Diversity, and in 1998, began working with the Global Environment Facility, a partnership fund that connects countries with international institutions that support sustainable development.

Taken from UNDP Eritrea's information site, the four main objectives of the project are: 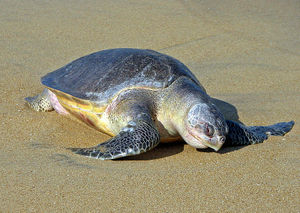 As part of ECMIB, a National Action Plan for Marine Turtles in Eritrea is being developed. This focuses on surveying and protecting all critical turtle habitats on the Eritrean coast, which includes policies to prevent habitat disturbance, incidental net capture, illegal hunting, and pollution. [3]

Eritrea occupies part of the south western region of the Red Sea, rich in regional biodiversity. In May 2005, while surveying the Eritrean coastline for ECMIB's initial turtle studies, scientists reported the first documentation of a nesting attempt by the olive ridley turtle. It was the first observation of the species nesting on the coast of the Red Sea. [4]

Poverty is prevalent in Eritrea, and many citizens rely on subsistence farming for food and income. The development of fisheries has helped expunge extreme poverty on the coast, and because of ECMIB, these fisheries are monitored to ensure responsible and sustainable practices.

Wind energy has proven to be a major contributing factor to the successful storing of fish harvested on the coast. Abi Gebremedhin, head of Eritrea's renewable energy department, claimed in 2011 that wind power accounts for 20% of the port city of Assab's total energy consumption. This means cheap fuel, which fisherman can use for transportation to south Eritrea, where marine life is more abundant. This energy can also be used to create ice, which fisherman use to preserve the freshness of the fish during transport back home, or to market. [5]

In 2007, the World Bank declared Eritrea as having the lowest food security worldwide, but because of technological development and government subsidies, Eritrea's economy continues to advance, and quality of life continues to raise. [6]

ECMIB, considered successful, was concluded in December of 2007. [7]

Three MPA's have been established, and Eritrea's Ministry of Marine Resources, who implemented the project, continues to maintain a full- and part-time staff to monitor the coastline. [8]