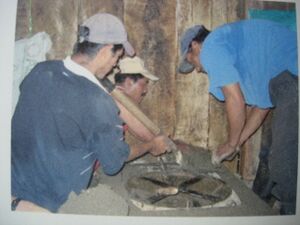 The mission of Pronatura Mexico is the conservation of flora, fauna and priority ecosystems, while promoting society's development in harmony with nature. Pronatura México, A.C. was first created in 1981 and in the following years, regional and state representative offices were constituted. Together, they integrate Pronatura's National System, with strategies and actions oriented towards achieving the conservation and sustainable development of priority regions and sites for biodiversity preservation in the country."

The design was transferred to Pronatura by the Mexican Institute of Water Technology (IMTA) http://www.imta.mx/ This stove consists of a high efficiency combustion chamber with a plancha style cooking surface. The design was transferred to Pronatura in June of 2004. The original model was built with an adobe mix that was customized to each region's available material resources. Typical mix proportions are: 5 buckets of sand: 3buckets of earth: 0.5 buckets of cement. Molds were originally used to form a cone shaped primary combustion chamber as specified by the IMTA design. Pronatura is now abandoned the adobe mold method and is experimenting with bricks as the primary building material in an effort to increase the durability and lifetime of the stove. This modification increased the cost of the stove by 41% from 56 USD to 79 USD.

Note: this is an estimate provided by the coordinator of the program and is not substantiated by an independent analysis.

Page data
Retrieved from "https://www.appropedia.org/w/index.php?title=Pronatura_Chiapas_Stove_Dissemination_Program&oldid=664262"
Cookies help us deliver our services. By using our services, you agree to our use of cookies.
Categories:
About Appropedia · Policies · Contact · Content is available under CC-BY-SA-4.0 unless otherwise noted.