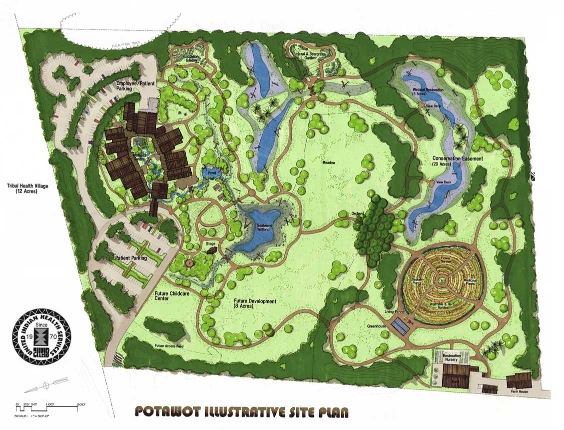 The Potawot Health Village is a branch of the United Indian Health Services whose services combine Western medicine and traditional Native American methods of promoting wellness.[1] The designers who worked on designing the grounds knew that nature has sacred value within the Native American community. The set up of this design can be seen in Figure 1. They sought to create a space which honored tradition and would help their community to stay healthy, both physically and emotionally.[2] One aspect of this idea was recreating the original habitats and biomes that once dominated the area, before people of European descent settled on the land.[2]

History of the Area[edit | edit source]

The Northern California coast, including the area around Humboldt Bay, has been the home of the Wiyot people for thousands of years.[3][4] Other tribes native to the area are the Yurok, Tolowa, and Karuk. The land around them, traditionally a place of forests, seasonal wetlands, and heavy salmon runs, profoundly influenced their lives.[3][4]

However, as people of European descent moved into the region, the Wiyot were pushed off their native lands, which were reshaped to be more suitable for "modern" farming and development methods.[4] On the Potawot land specifically, forests were cut down, native grasses were replaced by faster growing ones, and the seasonal wetlands were destroyed to make the land more conducive towards farming and grazing.[2]

In 1996, the United Indian Health Services began working with the City of Arcata and the Planning Commission to get their newly purchased land, which was zoned as "Agricultural Exclusive" to be approved for a Planned Development Permit and a General Plan & Zoning Map Amendment. A year later, their plans for the Health Village at Potawot were finally approved.[5]

As the owners of Potawot researched the land, they found that within the vicinity of the site were four historical Wiyot village locations as well as a burial ground for the victims of the 1860 Indian Island Massacre.[5] However, the land has been changed so much over the years that it is now impossible to find the original locations.[5] They also found the fossilized remains of spruce cones and other plants which helped determine what species were native to the immediate area.[2] 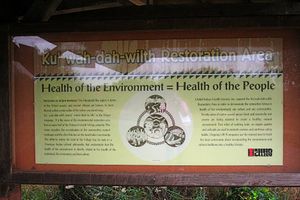 The Potawot grounds are known as the Ku'wah-dah-wilth Restoration Area (Fig. 2), which means "comes back to life" in the Wiyot language.[6] It is meant to reinforce the idea of the lands revitalization and the renewal of the natural resources that once existed there. Work on the site has included planting native species of trees and shrubs, restoring the grasses and wetland areas, and creating a comfortable space for the clients of the United Indian Health Services. This space is also considered to aid in the healing of mind, body, and spirit.[6]

Support for the Project[edit | edit source]

According to those who work for the Potawot Health Village, the community's reaction to the forest restoration efforts has been positive.[2] Financing was found in grants from the Natural Resources Conservation Service, a branch of the United States Department of Agriculture, as well as through a California Resource Conservation District. These grants helped to offset the initial cost of the project.[2]

Local tribes, notably the Yurok, as well as crews of community members have also helped by collecting trees from their personal properties that would otherwise have been removed and destroyed and replanting them at Potawot. Six Rivers National Forest also donates plants that are in the path of new development or road decommissioning. Potawot is given permission to collect and replant the trees that would have been destroyed otherwise. Community volunteers as well as AmeriCorps members also assisted in planting new trees.[2]

The original soil, already heavy in clay (which prevents proper drainage) had been badly damaged by years of grazing induced monoculture. Native plants brought in by community members helped to reintroduce endomycorrhizae, fungi which encourage root development, as well as other native microorganisms which enrich the soil.[2] Store bought packets of endomycorrhizae helped supplement the ones carried in by native plants. They also added redwood conditioner which makes for a loamier soil, marked by higher concentrations of silt and sand and fairly little clay, and better drainage. In addition, fertilizer and mulch gave the trees an extra boost after first planting.[2]

All of the trees and shrubs on the Potawot property were gathered from community donors, local nurseries, Six Rivers National Forest, and through Potawot's own propagation in their native species nursery.[2]

The trees and shrubs were planted in clusters around the property and in combinations in which they are thought to grow in nature (Fig. 3). The clusters make them easier for the maintenance staff to care for and are separated by meadows (Fig. 3). Trees were also specifically planted around the edges of the Potawot property.[2] On the south side, redwoods were planted to block noise pollution from the nearby freeway (Fig. 4). Although it is unlikely that they are native to the Potawot/Arcata Bottoms area they are considered culturally significant to the local tribes and so were included within the design. On the north side, more wind tolerant species of trees were planted, including spruce and shore pine, to help block the North winds and protect the garden. Near the storm water treatment ponds, designers did not plant trees in an effort to discourage birds of prey from inhabiting the wetland areas, therefore ensuring the presence of wetland birds (Fig. 5).[2]

Although the people at Potawot have gathered the support of the community, there have been some problems with the topography of the area and the species which had been introduced. At the beginning, the entire property had to be reshaped to account for the seasonal wetlands and the habitats that originally existed there.[2] Also, the damage inflicted on the soil after about a hundred years of near monoculture was severe. The ground had become choked with clay, had lost many of the naturally occurring microorganisms and fungi, and the pH balance was not conducive for native species. Plant species present when Potawot first began restoration also posed a problem. The introduced weeds and grasses were so aggressive that they would choke out the young trees, which had to compete for water and sun.[2]

The Potawot restoration efforts, as part of their attempt to create a natural space, do not perform any supplemental watering and have no irrigation system. Due to this, some trees and shrubs have died in the past because of too little water. However, planting in fall during the rainier time of the year helps support young trees.[2]

Since restoration efforts began, around 10 acres of forested area have been restored and there have been changes in the lands around Potawot. Noise pollution is already beginning to diminish and the increased number of trees and shrubs has brought new birds, mammals, and other creatures to the area.[2] Some of these changes can be seen in Figures 6 through 8.

As the trees grow larger they have begun to shade out certain grasses, most notably the invasive grasses that workers at Potawot are trying to eradicate. In addition, the trees shade is making way for understory plants, such as ferns, to grow.[2]

Currently the forest restoration efforts at Potawot are minimal as the workers let the trees mature and grow into their surroundings and provide the areas for more shade loving undergrowth.[2]

There is some continued maintenance, such as the replacing of dead trees, but for the most part they are left alone. Grounds workers and volunteers are also beginning to plant more trees along the North end of the site in order to provide more wind and noise protection.[2]

In addition, Potawot has been making outreach efforts regarding Sudden Oak Death. Although, Potawot and Humboldt County have been spared this danger so far, they have been working to educate others and prevent the spread of the disease into their local areas.[2]