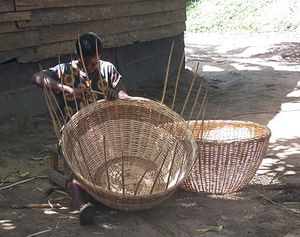 Traditional woven baskets are essential to Native American culture. Baskets are used for harvesting, storage, and even as cradles for children. Throughout the basket weaving process (Figure 1), the artists handle the plants and materials in many stages. The basket-makers gather the plants, prepare the dies from flowers, and often peel the bark with their teeth.

While making baskets, the artists moisten the ends of sticks with their tongues, or hold materials in their mouths. When the materials used have been sprayed with toxic pesticides, the artists are in danger of contact with and even ingestion of these harmful chemicals. This kind of pesticide ingestion can increase the likelihood of developing cancer on the lips and mouth. [2]

The grasses and saplings used for basket making are often harvested along roadsides and on public lands like National Forests. Herbicides like atrazine, glyphosate and 2,4-D [2] are commonly sprayed on public lands where basket makers gather their materials. The chemical 2,4-D was a main ingredient in the cancerous herbicide Agent Orange used in Vietnam, while glyphosate is commonly sold under the brand name Roundup. These herbicides are often sprayed along roadsides across the country to control invasive weeds like star-thistles and Himalayan Blackberries, but often contaminate the native plants that are essential to Native American culture.

Native tribes in Humboldt County such as the Wiyot, Yurok, and Hoopa have all been affected by herbicide spraying on public lands. The Hoopa banned pesticide use on their reservation in 1978 and many other tribes have followed suit. 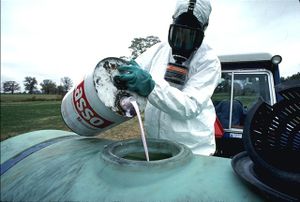 Exposure to various pesticides and herbicides can cause allergic reactions, rashes, swelling of skin, nausea, dizziness, and difficulty breathing among many other ailments. Sometimes the symptoms are similar to the flu, so they often go unreported. [4] The common herbicide 2,4-D may cause prostate cancer and other reproductive issues. Other pesticides like Bendiocarb, which is often used on golf courses, can cause infertility and is poisonous to unborn children and babies. [5] These chemicals require the handlers to wear protective suits when mixing them (Figure 2). Organic Pesticides can usually be used as alternatives to harmful pesticides.

Along the lower Klamath River, timber companies have been using herbicides to eliminate weeds during reforestation for many years. The Yurok downstream of this water shed have reported sicknesses in birds and honeybees, as well as tumors in deer meat. They have also reported high rates of cancer and respiratory diseases. 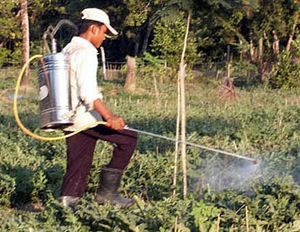 Roadside spraying of herbicides (Figure 3) was once common in Humboldt County, but it is now banned thanks to the California Basket-weavers Association (CIBA)[2]. Herbicides were sprayed by Caltrans to eliminate weeds along highways and by the Forest Service in National Forests. Protests against spraying began in 1972, and after years of raising awareness and lobbying, Caltrans can no longer spray along roadsides in most Northern California counties. It is up to individual counties whether spraying will be allowed or not. Humboldt, Lake, Del Norte, and Mendocino counties have banned roadside herbicide use so far. Instead they mow the weeds and use manual labor to remove certain invasive plants. Manual trimming is more costly due to increased man power and time. Herbicide sprays can cost from 14 to 75 dollars per gallon, but only require one worker to do the spraying. [7]

CIBA is currently working to eliminate herbicide use in National Forests. Several parks have stopped spraying chemicals, but others continue to do so against the wishes of the native people. Other organizations involved in the protest against herbicides include the Sierra Club, the Forest Issues Group, and the Sierra Foothills Audubon Society [8].

At the Potawot Indian Health Center, manual weed thinning and seasonal burning are used to keep weeds and invasive species out of the area. [4] Potawot also plants native species to slow the growth of weeds.

The Potawot Wellness Garden exhibits many native basket materials like spruce, alder, willow, beargrass, and wild grape. The plants are grown organically without any insecticides or poisons. The one acre basket weaving garden was partially funded by the EPA Pesticide Program to address local pesticide issues. The area is used as an educational demonstration about traditional basket weaving and its health impacts.[4]

Page data
Retrieved from "https://www.appropedia.org/w/index.php?title=Potawot_basket_weaving_and_pesticides&oldid=621980"
Cookies help us deliver our services. By using our services, you agree to our use of cookies.
Categories:
Maintenance categories:
Comments
Privacy policy · About Appropedia · Disclaimers · Mobile view · Content is available under CC-BY-SA-4.0 unless otherwise noted.
</html