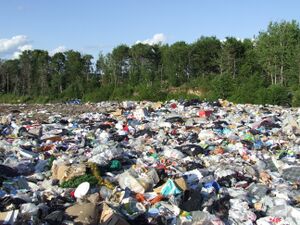 PetroleumW based plasticsW and polymersW have dominated many material processes over the past decade. In recent years the concern with petroleum depletion as well as the environmental impact of such materials has led to an interest in alternative, environmentally-friendly materials. Bio-based polymers have proven to be increasingly popular alternatives in recent years[1].

Polyvinyl ChlorideW(PVC) is a very common thermoplastic polymer utilized in a wide variety of applications such as building materials, pipes and electric wire insulation. There is concern over its wide use as it has a great environmental impact and contains both toxins and carcinogens. Additives are a concern in particular in products where flexibility is a desired feature of the PVC product. In order to make the material flexible phthalate plasticizers are added, most of which are toxic, and have been banned in several countries. Complete elimination of phthalate plasticizers however has proven to be difficult due to the necessity for flexible plastics. There is particular concern in applications where burning or exposure to sunshine occurs as this often causes harmful gas emissions such as carbon monoxide, carbon dioxide, hydrogen chloride and occasionally phosphene gas, all of which are dangerous to humans and the environment[2].

Polymer environmentally friendly resin is becoming a popular environmentally friendly, nontoxic and carcinogen free alternative to PVC. Patented in 2003, Polymer Environmentally-Friendly Resin is a fairly new technology is thus not yet widely used. One area in which PER has become increasingly popular is that of the yoga community and yoga mat production as many yogis are very environmentally conscious. PER has great potential for replacement of PVC in a wide range of applications however.

Why PER? Environmental and Health impacts of PVC[edit | edit source]

PVC has been found to contain a number of unfriendly chemicals and additives. The manufacturing process alone releases 35 lb/ton of particulate emissions and 17 lb/ton of gas emissions[3]. These are a risk to both human health and the environment.

The most common toxins in PVCs are phthalate plasticizersW and leadW. Phthalate plasticizers have risen a large amount of concern as DEHPW and DINP, the most common phthalates in PVC, have been listed as probable carcinogens by the U.S. Environmental Protection Agency. Studies on animals indicate that the effects of these phthalates may range from gastrointestinal distress to birth defects to various cancers[4].

Lead can be found in large quantities in PVC and during degradation due to heat and sun exposure, it can be released into the air as dust. Lead has a large range of negative health effects with any sort of human interaction and tends to target the nervous systemW.[5]

Finally, dioxin is a byproduct of the manufacturing process of PVC as well as its combustion. It is a Class 1 carcinogen according to the U.S. Environmental Protection Agency and may cause reproductive, developmental, hormone or immune system problems[6].

Vinyl chlorideW, a known carcinogen, is the main chemical used to make PVC. Long term effects have been observed in workers of PVC plants as well as in residents surrounding PVC plants. Interaction with PVC is very common however, among most people as many food packages, children's toys, flooring, wallpaper, piping and numerous other applications utilize the material. This presents concern for long term health effects proven to exists from extensive interaction with this known carcinogen.[7]

DioxinW is a byproduct of the manufacturing process of PVC as well as its combustion. It is a Class 1 carcinogen according to the U.S. Environmental Protection Agency and may cause reproductive, developmental, hormone or immune system problems[8].

PVC's provide more negative environmental impacts for their worth when recycling. Due to the large quantities of additives in PVC, they can be cycled a limited number of times and must be sorted out of the recycling process in most cases. They also emit harmful gases including carbon monoxideW, carbon dioxideW and hydrogen chlorideW when melted down and thus extensive harm is caused by their recycling. Due to these challenges only approximately 6.9% of plastics are recycled in the USA[9]. PVC's are also completely non biodegradable and therefore their environmental impact is negative weather they are being recycled or not.[10]

PER and PVC production[edit | edit source] 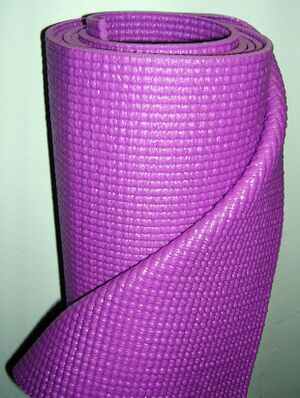 In producing PER, initially a mixture of acetic tri butyl citrate and liquid-phased stabilizer is made. A second mixture of powder-like poly vinyl chloride, filling agent, light stabilizer uvasorb and fireproof agent is prepared, and then the two complete mixtures are combined. Once combined, the mixture becomes a cream-like finished product which is then baked at 170°C and becomes usable polymer environmental-friendly resin.[12]

PVC production has become increasingly efficient over recent years as its usage has increased. The efficiency in this process and the desire for simplicity in manufacturing yields a resistance to take extra steps towards increasing efficiency in a material's life cycle. Due to this the three extra processing steps and additional materials to turn conventional PVC into PER appears unappealing. These three final steps are not excessive in their energy or material requirements but they do go above and beyond the minimum requirements to fulfill usage needs.

The environmental benefits of using PER over PVC are enormous. Where emissions from PVC production are numerous, PER has little to no harmful emissions even when burned(excluding CO2 which is unavoidable in combustion). PER also does not have any slow emission of toxins and carcinogens, and it is more capable of several recycling cycles. Given that there are fewer harmful additives in PER than PVC it is recyclable without risk of degradation of the recyclate after several cycles. Due to it's unique composition, recycling PER does not produce the same harmful gases as those produced from recycling PVC.

It is notable that PER does not require phthalate plasticizers in order to achieve the flexibility which is required in many current applications of PVC. Given this fact, it can be seen that the carcinogenic effects are minimized in this way from exposure to carcinogens. Although the filling agents and light stabilizers are not without their threats(occasionally toxic) they remain exponentially more healthy and environmentally friendly as there are fewer in PER than PVC.[14]

Given all of these benefits, PER is also successful in fulfilling the desirable qualities of PVC. PER is non-slip, water proof and sun protective just as PVC is.[12]These qualities allow PER to be a suitable and environmentally friendly replacement for most PVC products.

Increased interest has come from reinforcing bio-material polymers with environmentally friendly fibres.[15] This method has proven to increase strength while maintaining the materials environmental benefits. Natural fibers, such as KenafW[16] and JuteW[17] are embedded in a bio-based polymer which has been proven to increase tensile strength in these materials. Bio- based polymers such as those made from soy show great promise in the environmentally friendly polymer industry. The properties of the bio-based polymers alone do not provide enough strength to be useful in a wide variety of applications. Embedded fibers have increased their usefulness in a large number of applications. A direct link between the cross linking of fibers within the material and material strength has been observed.

PERs are a midpoint between bio-composites and PVC that are far more environmentally friendly than the latter, but less so than the former. Embedded fibers show a great potential for use in PER where increased strength is required.

While PER the production process is no more efficient in material or energy use than PVC, it reigns over in its recyclability and end of life. These two factors contribute to PERs life cycle efficiency as they can be reused more easily than PVC. The embodied energy in PVC products and their material processing is approximately 19000 Btu/lb produced.[3] This does not include the energy requirements for recycling this less re-processable plastic nor the energy required for incineration, which is the only method by which some of this energy may be retrieved. 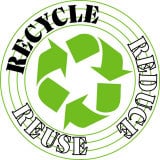 Minimizing raw material use through more recyclable options may be the best and only option that leads to an environmentally friendly polymer industry. The recyclability of PER is the major contributing factor pushing industry towards its use over PVC. PVC is unfavorable as a recyclable material both in the energy required for the process and that the market price for recycled PVC is considerably less than virgin PVC. This makes virgin PVC more favorable to use as one of the contributing factors to PVC popularity is its low cost. Where recycling of PVC does occur, the human labor required to sort it from other plastics is large. Many recycling plants do not want to recycle PVC as its high additive content compromises the quality of the recycled material. PVC can become useless after as few as 2 cycles because the additives comprise up to 60% of its content[18]

Should a switch to PER occur, as a far more recyclable material it can be done many more times before the additive content becomes too large for the material to be useful. The option of PERs as a recyclable polymer in replacement of PVC appears quite appealing for these reasons. The use of PER as an alternative to PVC has environmental benefits as well as minimizing the need for new materials because recycling will become a viable option again.[19]

While PVC incineration may be a more economically viable method of dealing with PVC over switching to environmentally friendly materials, the environmental footprint of this option seems far too large to justify not using alternate options. PVCs may be recycled only a limited number of times and when they can no longer be recycled they will remain in landfills as they do not biodegrade. This issue is exceptionally important to address with PVCs as the leaching of toxins and carcinogens may pose a risk to water quality, air quality and ultimately cause a large amount of human and environmental damage.

Incineration emits a large number of greenhouse and harmful gasses and leaves a large amount of solid waste such as slag, ash and various types of residues.[19]This option may provide some energy, however it is minimal in comparison to the embodied energy in the plastic.

PERs provide an option for end of life that leave little environmental impact. Although they also contribute to landfill space, leaching out of harmful chemicals is not an issue and incineration cause far fewer emissions. PERs also have a much longer life cycle and therefore fewer PER products will reach their end of life in a given amount of time than those made from PVC.

Suggestions: The future of PER and PER composite materials[edit | edit source]

The promise of bio-composites and PER as PVC alternatives has indicated a possibility for a wide range of application for both material options. The possibility of utilizing the bio-composite technology in PER to produce higher strength environmentally friendly polymers has not yet been widely explored but may show great promise. Where addition of natural fibers to PVC for increased strength seemed futile as the PVC itself was so toxic, PER provides a far more appropriate material to begin researching the benefits of a bio fiber matrix.[15]

A complete switch from PVC to PER is not completely feasible currently due to the higher cost of production. There is hope however that while environmental concern increases over the coming years a switch to the more environmentally friendly polymer may provide opportunity for reduction in waste and harmful gas emissions.

What is the percent PVC in PER and what do the energy values look like for common and ideal recycling rates. [expansion needed]

Page data
Retrieved from "https://www.appropedia.org/w/index.php?title=Polymer_environmental-friendly_resin&oldid=635124"
Cookies help us deliver our services. By using our services, you agree to our use of cookies.
Categories:
Maintenance categories:
Comments
Privacy policy · About Appropedia · Disclaimers · Mobile view · Content is available under CC-BY-SA-4.0 unless otherwise noted.
</html