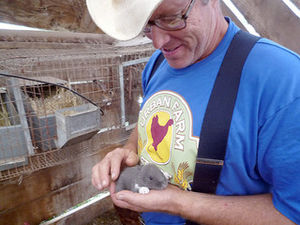 Polyface Farm is a sustainable farm located in Swoope, Virginia which spans across 100 acres of pasture and includes 450 acres of forest. It is run primarily by Joel Salatin and his family, all of whom reject conventional methods of farming. Instead, they favor a symbiotic system that produces exceptional results without the negative externalities associated with common farming practices[1].

Joel Salatin is the man behind Polyface Farm. He attributes his farming techniques partially to his Christian background. "He sees it as his responsibility to honor the animals as creatures that reflect God’s creative and abiding love, and believes his method is to honor that of God”[2]. Coming from a long line of farmers, Salatin decided to start the farm on property that his parents had purchased in 1961 and follow in his predecessors' footsteps by running a farm based on organic and non-traditional methods. "He's not going back to the old model. There's nothing in county extension or old-fashioned ag science that really informs him. He is just looking totally afresh at how to maximize production in an integrated system on a holistic farm. He's just totally innovative" [3]. Joel is also a firm believer in traditional methods of trade, those done locally and in person. This way, both the buyer and seller can be confident while trading face to face. Salatin says, “Don’t you find it odd that people will put more work into choosing their mechanic or house contractor than they will into choosing the person who grows their food?”[4] He studied at the Bob Jones University where he received a BA in English. Salatin has also written a number of books about farming and the logistics behind starting and running a successful farm. Currently, Salatin works on his farm and gives lectures to college students and environmentalist groups about Polyface Farm. 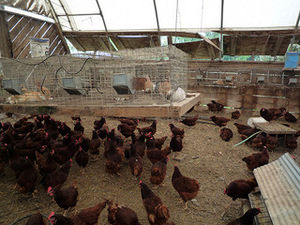 Polyface Farm raises chickens (including broilers, stewing hens, and freedom rangers), turkeys, eggs, cattle, pigs, and rabbits, all of which are pastured and available for direct purchase to consumers. Additionally, a limited supply of vegetables and herbs are available for purchase. These items are available only to those within approximately half a day’s drive from the farm, in accordance with the Salatin’s firm belief in a maintaining a “local” food system[1].

Polyface Farm is technically not organic, although its practices are by far more sustainable than most large scale organic farms. Salatin rejects federal standards for organic farming and refers to his practices as “beyond organic.” This means that rather than conforming to less sustainable practices that meet the legal definition of "organic", Salatin works diligently to maintain a local food system that resembles natural processes.

The cows and chickens are rotated around the pasture in a manner that mimics patterns found in nature. This pattern is as follows: Cows eat the grass growing in a particular section of the pasture (their diet is solely grass; no corn is used to supplement their diet) for one day and are then moved on to another section. Moving the cows is done by fencing off different sections of the pasture each day. By practicing this method of rotational grazing, the cows have access to fresh grass each day and the pastures do not become overgrazed. Chickens are then put in pastures previously occupied by cows following a three day grace period. Broilers are kept in pens while laying hens are transported in Salatin’s chicken tractor, known as the Eggmobile. The chickens’ diet is supplemented by corn, soybeans, and kelp, but Salatin estimates that 20% of their diet consists of grass and the insects they peck from it. The chickens also act as a natural pesticide by eating the insect larvae and parasites found in the cattle’s droppings thereby eliminating infestation and disease. The chicken's droppings are rich in nitrogen, which enriches the soil and eliminates the need for added fertilizers.

Compost is a key component at Polyface Farm. During the winter the cows spend most of the time in a barn. Their manure is allowed to accumulate and is layered with straw, woodchips and corn. The decomposing layers generate heat, warming the barn and reducing the cows’ feed requirements. As the layers decompose, the added corn ferments. Come spring, the cows are brought back to the pasture and pigs are brought to the barn. Using their sense of smell, they search for corn, turning and aerating the compost as they do. The decomposition becomes aerobic, quickly speeding and heating up the process, which kills any pathogens. Different pigs are cycled in and used for this process and after a few weeks the compost is ready to use. This compost is spread throughout the pastures.[1] 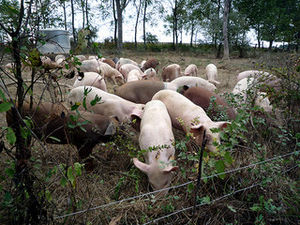 Following the success of Michael Pollan's book The Omnivore's Dilemma public interest in Polyface farms skyrocketed. This was made evident by the sheer volume of people requesting tours of the farm. The farm's "open door policy" allows guests to freely tour the farm during business hours. Guided tours are also available: "Lunatic tours" are offered twice a month on specified dates (between the spring and fall) for the first 100 people who reserve a spot. The attractions included vary depending on the time of year but can include: hay rides, pastured broilers, pigaerator/pastured pork, salad bar beef, egg-mobile, Raken house, pastured rabbits in hare pen, turkeys in the Gobbledy-Go and the Brooder[5].

Polyface farm has also been featured in the documentaries Food Inc. and Fresh.