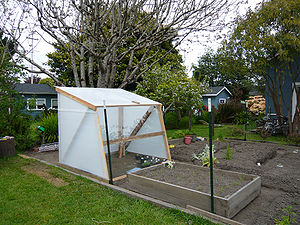 This greenhouse design project is geared for use in the Northern California coastal region, which is known for its cool, wet winters.[1] The combination of frequent rainfall (between 5-7 inches of rainfall per month from November through March), sparse sunlight, and cool temperatures (average daily min around 40F to average daily max around 55F)[2] can make local gardening[4] and agriculture difficult. The constant excess moisture and lack of drying warmth lead to a host of problems including soil compaction, mold, and other problems which affect both plants as well as composting microbes and earthworms.[3]

The purpose of the project is to overcome some of these constraints. The greenhouse design must effectively raise the minimum daily temperature relative to the outside air and effectively protect the plants, compost, and vermiculture bin from the elements.[4][5][6] Ideally, construction will be complete before winter ends (before the end of March, according to typical Arcata, CA climatology) so that weather conditions will be at their worst and the degree of success will be easiest to measure. Temperature readings will be taken at least twice daily, once around sunrise at T-min, and another late in the afternoon, typically T-max. A series of warm, generally summer-only plants will be grown as early on as possible in order to gauge practical as well as qualitative success.

The broad-scale goal is to demonstrate an appropriate means of increasing food production during the winter on a small-scale, supporting both sustainable living as well as community agriculture.

Combining a greenhouse with a composting unit has two added benefits: heat and "CO2 enrichment". In commercial greenhouse operations, CO2 enrichment is used extensively to boost yields. CO2 concentrations are raised to 1000-1500 ppm, which can double yields as long as other variables (light, water, moisture, temperature) are not constraints.[7] The most widely used carbon source is unfortunately a fossil fuel, natural gas. Composting inside the greenhouse creates the same effect, but in a more climate-friendly way.

The concept can be further extended by the addition of biochar to vermicompost. Applied in moderate amounts, biochar has no adverse effects on worms and, according so some observers, can speed up the composting process. It tends to prevent anaerobic conditions in compost[5].

Maximum and minimum temperatures over a 10-day period, including cloudy and sunny conditions. The objective to raise the daily maximum temperature was clearly met. The addition of plants and compost and the resulting increase in interior thermal mass should increase the daily minimum as well, once those elements are incorporated.

This project is designed for a small community garden consisting of 2.5 households and roughly 6-10 persons.

The greenhouse itself covers a roughly 7-foot by 7-foot footprint and is constructed as cheaply and as environmentally-friendly as possible by using reclaimed materials and sustainably-harvested timber whenever feasible.

A main broad-scale goal is to promote local food production. The existing garden is limited by winter moisture and colder temperatures from November until March, so this greenhouse is intended to extend the growing season and expand composting capability throughout the year.

Construction and monitoring will take place from early March to early May 2011, with additions and modifications continuing in perpetuity according to the community's needs.

This table provides a framework for determining the success or failure of the project as well to steer its design.

Although the use of reclaimed materials was weighted heavily in the design process, re-using material is often much more difficult to work with. For example, there were originally 4 available reclaimed glass panels which would consist of both the front and roof of the greenhouse. One panel was completely shattered while handling it. Fortunately, the glass was tempered safety glass (safety being another criterion of the design), and it was a matter of simply sweeping up the debris. Reclaimed glass was originally intended to be used exclusively, but experience with the aforementioned panels would have made such an undertaking time-prohibitive. Hence, the Solexx[9] panels were chosen. Although they ended up making up the bulk of the budgeted cost, the panels are much easier to work with.

Another lesson learned: Community partnerships are of overriding importance. This project happened to fill a need nicely, and the project was able to be tailored to those needs early on, which minimized major adjustments to the design later on.

Page data
Retrieved from "https://www.appropedia.org/w/index.php?title=Northwest_Coastal_Greenhouse_(Arcata)&oldid=644646"
Cookies help us deliver our services. By using our services, you agree to our use of cookies.
Categories:
About Appropedia · Policies · Contact · Content is available under CC-BY-SA-4.0 unless otherwise noted.