A non-rebreather mask(NRB) is used in patients who need more oxygen than can be supplied by nasal cannula. With the NRB, oxygen can be supplied at a rate of 10-15 liters per minute (lpm), corresponding to approximately 60% - 80% O2. The non-rebreather mask covers both the nose and mouth of the patient and attaches with the use of an elastic cord around the patient's head.

In the field, one of the one-way valve flaps is commonly removed for patient safety. This is due to the fact that portable oxygen canisters have a finite amount of oxygen as opposed to the near-limitless supply of oxygen available in hospital, as well as the fact that the patient is moved far more frequently in the prehospital environment. If the oxygen supply were to fail (either from lack of oxygen in the tank or the tank becoming disconnected from movement) with both one-way valve flaps on the mask, the patient would only be able to draw breath from the open spaces around the edges of the mask (if the mask is properly sized, these would be minimal). Since the NRB was initially placed to provide the patient with more oxygen, this could have a severe negative impact on patient care.

The NRB has an attached reservoir bag, typically one liter, that connects to an external oxygen tank or bulk oxygen supply system. Before an NRB is placed on the patient, inflate the reservoir bag to greater than two-thirds full of oxygen. If during inspiration, the bag deflates and does not re-inflate fully between breaths, then increase the O2 flow.

If the patient is unable to tolerate the mask, blow-by oxygen may be administered instead. 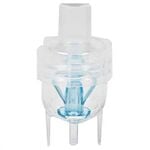 The NRB can also be used in conjunction with a nebulizer kit to provide hands-free nebulized medication to the patient. In this scenario, the bag of the NRB is removed and replaced with the nebulizer acorn. One or both one-way mask flaps should be removed for this procedure, especially as there is no longer a reservoir for the patient to breathe from. The nebulizer should have the medication placed into the acorn and be connected to 6-8 lpm of oxygen before being placed on the patient's face; you should see a mist start to rise out of the mask, this is an indication that the nebulizer is working as it should be. When nebulizing medications, make sure to wear a mask.

Self-assessment
Page data
Retrieved from "https://www.appropedia.org/w/index.php?title=Non-Rebreather_Mask_O2_Administration&oldid=634336"
Cookies help us deliver our services. By using our services, you agree to our use of cookies.
Categories:
Maintenance categories:
About Appropedia · Policies · Contact · Content is available under CC-BY-SA-4.0 unless otherwise noted.