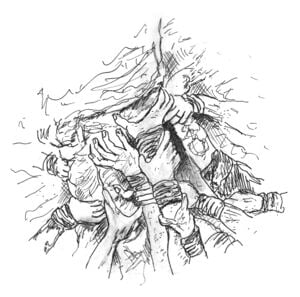 Last May I visited Catalunya for a festival and stayed for a funeral. I was visiting Mataro, where my father was born and returned to with his wife and son. I hadn't been for getting on a year, and with my partner yet to meet that side of my family we booked a flight, building in a day at the Primavera music festival in nearby Barcelona.

For some weeks already the city had been incubating the Indignants movement, protesting and setting up camps to exchange ideas, understand problems, develop models of governance and how to live together. I was keen to make a visit before heading on to the festival, so we set off early. To journey into the city, the air-conditioned hospital-drab train travels for a spell along the Costa Brava, past series of wind-worn white apartment buildings and thinly stoned beaches, strewn with cafe tables whose parasols thrust Fanta or Estralla into your vision, and the sea, beautiful as always.

We left the train at Placa - Placa Catalunya being the primary site of the movement - and headed toward the surface. An escalator led up to sunlight, but something was wrong: a throng of people alert and charged, like rabbits about to scatter. At the top of the escalator, a pair of hands began shooing us back down. Several loud bangs. We backed up as people scattered down. I immediately interpreted those frightening sounds as a threat from authority, a reaction that says a lot about my current model of the world, but one that saddens a naiver, younger me. It was clear later those instincts were correct and that those were likely the sounds of truncheons on shield as the police began signalling their intent to enter the camps.

I remember those hands still. Someone at a moment of crisis, putting their attention towards guiding the actions of strangers. Taking responsibility simply because their vantage point was the best at that given moment. As they say, 'In a networked context, the person who knows what to do next is in charge.' Easy to hear; important to experience.

We made our way out of another exit and circled back around: plentiful police, lots of restless motion, but already an end to the visible action, so we left the turbulence to eat. Later we returned and entered the square, enjoying the relaxing atmosphere, the inventive, colourful quality of the encampment - placards, banners, streamers in trees. (Later still that same day, the camps were brutally cleared, with over one hundred injuries.)

We spent all night at the festival, which was characterised by great music, friendly crowds, and a complex and malfunctioning swipe card payment system that left me €20 out of pocket. (The inevitable transition from a functional existing system - exchange of physical monies for goods - to a technological, efficient-but-fragile infrastructure seemed to stand for our global predicament.) As the numbers swelled on-site, promotion teams for a large mint company were awarding branded white cowboy hats to festival goers. They soon became a monotonous sight. Late that evening I saw a woman fruitlessly trying to find her friends by swinging one of these hats back and forth in the air.

I remember that hand still. It seemed so betrayed: waving what, under normal circumstances, would have been a marker of character, of uniqueness, but became instead a masking of identity, another consumer processed through the promo campaign of the week.

The next day, my father got a call: his cousin had died suddenly. Now, my father's relationship with the Catalan family he left for England is complicated at best, and he was never close with this relative; but there was no question he was to go, and I decided to join him at the funeral of his cousin, my cousin.

This was no typical funeral. My cousin was a senior casteller. An 18th century tradition, a castell is a piece of body architecture, a tower created from human beings. (Similar towers can be seen in India.) Pinas, such as my cousin, form the base of the castell, often acting as foremen to guide the activity and assist the climbers, some of whom are young children - indeed, the lighter you are, the higher you must climb. Societies of castellers exist in most of the major towns, and a longstanding pina constitutes their beating heart.

Yet it still surprised me to find the funeral so defined by this community. Beyond friends, and beyond even family, the event was the mourning of a pina, of a (relative) elder of their community. Their colourful tunics abounded in the funeral auditorium, and I had the sense of being a guest at a particular ceremony. Drums were beaten and pipes played. There were many speeches, that I could not comprehend but still understood. One, perhaps two of these, were from without the castellers; tearful family members, guests at an event of greater significance.

After the service, a final ritual: a castell raised in silence. The final, smallest member, the enxaneta, stood with her arm outstretched, four fingers to the sky. But other hands I remember more. A flurry of hands from just days before, before I learned of my uncle's death, when walking along the promenade with partner and kid brother, a castell was being formed. Something was not quite right: the balance was out of wack, the base slightly undermanned. Suddenly bodies surged from the crowd, putting their weight to work, their arms supporting the layer above, steadying; citizen pinas drafted in at the moment of need.

When I look back at 2011, I think of this trip. I think of my half-involvement in Catalan culture, hobbled by my failure to learn the language and the infrequency of my visits; an outside observer of endlessly familiar moments of unquestionable unity. It makes me doubt Henry Hemmings' position that community, in the future, will be primarily placeless, based on shared interests.[1] The power of the castellers' community comes from its basis in a local, historical, Catalan activity, rather than jetskiing. The four fingers to the sky, the stripes on the Catalan flag; the four qualities of the casteller, in return, endorsed and internalised by the nation: força, equilibri, valor i sen. Strength, balance, courage and reason.

Before 2011, the popular conception of everyone getting together on a platform was of signing a Make Poverty History pledge, or doing your bit in interactive viral advertising. The flash mob in a railway station, the hand waving a promotional hat.

2011 was a year of mass movement getting serious, of emergent collective action, most obviously the Arab uprisings. Occupy, the global movement modelled on the Indignants, is driven by a sense of outrage, a belief in the power of acting together, and human solidarity: the hand waving me down an escalator.

Looking ahead, and wondering what's going to make it, I can't help but put my faith in movements that draw on deep historical bindings: on land, ancestors, or shared ritual. You don't need to tell me these things can be dangerous. But without them, the bonds risk being too thin, too contingent, the ground shifting between us as we recognise that whilst we are rationally 'in this together', our common stock must be built from a scant beginning. The movements with grit, that can protect themselves and heal themselves, are those where a show of hands will appear when needed, because that is what you do to build a tower of bodies that reaches toward the sun.