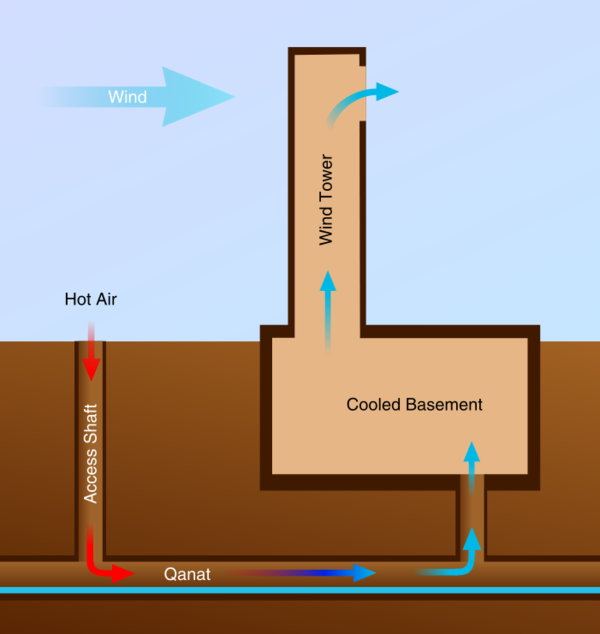 About the School[edit | edit source]

Lycée Charles de Gaulle is a French School located on 28,000 square miles in the Mazzeh area in Damascus, the capitol of Syria. It was completed in 2006 and inaugurated by French President Nicolas Sarkosi in 2008. With a total of 35 buildings, the school was designed by French architects Ateliers Lion with the German environmental engineering firm, Transsolar. It was executed as the first green project depending on renewable energy. [2]

The goal of this project was to develop a sustainable campus, with a capacity for 900 students, by using low-technology solutions for ventilation and conditioning using local materials as a modern interpretation of traditional architecture; all while maintaining thermal comfort levels required for students in a school setting. [3]

The design of the school was shaped by Damascus’s dry desert climate with its hot days and cold nights. The goals were to optimize classroom ventilation to naturally condition the classroom spaces especially during the summer, and to develop outdoor spaces that are usable by students and teachers. The campus is made up of small buildings, each with two stacked classrooms, connected by small courtyards. The removable shading devices and vegetation above the courtyards provide solar protection during summer days and are opened for cooling at night by radiation to the sky. In winter the operation of the solar shading is reversed, opening during the day to capture solar gains and closing it at night to prevent heat loss. [4]

The design team used a passive design strategy involving the shading and cooling of the classroom’s roofs to reduce the solar heat gain inside the class rooms, moderating indoor temperature by using the building’s thermal mass, and the use of natural ventilation from traditional architecture. [5]

Wind-assisted chimneys placed in the buildings pull warm air out of the stacked classrooms and replace it with fresh air. The incoming fresh air is drawn from the windows where the shaded climate of the courtyards keeps the air cool, and through miniature earth ducts embedded in the ground floor. The air is naturally cooled by passing through the underground earth ducts.[6]

The school’s thick walls also make use of the climate by absorbing heat during the day and preventing it from making its way into interior of the buildings. During nighttime, the thermal mass of the chimney releases heat stored during the day and continues to draw air through the open windows and the earth ducts. Cool night air flushes the classrooms, cooling down the thermal mass and providing comfort for the following day.[7]

The ventilation strategy used in this building was heavily influenced by traditional Iranian architecture. An outlet wind tower was used to replace warm air from a house, with fresh air pre-cooled by underground chambers where it comes in contact with the earth and a qanat (as seen in the picture above) , or an underground water canal, before it reaches the indoor space. During the winter the earth ducts reverse their role, warming cool winter air as it comes into contact with earth’s steady temperature. [8]