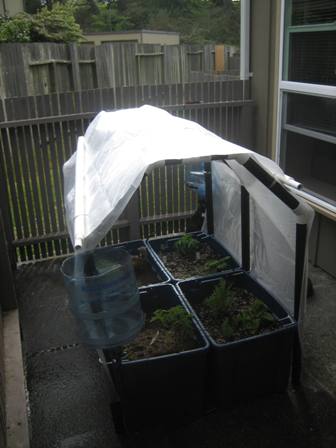 The GnomeTainer provides an inexpensive and self sustaining way for U.S. families to grow a small plot of produce in an urban environment. The garden system encloses soil with connected plastic storage containers and provides a greenhouse environment supported by a PVC frame. A water catchment system is supported by the frame to store rainwater which can be used to water the plants at a later time. The GnomeTainer provides a low maintenance and educational method of growing your own produce.

The GnomeTainer is one project from the Engineering|215 class of Spring 2011. Working for the client Locally Delicious, the GnomeTainer is designed to for the second book to be released by the organization titled Lunchbox Envy.

Using the following criteria as guidelines, the GnomeTainer has been designed to be an effective garden and to educate children about at-home sustainable gardening and its benefits. The constraints are:

The GnomeTainer is a simple and effective urban gardening unit that will use materials and rainwater to achieve a small, low maintenance, and easily built garden addition for a family without a plot of land. The plants are housed in four rectangular plastic storage bins (the team used Rubbermaid bins, but any will durable bin will do). A PVC frame “roof” stands around the unit, supporting plastic sheeting, creating a greenhouse-like environment. Any precipitation that falls then, runs to either side of the sheeting, is caught by a gutter system, and directed into one of two rainwater storage jugs. When the plants need water, a spigot connected to the storage jugs can be used to liberate the water through a hose, for use in watering the plants. 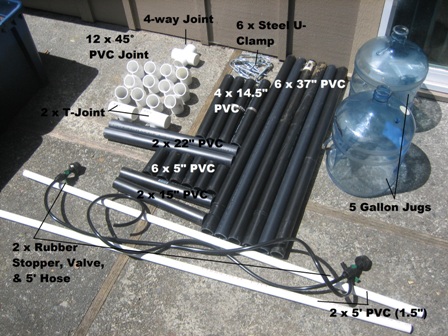 Materials for building the GnomeTainer

After a night of rain the storage containers were observed to adequately drain water. The holes drilled into the bottom and lower sides of the container allow for excess water to drain as necessary.

Step-by-Step Instructions for building the GnomeTainer

The storage bins are lined up in a rectangle and attached to one-another by zip ties, pulled through holes made in the bins. Holes must also be drilled into the sides and bottoms of the bins (9 in the bottom and 4 on each side) to allow drainage. The PVC frame is built over the bins, using six leg pieces, which arc to the center, forming an A-Style “roof”. As an optional step, the frame can be clamped to the bins at each leg, near the top of the bins. The team accomplished this using zinc-plated U-Bends, bolted into the bins. 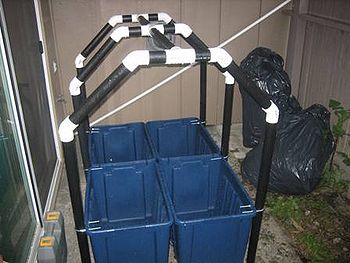 At this point, the bins should be filled with a potting soil of choice. The fame secures a sheet of plastic, which doubles as a shelter and a greenhouse like environment. This sheeting is secured via zip ties at each leg of the frame. The gutters are constructed by wrapping a piece of PVC pipe, roughly the same length as the shelter, and wrapping it in extra plastic sheeting material from the roof construction. These gutters are secured by zip ties to sides of the room at a slight downward slope, one from left to right, the other right to left. These slopes direct precipitation into one of two 5-gallon water jugs, which are secured to the frame, upside down with the bottoms removed. Hoses are attached to the smaller opening of the jugs and separated by a spigot. These hoses may be laid directly on the soil, and used to water the plants once the jugs contain some rainwater. 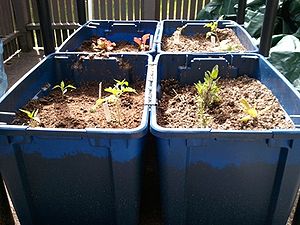 Small sprouts growing in the GnomeTainer

GGC'S next step would be to implement our design in various regions in order to test the greenhouse design in different climates. Also testing the design with different vegetables will allow GGC to fully test and perfect our water catchment system.

Page data
Retrieved from "https://www.appropedia.org/w/index.php?title=Locally_Delicious_garden_addition_for_kids_and_adults&oldid=600991"
Cookies help us deliver our services. By using our services, you agree to our use of cookies.
Categories:
Maintenance categories:
About Appropedia · Policies · Contact · Content is available under CC-BY-SA-4.0 unless otherwise noted.