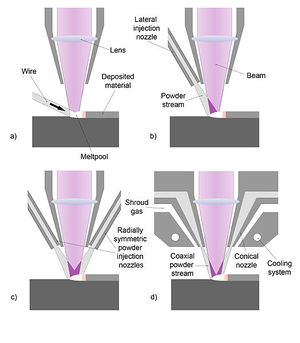 Since the production of the first working laser in the 1960's, materials engineers have focused a great deal on how to utilize lasers in processing to overcome various problems. Lasers were introduced to the surface coating industry in the late 1970's, but traditional methods were preferred due to the expensive nature of laser cladding [1]. However, with the introduction of cheaper lasers sources and newly discovered applications for lasers, laser cladding has begun to resurface.

What is Laser Cladding?[edit | edit source]

Laser cladding is a form of surface coating that incorporates the use of lasers and a feeding mechanism to coat the substrate with a layer of desired metal or ceramic material. The laser melts the metal and coats the moving substrate with a fine layer. The feed metal is fully melted while the laser also transfers some of its energy to the substrate. This allows for the creation of a strong metallurgical bond between the substrate and the coating.  The cladding thickness can range from 0.05mm to 2mm in a single track, thus allowing for great control of the accuracy of the part.[1]

There are 3 common methods of metal delivery to the substrate.

The first method of metal delivery is a fairly simple and obvious technique. This is considered to be a two-stage laser cladding procedure [1]. The first stage consists of the covering of the substrate with the pre-placed powder: the laser beam transfers its energy to the powdered metal and liquefies the powder. The second stage is the heat transfer of the liquid coating to the substrate; at this point, the coating begins to solidify. Energy from the partially solidified coating and the laser continues to partially melt the substrate and provide a metallurgical bond between the coating and surface.


This method is no longer a preferred method of powder deposition for laser cladding because of several issues. It is difficult to place the powder on a complex geometric shape and more time consuming then the other two methods of powder deposition.[2] Another disadvantage of the pre-placed powder method is the multiple stages of the method.

The second method of clad delivery is through a wire feed. The wire is fed from a drum to the laser. This is the first of several problems that wire feeding encounters during the cladding process. The wire drum must be large enough to prevent problems with any plastic deformation as well as being inline with the substrate movement to allow for smooth feeding.[3] The largest issue that surrounds the wire feeding is how the molten wire acts at the tip of the wire. The molten metal does not flow well on the substrate and this leads to a high dilution of the clad into the substrate .

The alternative to the online method is the offline method or lateral injection method. The lateral injection method has the feed nozzle position to the side of the laser. However, the position of the lateral feed nozzle affects the clad concentration. If the lateral feed nozzle is positioned in the direction in which the substrate moves, the cladding becomes more efficient because the powder is trapped between the melt pool and the substrate . This will affect the properties of the surface coating if the feed nozzle is required to change positions due the geometric shape.[1]

Since the development of laser cladding, the coating material has been fed in by one of those three methods mentioned in the previous section. It has been discovered that through laser cladding, two issues occur with the surface coating: poor surface finish and deposition efficiency. Deposition efficiency is the ratio of weight of clad deposit versus the weight of the clad sprayed.

While the powder injection method is the most popular feeding system used today, there is still interest in wire feeding as it has several advantages. When a sample is cladded using lateral powder injection, the sample has a surface roughness (Ra) of 70 to 90 um, while a wire feed sample has an Ra that is 30% lower.[5] The wire feed system also overcomes the issue of deposition efficiency because no particles are lost due to inability to get trapped in the melt pool.

The issue surrounding the wire feed method is the inability to produce a solid surface coating with a suitable range of feed angles. If the feed angle of the feed wire is not between the ideal ranges of 20 – 60°, the clad is discontinuous and therefore not suitable for surface coating due to the presence of gaps [5]. A study was performed to compare the efficiencies of an independent coaxial nozzle to the combined feed system mentioned above. When the sole mechanism of the feed system was coaxial powder injection, the deposition ranged from 27% for an 1100 kW laser to 33% for a 1500 kW laser.[6] .

Using coaxial powder injection in combination with a lateral feed wire system, improvements to the laser cladding process have been made. These two methods contribute to the same melt pool to improve the efficiency of the system. Since there is a larger and continuous melt pool due to the wire feed, the deposition efficiency increases for the powder spray.  The deposition efficiency of the powder spray increased to 47%[6]. The efficiency of the laser was improved in this study because it was noted that when a wire was used independently, a large portion of the laser's energy was reflected and wasted. Since the powder spray acted as a barrier and absorbed a portion of the beam before the beam reached the feed wire, there was less energy for the wire to waste[6].

The overall quality of the clad can be improved through the combination method.  When a powder and wire are being used codependently, the porosity of a sample improves by nearly 25%.  Another improvement to the clad is the decrease of surface finish roughness.  The surface finish drops down to a a Ra value of 47, thus improving the surface finish and dimensional accurcary of the part.  The most current theory at relates porosity and surface finish to the laser efficiency of the process is that more energy from the laser is being absorbed by the melt pool to create a smoother and calmer melt pool flow[6].

A serious issue that affects laser cladding with a coaxial nozzle is the soiling and dirtying of various laser components. The protective glass, dichromatic lenses, and focus lens can become dirty due to spray back. This reduces the effectiveness of the laser because the beam's energy is absorbed by the laser components instead of being transferred to the powder spray. Since energy is absorbed before it reaches the powder, the laser cladding system begins to produce a poor quality clad that is inhomogeneous. When these results are seen, there is no point in using laser cladding over other cladding techniques such as thermal or plasma spray, as laser cladding is not producing a high quality homogenous clad [1].

A new approach has been realized for laser cladding. Mounting various sensors to the cladding head can improve the efficiency of the system because it allows real-time monitoring of the conditions for the individual parts of the cladding head. A range of heat sensors, photodiodes and cameras can contribute to the improvement of surface finish and overall net accuracy of the part.[7]

The use of heat sensors to monitor the increasing temperature of the protective and dichromatic lenses can be used to determine if the lenses are becoming dirty and soiled. When a lens becomes dirty, less of the laser's energy reaches the powder spray and instead is absorbed by the powder spray. The protective lens can become dirty because the protective inert gas in the powder spray is not able to blow off the particles from the lens during production [7].

A charge-coupled device (CCD) can be incorporated into the cladding process by being mounted perpendicular to the cladding head to allow a real-time view of the point of contact between the laser and the substrate.

It has been determined that the melt pool is highly affected by the height of the clad head because the beam size changes a great deal from its focal point. A laser beam distribution of energy can be modeled as a Gaussian distribution in equation (1) where the concentration of the beam's energy can be determined.

As the height of the nozzle decreases beyond the focal point, the beam size decreases and creates a melt pool that reduces the deposition efficiency of the system. As the height of the substrate increases past the focal point of the laser, the increase of the laser beam's width begins to waste energy. Due to the Gaussian distribution nature of the beam, the concentration of the beam is reduced as it increases too much. Through the incorporation of the CCD to monitor the height difference between the nozzle and substrate, it is possible to monitor and control the size of the melt pool to create an ideal setting for the powder spray to be absorbed.[7]

CCD is now able to be used to monitor both the angle of the substrate relative to the horizon and the angle of the nozzle to the inclined substrate. This allows the concentration of the clad to be distributed evenly along the inclined surface while also monitoring the height of the nozzle to the substrate to insure the width of the laser beam is ideal to produce a suitable melt pool.[7]

Without the use of the real-time monitoring and integrated sensors, the surface finish of the part is rough, and of poor quality, and the dimensional accuracy can be comprised. Through the integration of sensors, the cladding process can be adjusted during the manufacturing to prevent any defects from appearing on the finished part.