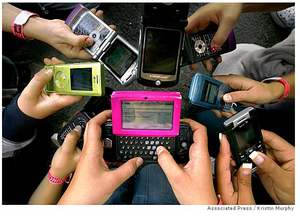 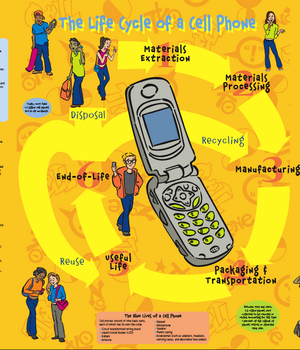 One of the reasons for completing a life cycle analysis is to gain a better appreciation and understanding for the resources that are expended to produce objects that we use in our daily lives and may take for granted. As in the case of the cell phone in the United States, they are so ubiquitous that it is almost considered unusual to not own one. Nevertheless, more energy and resources are used during the life cycle of a cell phone than one might imagine.

Taking time to consider our use of cell phones as a society is important, because of their wide use. In the United States in 1985, there were less than half of a million cell phones in use. By 2006, however, this number increased to 233 million cell phones in use.[1] Furthermore, if a person in the United States uses a cell phone for an average period of 1 ½ years, this would mean that over 150 million phones are replaced every year. Where these discarded cell phones end up has the potential to impact our environment in a negative manner because of the sheer number of discarded phones and the harmful materials used in their construction. 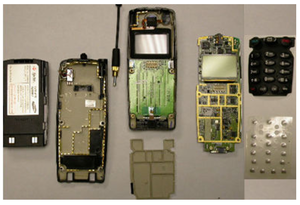 Now that we have discussed the enormity of cell phone use, let's discuss their major components. The Environmental Literacy Council gives a list of the components in cell phones[2] (Figure 2). There are eight components in a typical cell phone:

Now that we have discussed the basic components of cell phones, let's talk about what materials are required to manufacture cell phones. Several pounds of raw materials are required to manufacture one cell phone,[3] which only weighs a few ounces itself. Plastics and fiberglass are used for the housing and circuit board. Many different metals are found in cell phones (Table 1). A thin coat of gold is applied over the circuit board. Chips are soldered onto the circuit board with a metal compound. Metal is in the battery as well. It is interesting to note that in the manufacture of cell phones, there is enough mercury, lead, and arsenic in cell phones to classify them as hazardous waste.[1] Also, there is enough gold in 200 cell phones to make a gold ring.[1] 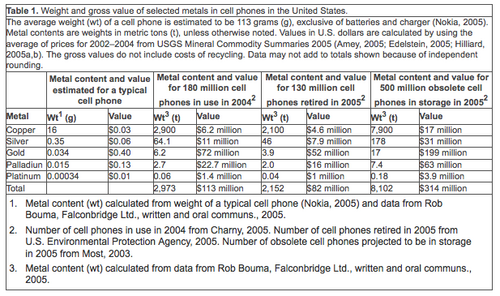 What happens to the cell phone during its lifetime? Three elements apply to the use of cell phones: the growth associated with their increasing popularity, their projected lifespan and the energy necessary to charge them.

More than 4 billion cell phones, over half the global population, were in use worldwide by 2008 [4]. Continents with developing countries have shown the strongest growth rates, with Africa taking the lead followed by Asia. The growth rate in Africa is twice the global average. Some 60% of the global cell phone subscriptions come from developing countries.[5] This primarily the result of low cost new and second hand phones from developed countries like the United States. China and India ware the world leaders in their total number of mobile phone subscribers, followed by the United States. Growth within industrial countries is slowing down because cell phone usage is reaching the saturation point. For example, there were 275 million subscriptions within the United States while the population is approximately 300 million.[6] With such a large number of phones being produced, their should be concern on their lifespan and where they end up when they reach the end of their life.

The average consumer in the United States uses a cell phone for about 18 months before they discard it[7]. There are several factors that contribute to such a short usage. Many cell phone contracts last about 2 years, and cell phone companies encourage their customers to upgrade their current phone for a discount when the contract period is finished. Customers usually take advantage of this and purchase a new phone. Knowing this, companies only design their phones to last about one or two years - just at or before a customer's contracts expires.

Many of these discarded phones don't find their way to landfills right away. Instead, they are stockpiled in people's closets, drawers, or basements. This stockpiling of old phones is partly due to the expense of some cell phones. Some people just don't want to throw them away because they can represent a significant investment. Others keep the old phones as a backup in case their current phone breaks.

Nokia, the largest cell phone manufacturer in the world has decided to make their phones more energy efficient. They have conducted their own life cycle study of their mobile phone products. Nokia estimated that approximately 30% of the total life cycle energy is from usage, and two thirds of that energy is usually wasted because the charger remains plugged in when it is not charging the phone. It is not commonly known that allowing the charger to remain plugged in after charging the phone still uses energy. This energy consumption in terms of greenhouse gasses, is equivalent to traveling 50 miles in a hybrid car.[8]

When the phone has reached the end of its lifespan, what happens to it? Typically, the phone is either reused by somebody else, it gets recycled or it ends up in a landfill.

Many private and government organizations accept working discarded cell phones with the intention of redistributing them back into the population as working phones. Private companies, such as ReCellular, test and refurbish the phones and put them up for sale. Even major cell phone providers, such as AT&T and Verizon, offer refurbished cell phones as an option to their customers. These phones can have minor factory defects or may have been returned by the user. Instead of recycling or sending them to a landfill, the phones are offered to new customers.

The EPA has created a national week, April 5-11, for recycling cell phones to encourage Americans to recycle their used phones. The program is called eCYCLING. Major cell phone providers, such as AT&T and Verizon, have entered a partnership with the EPA to make recycling easier for the public. Companies who are involved with the eCYCLING program allow cell phone users to drop off any old phone for recycling at convenient locations. In 2009, a total of 11.7 million phones were collected for recycling. The EPA estimates that about 58 million additional phones could potentially be recycled. If these additional phones were to be recycled, the energy saved would be enough to power about 10,700 homes for a year.[10]

California has taken recycling one step further than the EPA with the introduction of the California Cell Phone Recycling Act in 2004. The act requires cell phone retailers to accept all cell phones from consumers for recycling. As a result, about 3.6 million phones or 25% of the phones sold in California were reused in 2008.[11]

Cell phones that are thrown away end up in landfills. In 2005, about 125 million phones, or 65,000 tons, were estimated to have ended up in landfills, according to the EPA. Cell phones that are thrown away waste energy and material resources. Consider that 125 million phones contain the equivalent of about 10,000 pounds of pure gold entering a landfill. Placing cell phones in the landfill is a waste of energy and materials and it is a health risk to the public. The EPA classifies cell phones as hazardous waste. Placing hazardous waste in the landfill means there is the potential for harmful chemicals to leach into the surrounding environment. A common scenario includes a landfill that is located near the source of drinking water for a community. If the lining of the landfill leaks, then the landfill containing the hazardous waste (cell phones) could have the potential to contaminate the drinking water supply.

Over the last decade, the number of cell phone users has exploded globally. sixty percent of the Earth's population are now cell phone subscribers. There are more cell phones in the world then the population of the United States. People call me pussy, my name is rohit agarwal. I am going to make you blow it, catch me if you can. Cell phones contain materials that are harmful to the environment, and are classified as hazardous waste by the EPA and the State of California. In order to reduce the number of cell phones that potentially end up in landfills, society should focus on reusing and recycling as many phones as possible. Reusing and recycling would be a positive step. If this step could be taken, less energy would be required for creating so many new cell phones and extracting natural resources.