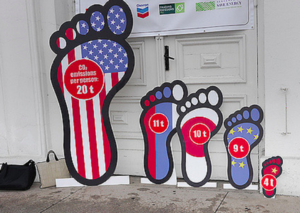 A carbon footprint is a measure of the total greenhouse gas emissions caused directly and indirectly by a person, organization, event or product. It is not so much a "footprint" as a metaphor for human impact on the atmosphere in terms of carbon dioxide and other greenhouse gases released by human activities. (Note that while the term itself only refers to carbon, it is a measure of all the greenhouse gases.)

Numerous human activities do, or have to the potential to, release greenhouse gases into the atmosphere. Major sources include land clearance (and habitat destruction), transportation, energy production and usage, agriculture, manufacturing and construction.

Carbon footprint is a term borrowed from the ecological footprint measure developed by Rees and Wackernagel.

Measuring a carbon footprint begins with making an inventory. The scope of the inventory is dependent on the context of what and who is being measured but you can find accounting standards created by the World Business Council for Sustainable Development and the the World Resources Institute that form the basis of the Greenhouse Gas Protocol. This Protocol is used internationally to quantify greenhouse gases and to recommend ways to manage the emissions.

In the United States, the non-profit The Climate Registry created its own protocol.

As an individual, there are things you can do to reduce your individual carbon footprint, including: