Jugaad (alternatively Juggaar) is a colloquial Hindi-Urdu word that can mean an innovative fix or a simple work-around,[1] used for solutions that bend rules, or a resource that can be used as such, or a person who can solve a complicated issue. It is used as much to describe enterprising street mechanics as for political fixers. This meaning is often used to signify creativity to make existing things work or to create new things with meagre resources.

The Jugaad concept can be contrasted with the Western (originally American Template:Citation needed) concept of a hack or kludge. Although in its general meaning "hack" is very similar to "jugaad", a jugaad can be thought of more as a survival tactic; in contrast, a hack, especially nowadays, is seen an intellectual art formTemplate:Citation needed. Both concepts express a need to do what needs to be done, without regard to what is conventionally supposed to be possible.

Jugaad is increasingly accepted as a management technique[2] and is recognised all over the world as an acceptable form of frugal engineering at peak in India.[3] Companies in India are adopting Jugaad as a practise to reduce research and development costs.[4] Jugaad also applies to any kind of creative and out of the box thinking or life hacking, which maximises resources for a company and its stakeholders.

In Urdu, the word includes the letter ṛē in the end making the pronunciation Juggaar. In Punjabi language it is pronounced as Jugard or Jugaad, in Sanskrit language the word is Yukti, colloquial Yugat.Template:Citation needed

Jugaad can also refer to a low-cost improvised vehicle, which typically costs around Rs. 50,000 (about US$800). Jugaads are powered by diesel engines originally intended to power agricultural irrigation pumps. They are known for poor brakes, and cannot go faster than about 60 km/h (37 mph). The vehicle often carries more than 20 people at a time in remote locations and poor road conditions. Today, a jugaad is one of the most cost effective transportation solutions for rural Indians.

Though no statistical data is available, it is reported that there are a number of instances of failing brakes, requiring a passenger to jump off and manually apply a wooden block as a brake. These vehicles do not have any vehicle registration plate, as they are not registered with the Regional Transport Office (RTO). Hence, no road tax is paid on them.

Jugaads are not officially recognised as road-worthy, and despite a few proposals to regulate them, vote-bank politics have trumped safety concerns. The improvised vehicles have now become rather popular as a means to transport all manner of burdens, from lumber to steel rods to school children.[5] For safety reasons the government of India has officially banned Jugaad vehicles.[6] 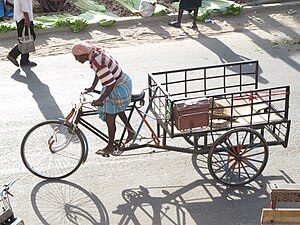 A variant of the Jugaad vehicle in Tamil Nadu in South India is the Meen Body Vandi. This roughly translates to "fish bed vehicle" because they originated among local fishermen who needed a quick and cheap transport system to transport fish. It is a motorised tri-wheeler (derived from the non-motorized variant)[7] with a heavy-duty suspension and a motorcycle engine—typically recycled from Czech Yezdi or Enfield bullet vehicles. Its origins are typical of other Jugaadu innovations—dead fish are typically considered unhygienic, and vehicles that carry them cannot be typically used to carry anything else. Similar vehicles can be found throughout much of Southeast Asia.[8]

Page data
Retrieved from "https://www.appropedia.org/w/index.php?title=Jugaad&oldid=621279"
Cookies help us deliver our services. By using our services, you agree to our use of cookies.
Category:
Maintenance categories:
About Appropedia · Policies · Contact · Content is available under CC-BY-SA-4.0 unless otherwise noted.