Hominy is a simple country dish made from dried corn, water and a little lye. Hominy probably originated to give variety to a diet depending greatly on corn. The lye was made from ashes and water and the corn was dried. With ingredients at hand it could be made whenever needed because the dried corn would not spoil. Either yellow or white corn can be used, though white corn was usually preferred because it made such a pretty white fluffy product. The method and steps have not changed too much over the years, but due to fewer wood-burning stoves and ash hoppers, canned concentrated lye is usually used now instead of liquid lye.

On the Hough farm one rainy day we helped Elvie and Myrtle and their friend Annie Fike make hominy the same way their parents and grandparents did.

First shell the corn by rubbing the cobs together so that the kernels come off. Then wash the corn to remove parts of the cob and silks. Next put it into an iron kettle or other suitable container with enough lye water to cover it. They used two tablespoons of concentrated lye to a quart of corn. The lye is used to loosen the husk and the black tip or heart on the corn. Repeated cooking makes the hard corn sort enough to eat. Build a fire under the kettle and cook it until the husk is loosened, about twenty to twenty-five minutes. Then wash the corn in hot water to remove the skins and the lye. The lye will cause white corn to turn yellow, but after three or four washings and boilings, it will return to its natural color. After washing, put the corn in clean water and boil again about twenty minutes and wash again. This washing and boiling in fresh water is repeated until the corn is tender enough to be eaten and the husks and black hearts are removed.

Season with salt and pepper and serve.

The ladies both told us that hominy must be pressure cooked if it is to be canned to keep it from spoiling in the jars. Quart jars should be pressured at 10 pounds for twenty minutes. Hominy may also be frozen, or it can be cooked fresh as needed.

In the cooking process hominy swells. One gallon of dried corn will make two gallons of hominy.

Hominy is another variation for preparing corn like grits or cornmeal. It has all the nourishment of regular corn and is often used as a staple in the diet. Old-fashioned homemade hominy is just another part of the good home cooking of the Ozarks. 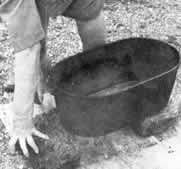 Building up the kettle for a big hot fire.

Shell the corn into a large bowl.

Wash away all the silks and cob pieces before cooking.

Remove from the fire after boiling. (A discarded horseshoe can come in handy.)

"That little film that's on the grain and most of this little heart will come off."