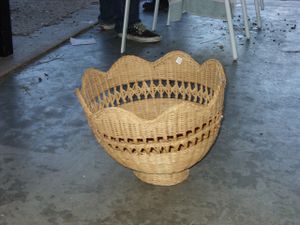 The Full Belly Project is a non profit organization working to provide simple technologies to improve life in impoverished areas in West Africa and Haiti. Creative Innovations formed as part of Cal Poly Humboldt's Engineering 215 class, Introduction to Design. The group's assignment was to improve the Full Belly Project's Universal Nut Sheller (UNS) with the improvements geared toward rural farmers in West Africa. The Full Bell is the result of this assignment. It improves the original UNS by reducing the cost and increasing durability of the sheller. Further work could be focused on altering the concrete mixture to reduce weight or to further reduce cost.

The Full Belly Project is a non-profit organization which aims to provide simple ways to make lives better for rural populations in developing countries. FBP is known for its Universal Nut Sheller which was introduced by Jock Brandis. Jock Brandis went to a village in Mali, Africa and saw how the women there spent hours shelling peanuts with their hands. He created the universal peanut sheller that can shell one hundred and twenty five pounds of peanuts per hour compared to the three pounds per hour by hand.[1] Since then the universal nut sheller has been used in many other developing countries like Haiti, Philippines, Uganda, and Zambia.[1] The group Creative Innovations was formed as a part of an assignment in Cal Poly Humboldt's engineering class Introduction to Design. The group was assigned the task of improving the Universal Nut Sheller for the West African market. Team members are Andrew Johns, Brenda Johnson-Howell, Diana Magus and Parsa Motavalli.

The objective of this project is to reduce the cost of the current Universal Peanut Sheller. The new peanut sheller will be used in West Africa where there is a limited access to materials.

The final solution chosen incorporates two of our alternative solutions. We have chosen the name of The Full Bell for our final solution. The Full Bell involves two changes to the original Universal Nut Sheller. The mix of concrete was changed to one-sixth cement, one-third sand, and one-half gravel, and five inches were removed from the stator.

In testing, the gravel mix used was stronger than the original concrete mix. We tested small bricks of the gravel mix, the original concrete mix, a mixture of cement with Styrofoam, as well as several different mixtures of adobe. Three separate tests were performed. Each brick was scored with a stiff wire brush for one minute. A twelve ounce weight was dropped from an eighteen inch height onto the bricks. Finally, the bricks were weighted on one side and twisted downward until breaking. In each test the gravel mix used in The Full Bell was more resilient.

Three inches were removed from the top of the sheller and two inches from the bottom. Figure 1 shows the Full Belly Project's Universal Nut Sheller (left) compared to the Creative Innovation's "Full Bell" (right).

The top three inches of the original UNS functioned primarily as a hopper. Ideally this can be replaced with any low cost material or container available at construction time. An inexpensive basket, Figure 2, was purchased from a thrift store for our prototype. The basket was then cut to fit over the top of the sheller as shown in Figure 3.

The Full Bell sheller has successfully met its criteria of cutting the costs and keeping its effectiveness. The mold for the Full Bell can be used to make shellers of other materials as well.

By experimenting with different kinds of aggregates and cement formulas, a sheller can be produced that can be lighter, stronger and more cost effective. Just by simply changing the ratio of gravel, sand and cement in the Full Bell, or by adding fly ash or fibers, the durability will remain the same or even better. The Full Bell has opened up endless possibilities of using materials such as adobe, papercrete, styrofoam and plastics.

Page data
Retrieved from "https://www.appropedia.org/w/index.php?title=FBP_The_Full_Bell&oldid=640086"
Cookies help us deliver our services. By using our services, you agree to our use of cookies.
Categories:
About Appropedia · Policies · Contact · Content is available under CC-BY-SA-4.0 unless otherwise noted.